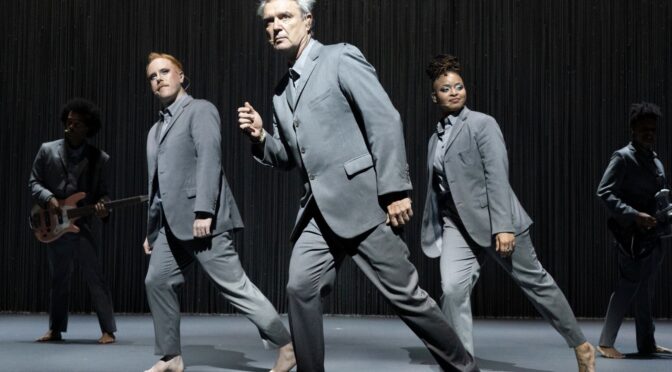 Spike Lee takes us on a journey through David Byrne’s broadway hit AMERICAN UTOPIA, joining the audience for a night of Talking Heads hits, political commentary and the right amount of kookiness you would expect from a night with Byrne.

The show delivers outstanding renditions of Lazy, This Must Be the Place, Once in a Lifetime, Everybody’s Coming to My House, and Road to Nowhere among other Byrne songs and entrancing covers. But this is no ordinary gig, high art stage production, or your run of the mill “concert film.” Byrne presents to us a rather transcendent experience, using his lyrics to inspire political reform, interpersonal social discussion, and a night that will stay with you long after the curtain falls.

The theatrical set looks a little like something from a David Lynch film, quickly introducing the notion that audience members and remote viewers alike are in for something more experimental than your typical concert. There are wiry looking black blinds covering the stage exits for the majority of the show, with a very minimal set and piercing white light which fills the performers’ arena. It looks a little like somewhere you would awaken in a horror movie if aliens were about to study you. But amongst the weirdness, there is, nonetheless, method in the madness. With much of the show communicated via dance and travelling instruments, there is, as Byrne rightly exclaims, nothing more interesting than looking at people – and, in this case, the band, dancers, and performances were certainly more eye-catching than traditional set pieces.

Spike Lee’s direction amplifies the messages within the show, from close-ups into the interactive stage performances, to a heartfelt montage sequence of images showing the members of the black community who have been murdered during police brutality, during an intoxicating cover of Janelle Monáe’s Hell You Talmbout.

David Byrne’s assembly of political discussion, kinesthetic presentations, and metaphysical monologues manages to erode the barriers of cinematic categories and traditional Broadway narratives. It is a production that revels in its unorthodox performance and somehow manages to form a deep connection to its audience. Despite how disjointed and erratic the production manifests itself to be, it is much more than Byrne and his band throwing socio-political jargon into the void and seeing what sticks. Byrne’s carefully crafted, in-touch discourse and eccentricity manages to make the thematics of the show more profound than could be imagined.

There will be much debate as to what this film is – if it is a film at all. But what can be deduced from the experience is that utopia is far from our grasp, and our understanding of what utopia is, is far from universal. Maybe in amongst the half-baked philosophies of AMERICAN UTOPIA there is a point of lucidity: perhaps if we applied the earliest modes of thinking, the most simplistic values we learned from very early on in life and applied them more often, the world may be much easier to comprehend.