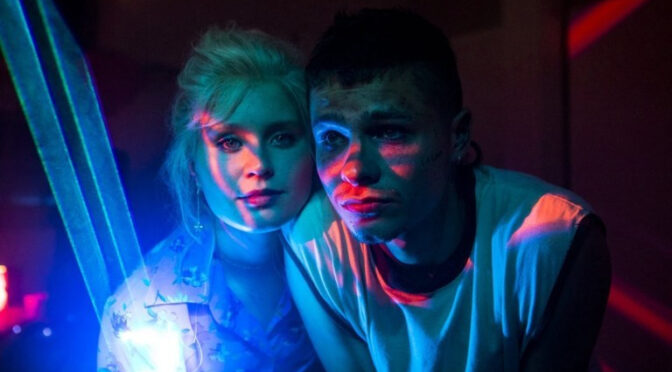 Shannon Murphy’s debut feature BABYTEETH is about a seriously-ill teenager called Milla, played by Eliza Scanlen, who befriends homeless addict Moses (Toby Wallace) just after he charges towards a train, leading to a blossoming, un-expected romance.

Milla’s parents Anna (Essie Davis) and Henry (Ben Mendelsohn) try hard to strike the right balance with their daughter, but the lingering reality of her terminal illness is a heavy weight. They do their best to protect her while letting the reins rest in Milla’s hands as much as possible so she can enjoy the time that she has. They struggle with Moses’ junkie traits and carelessness, but they cannot quite entirely shun him, seeing the spark he brings to Milla’s world. She continues to attempt playing her violin alongside her piano-playing mother, and attending school when she feels well enough, but the story mostly hinges on her emotional rollercoaster using sharply edited shots and dreamy cinematography.

Eliza Scanlen gives a spirited and electric performance, capturing Milla’s need for rebellion, while still being tender and vulnerable. She is grounded by her resolve and is not entirely fearless, yet retains a strength in her determination. Her relationship with her parents is understandably tense and her mother’s protectiveness drives Milla more towards her father. While she does not manage to bounce them off each other (parents are not entirely oblivious to their children’s intentions) she is able to curl up into their arms when the pain becomes a bit too much. It’s a well-trodden path, bringing home the boyfriend who won’t get their approval, trying to ease the soreness of life by pushing back against her parents and sneaking off to parties. Yet it navigates all the traps of a traditional coming-of-age story, remaining centred on Milla as she charges headfirst through every flood of emotion. She is as gentle as when she played Beth March in Greta Gerwig’s adaptation of LITTLE WOMEN in 2019, yet fully comes into her own playing the lead character in BABYTEETH.

The moments when she pushes a boundary are sneaky and enticing, a small look to the camera breaks the fourth wall as the audience – and the audience alone – is invited into her scheming. The film is incredibly dynamic and well-paced, using the familiar technique of the dancing/party scene as one of the first times we see her truly let go and embrace the deep-rooted emotions inside her. Moses is equally as complicated, their chance encounter first suggesting he is careless, and drug habits have left him desperate for money. As time goes on, we also see more sentimental and difficult parts to him, as he becomes more attached to Milla’s infectious energy, but on many occasions trying to steal her medication. Milla entirely captures your attention and love, and it leaves very little sympathy for Moses because of his carelessness for her. Despite how glittery and bright their kindling romance is, it’s crucial to remember that he is a lot older than her and there is a lot of discomfort around that.

BABYTEETH is curious and endearing, despite its harrowing storyline. While we also feel the suffering of the other characters as they watch their daughter and friend in pain, it is Milla who we are constantly drawn to. Her impulsive decision to bring Moses home, and make him a part of her world is a direct decision to reclaim the power and narrative of her life back from the clutches of her illness. The story loses momentum at times, with much gentler pacing than other dramas of this genre, but retains the audience’s attention, walking every step of the way with Milla.