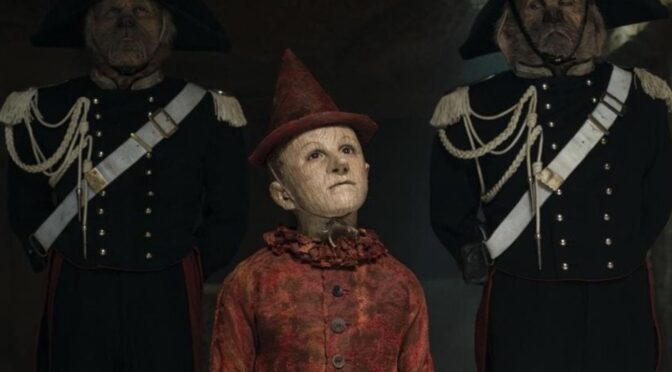 Matteo Garrone’s PINOCCHIO serves as the slightly odd advanced messenger of a coming slew of new versions of the tale of the wooden boy, with two at least seemingly on the development slate in Hollywood. It is hard to believe, however, that any will contain the same feel and fondness for the source language as this version.

The film opens with Geppetto (Roberto Benigni, revisiting the story after playing Pinocchio himself in his self-directed 2002 feature) trying to convince an innkeeper of various defects in the inn’s furniture, tricksily angling for work. Defeated, but charitably fed by the innkeeper, he later acquires a beautiful piece of wood from the local carpenter, who is all too eager to give the log away after it inexplicably moves and shakes by itself. Geppetto carves the famous wooden boy from the piece, joyfully exclaiming his son has been born when the puppet he has carved – Pinocchio (Federico Ielapi) – comes to life. The young boy is led astray, however, and an odyssey plays out – based on Carlo Collodi’s 19th-century novel – with him attempting to return to his father, and his father, in turn, searching for him far and wide.

The story of Pinocchio is a familiar cultural touchstone for Western audiences, primarily as a result of the 1940 animated Disney feature. Since then, the image of Pinocchio’s nose growing as he lies has been indelibly etched into our collective understanding to the point there is an emoji available in the 21st Century based on the idea. However, Garrone’s version stands apart from versions more familiar to audiences. PINOCCHIO is a slightly darker and dirtier presentation of the story, albeit it retains a playfulness and humour that keeps it charming and engaging. Benigni’s opening scenes as Geppetto set the tone wonderfully in this regard, with his fast-talking Italian raising more than a few smiles straight away.

The production design and art direction of the film is a careful balance that is both beautiful in setting and intentionally grimy in trim and details. The colours are not bright and cheerful; indeed, it seems deliberate that the deep red of Pinocchio’s outfit stands apart from the blue-green interiors and dusty brown and yellow exteriors he finds himself in. Anthropomorphic creatures here come with a hint of the grotesque that wouldn’t be out of place on a Terry Gilliam set: scavenging animals appear dishevelled and snort as they eat; snails leave slimy trails behind them; advice-proferring crickets are squat, wrinkled and inelegant in movement (and certainly don’t seem to wear tailored waistcoats). The fates that befall Pinocchio are similar to those in the most famous cinematic version (bar one far more harrowing one present in the book), but they are more horrific in the presentation. There is a hard-bitten edge to this particular fairy tale more in keeping with a Brothers Grimm tone and style than the Disney version of Collodi’s story and the many Grimm adaptations upon which the company built its legacy.

In a further reach towards the source material, there is a reverence for Pinocchio’s Italian – and, in particular, Tuscan – roots. The appearance of the towns and landscapes most clearly evokes Collodi’s Tuscan homeland, and there is attention to detail in the dialogue down to the way characters pronounce words with Tuscan accent inflexions. Pinocchio implores his friends – amici in Italian – with the pronunciation ‘ah-meesh-ee’ rather than the more textbook ‘ah-meech-ee’. The film is due to be released in both Italian and dubbed English, and the latter may obfuscate some of these charming small details. If anything, the film probably looks cram in too much and starts to feel slightly rambling by the time boy and father are reunited.

PINOCCHIO stands apart from previous adaptations, and most definitely from versions of the story familiar to English-language audiences. Although that could be jarring, in doing so, it has an authentic fascino that is unlikely to be bettered by a Hollywood-led live-action version.