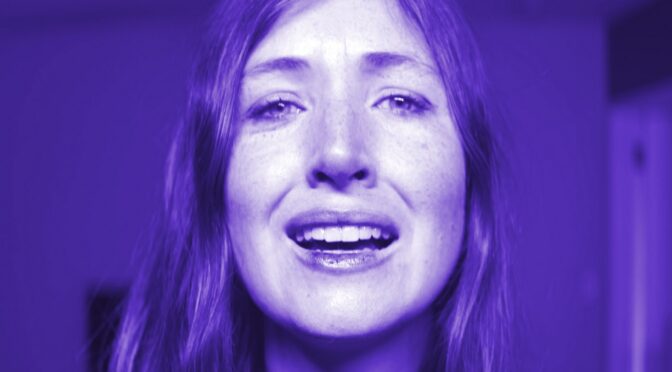 Amy will die tomorrow – whether or not this is true, she is certain of it. Grappling with this belief, Amy (Kate Lyn Sheil) begins drinking again despite being a recovered alcoholic, blasts classical music, and meanders around her home in a stunned daze. Her friend Jane (Jane Adams) arrives at this strange scene, that resembles an emotional breakdown, and thinks she’s witnessing a relapse. When Amy tells Jane what she knows, Jane cannot fathom why her friend thinks this. But when Jane gets home something strange happens: Jane believes that she will die tomorrow too.

In writer/director Amy Seimetz‘s SHE DIES TOMORROW the fear of impending death is both tangible and highly contagious, conjuring an arty horror by way of intimate psychodrama. The monster is an incorporeal human terror: the knowledge of one’s own mortality. It turns out that nothing external can be as anxiety-inducing and debilitating as the very real thoughts we all experience. Seimetz’s prescient mood-piece is a barefaced acknowledgement of a break with a sense of reality which we can’t overcome – in this case an all-consuming apprehension of your own death. Emerging in an ongoing global pandemic, filled with private malaise and dread, SHE DIES TOMORROW is more astute and significant than it could have been at any recent time and feels like an unintentionally prescient comment on the cloying fears many of us now share.

For such a high concept, SHE DIES TOMORROW has notably naturalistic performances and keeps an eerily relatable tone and a grounded, humdrum notion of imminent death. Those who are infected don’t scream in fear, they’re quietly devastated, shuffling around without aim and trying to make some amends and small grasps at meaning in their last hours. Time becomes finite as it starts slipping away. Sensuality is heightened as every taste and touch is to be relished as the last, like a communion with the earthly. Everything that seemed important collapses into banal meaninglessness.

As we follow Amy and Jane traversing their crises, they interact with others who are then shortly infected with the thought of dying tomorrow. When a character is instilled with this fear they look down the camera at the audience, as neon red and blue illuminations flash, reminiscent of Sirkian melodrama lighting that connotes an interior emotional landscape suddenly crumbling into a sea of despair. This surreal flourish being the only visible indicator of horror-styling in an otherwise deadpan realism.

Characters repeatedly listen to the famously epic mass for the dead, Mozart’s Requiem, which seems almost too grandiose and lavish a soundtrack for the quiet despair taking place. Some try to plan how they will live on after death (Amy, for instance, plans to turn herself into a leather jacket). Others seek closure for the things they should have done sooner. The cast seems to develop a serene detachment and acceptance of the inevitable. SHE DIES TOMORROW traverses the logical grooves and endpoints of its concept with such confidence and credulity that it’s easy to forget to question whether any of these characters really are going to die tomorrow. Answers are not given easily though; this is cinema giving full attention to the hard questions.

To underline its existentialist influences, in one scene Jane interrupts asinine small talk about dolphins with a non-sequitur Camus quote, “humans are the only animals that pretend to be what they’re not.” We know we will die yet pretend we will not. In SHE DIES TOMORROW everyone has dropped this veil completely, they’re no longer ‘currently-living’ and are instead confronted with the idea they’re merely ‘not-yet-dead’. Eventually, this thought-infection reaches beyond the screen and touches the audience itself. It is very difficult to not acknowledge one’s own mortality or entertain notions of your own death after this impressively understated feature that wallows and lingers in its own detached chilly dread, like an unwelcome thought creeping into your head at four in the morning.

“What would you do if this was your last day?”- it turns out the answer, worryingly, is that there’s not much you can do.