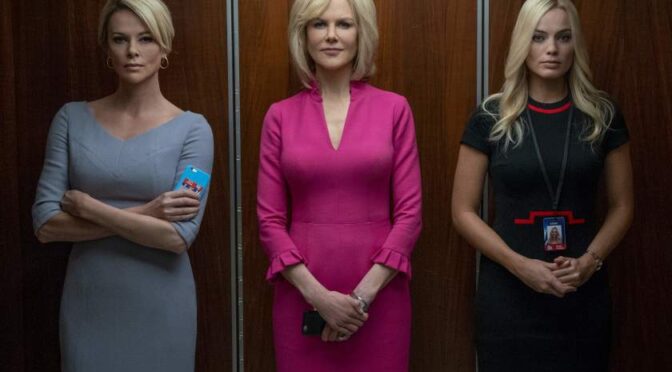 2019 was an excellent year for cinema, but it was also a year dominated by men, with LITTLE WOMEN the only female-led film nominated for this year’s Academy Award for Best Picture. It’s refreshing, therefore, to watch a film like BOMBSHELL, which puts women centre-stage.

BOMBSHELL isn’t perfect, and it has only picked up three Oscar nominations: Charlize Theron for Best Actress in a Leading Role; Margot Robbie for Best Actress in a Supporting Role; and Kazu Hiro, Anne Morgan and Vivian Baker for Best Make-up and Hairstyling. Those nominations are well-deserved: Theron superbly embodies former Fox News anchor Megyn Kelly, whilst Margot Robbie is outstanding as the young, ambitious Kayla Pospisil, a fictional amalgam of several real Fox News staffers.

The cast as a whole is strong, with Jon Lithgow bringing nuance to the creepy, leering CEO of Fox News, Roger Ailes. Saturday Night Live’s Kate McKinnon also puts in an appearance as an undercover lesbian Democrat working in the right-wing viper’s nest that is Fox. Nicole Kidman is less compelling as Gretchen Carlson, but then her character is side-lined after her firing from Fox News. Nonetheless, Carlson is the first woman to speak up against the seemingly untouchable Ailes, who likes to look at women’s legs and get them to prove their ‘loyalty’ to him.

BOMBSHELL has a powerful and timely message at its core – at times uncomfortably so. Casting a shadow over the entire film is Donald Trump, the sexual harasser par excellence and the living embodiment of male entitlement. This spectre is one of the problems with films about such recent events: because the 2016 US Presidential race feels so fresh, it’s hard to take a historical perspective. The bogeyman of the present clouds our understanding of the near past, making it impossible to envision a different future. Any hope encouraged by Roger Ailes’ fate is crushed by the sense that men will ultimately continue to be predatory, they will just not be as obvious about it.

But BOMBSHELL isn’t a film about Donald Trump, Roger Ailes or Rupert Murdoch; or at least, it shouldn’t be. At its heart are the three women whose lives intersect throughout the film. At first, it’s hard to empathise with these women, at least as a ‘liberal’ viewer, as most of the film’s audience presumably are; after all, a movie which is so critical of Trump and Fox News is unlikely to appeal to most Republican voters.

“I’m not a feminist,” Megyn Kelly insists – depressing words to hear from anyone, but especially a woman. Yet throughout the film, we grow to like these women, who are portrayed not as perfect idols, but as real, flawed, vulnerable people. Margot Robbie especially succeeds in winning us over, perhaps helped by the fact that any one person’s real-life biography doesn’t constrain her.

The director of BOMBSHELL is, perhaps surprisingly, a man: Jay Roach, otherwise known as the director of the AUSTIN POWERS movies. It is written by a man (Charles Randolph), too, whilst the music is by Theodore Shapiro, the cinematography by Barry Ackroyd and the editing by Jon Poll. Does any of this matter? Arguably it shouldn’t, yet it’s interesting to bear in mind, given a few of the film’s questionable choices.

For instance, we are shown, in almost lurid detail, how Roger Ailes forces Margot Robbie’s character to lift her skirt as far as her knickers. It’s an intentionally shocking scene, but it suffers from a trait present throughout BOMBSHELL: a lack of focus. In this scene, Roach tries to have it both ways, by showing us both the violation experienced by Kayla and the sexual excitement evident on Ailes’ face. As a result, it’s unclear whether the scene is supposed to make us feel sorry or angry for Kayla, or disgusted or furious at Ailes. Its dual focus dilutes the intensity of the scene. It’s disturbing to see Kayla through Ailes’ eyes – objectified by his gaze, which is also the gaze of the camera and the viewer. Why eroticise a moment which is not about sex at all, but rather power politics? Roach wisely eschews showing us any further instances of Ailes’ depravity; instead, we only hear through Margot Robbie’s character an account of what he made her do, which is far more powerful than showing it to us.

Under Ailes, the motto of Fox News was ‘fair and balanced’. Is the same true of BOMBSHELL? Of course, the film rightly takes the side of Ailes’ victims, but it is also balanced in so far as it depicts Ailes not simply as a caricature of evil, but rather a frail old man, worthy of our pity as well as our disgust. This angle feels like another misstep, however. A possibly empowering ending is muddied by an extended cinematic depiction of Ailes’ downfall. There is enough material in there for a film of its own, so why distract from the three women central to the story of BOMBSHELL?

It feels at times like the filmmakers struggled to make the source material for BOMBSHELL stretch into a feature-length film. It is already less than two hours long, but the film could easily have been shorter: There are a few unnecessary flashback scenes, whilst a House of Cards-esque breaking of the fourth wall at the beginning goes unused for the remainder of the movie.

BOMBSHELL should be celebrated for shining the spotlight on female survivors of sexual harassment. Although flawed in its execution, it is to be hoped that this film will be one of many in a long line of #MeToo era movies. Perhaps with more time and distance, the themes and characters of BOMBSHELL can be revisited.