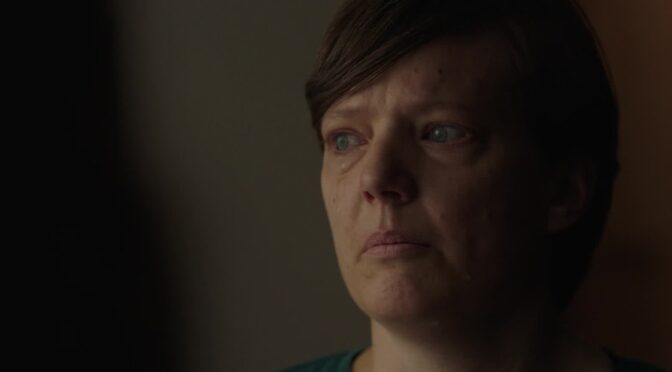 ALIVE tells the story of Viktoria, a lonely woman who decides to make a Tinder profile, and one of her carers, Ida, who’s conflicted between her protective instinct and her respect for Viktoria’s independence and autonomy. The character-driven drama looks at society’s tendency to infantilise or “other” people with disabilities, and to shame women for embracing their sexuality. It also examines the complexity of the relationship between a cared-for person and their carer – and the widely recognisable themes of loneliness and isolation. Intimate scenes between Ida and her boyfriend are juxtaposed in montage against equally intimate, but clinical scenes of Viktoria’s male carer lifting and attending to her. Illness or injury have clearly damaged the brain of a woman who once enjoyed an active and joyful life; Olsson frames and directs the character of Viktoria in a way which empowers her and conveys her charisma and humour with a realist subtlety and restraint.

Swedish director Jimmy Olsson told us: “The story came about when I heard an American podcast story and I felt that there could be a good drama there. The carer had to wait outside, while his client was waiting for this anonymous sex date… I thought, “whose fault is it if something bad happens?” And then it quickly developed into something more – I thought about how we see disabled people, how we as abled people are prejudiced against them, we know what is best for them. Like it’s an ego thing. I also thought since a lot of disabled people look different from abled people, we treat them as though they dont have feelings like the rest of us… those things inspired me to tell this story.”

“I knew Madeleine Martin (Ida) before and I have wanted to work with her for a few years, but didnt have the right project for her. but as soon as I did, it was a no brainer. She is so natural in her acting and she has got this special gaze and presence, so she was the only one I thought of when I started casting. Also she was helping out a lot when we started to work with the script a couple of weeks before the shoot. She wants to try to work behind the camera as well, so she has got a lot of ideas.”

“Eva Johansson (Viktoria), I had seen in a short a couple of years ago. Madeleine knew of her from before, and suggested her to me. I brought her in to do an audition and she was experimenting with the text, and tried out some different stuff, and I went with my gut on her. I had a feeling that she was going to go all in and she did. She did a lot of research for her character. She has mostly done theatre earlier, but she should do more film because she is such a great character actor!”

ALIVE premiered at the Gothenburg International Film Festival last month, and the short will continue running the festival circuit this year. You can view Olsson’s other work, including a trailer for his mockumentary WHATEVER HAPPENED TO MS LONGSTOCKING?”, here.