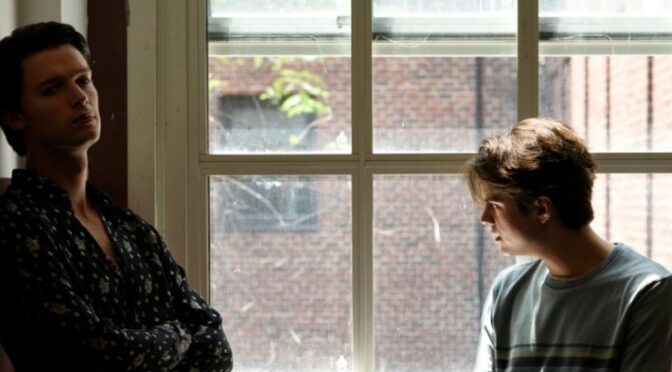 “What happened to the mirror?” “I didn’t like what I saw.”

Based on a paperback page-turner called In This Way I Was Saved and heavily influenced by Ingmar Bergman’s PERSONA, DANIEL ISN’T REAL is the story of Luke, a college freshman whose imaginary childhood friend Daniel makes a comeback, as he begins to face the horrors of adulthood while still dealing with old wounds. It’s an accessible and attractive story, but the film’s true strength lies in the subjective experience it offers.

Anxious to avoid making a “boring movie”, director/co-writer Adam Egypt Mortimer developed a 40-page design document for a team of technicians and designers which included cinematographer Lyle Vincent (A GIRL WALKS HOME ALONE AT NIGHT; THE BAD BATCH). The film opens with a shooting in a cafe, witnessed by a young and terrified Luke; and the tension doesn’t drop from that moment onward. Mortimer cited REQUIEM FOR A DREAM as an influence when he began working to build a “non-stop anxiety” into every element of the film, from characterisation, editing and direction to painstaking sound design. A constant, ominous aural undercurrent roars like a subterranean furnace or subway tunnel, and whenever Luke submits to Daniel’s influence, this thunderous soundscape often abates. This negative aural space is used to breathtaking effect. Visually, the use of mirrors, overlapping faces and symmetry embed the feeling of duality and dissociation. Compositions alternate between flat tableau and vertiginous depth, echoing the thematic juxtaposition of a flat, anaesthetised, quotidian life against the overwhelming cosmic horror of a psychotic episode.

For all its unique personality, there are a few familiar tropes to enjoy in DANIEL ISN’T REAL. Many great horror films make use of the nutter collage, a psychic manifestation of someone’s mania, whether it’s Sam’s smile chart in ADDICTED TO LOVE, Sy’s gallery in ONE HOUR PHOTO or something more expositional such as Annie Wilkes’ “Memory Lane” album in MISERY. Luke’s mentally unwell mother Claire (Mary Stuart Masterson) has an obsession with snipping “secret messages” from books, and pasting them to the wall in screeds and swirls. It’s used as a mostly visual conceit, offsetting and disordering the straight lines of the house’s interior to hint at mental descent. And no film about demonic possession is complete without a trip to the library, but when Luke and his new friend Cassie browse the shelves they’re not looking for the usual woodcuts: they read quotes from John Berger and Maurice Sendak to one another, while gooseberry Daniel, furious at feeling excluded, screams extracts from the book of Exodus.

Alongside its sense of fun and humour, DANIEL ISN’T REAL has a maturity and integrity which brings it a step ahead of the rest. Take for instance its treatment of women and villains: in the horror genre they are often disadvantaged by careless character development. Their identity is usually based on trauma; their purpose is usually to seduce and to die. The women and villain in DANIEL ISN’T REAL are different: they have a rich inner life, which is conveyed by nuanced performances as well as narrative cues. Claire isn’t othered into madwoman status, and isn’t fridged – she’s touchingly real, warm and humorous. Her suffering is something which is happening to her, and not just to her son. All three central female characters have an agency of their own, and when they’re in caught up in Luke and Daniel’s nightmare, the threat to them isn’t sexually exploitative; they are confronted with the same psychic and physical battles as Luke himself.

The villain of the piece is given equally careful attention. In his adult form, Daniel has the physical presence of Michael Myers crossed with Tyler Durden, but there is more to him than a “bad self”. In the first scene which provokes us to question whether Daniel may indeed be real, it’s a subtle but powerful flash of vulnerability and fear rippling across his face which betrays him as a potentially independent entity. He has the traditional trappings of a baddy: guyliner, sleazy seventies suits, a petulant school-bully sense of humour – but he wears those trappings as a mask of confidence, and something much more complex is clearly lurking beneath.

The casting choices didn’t begin as part of the creative process, but in the case of the two leads, they certainly informed it after the fact. A film which owes a lot to JACOB’S LADDER may not have drawn in Tim Robbins’ son by design, but draw him in it did; and Patrick Schwarzenegger’s resemblance to his dad is as inescapable as the Terminator himself. The visual parallel works for the story: Daniel is a seemingly unstoppable force, a vain and brutal anthropomorphic personification of the id. Offsetting the parental baggage, though, a deeply collaborative directorial approach offered both actors the chance to shape and influence their characters, bringing greater depth to their performances – in particular, Robbins’ touches of dark comedy and Schwarzenegger’s forays into the effete. Daniel isn’t just a monster, he’s more of a demon: often mannered, prissy and self-conscious. As he begins to cement his seduction of Luke with a childish prank, he breaks from his dreadnought looming and literally ROFLs like a child, tittering and twiddling his fingers.

Having flipped open his own Pandora’s Box, Luke approaches another college student, Sophie, at a party and compares her to Louise Brooks. Sophie acknowledges her resemblance to Pandora, remarking that the character’s “raw sexuality brings ruin to herself and everyone who loves her”. Daniel later uses Luke’s body to rut with Sophie in the steam tunnels under the campus, as Luke’s phantom self watches from the shadows. It’s a scene of sexual violence, but against the possessed boy rather than Sophie. There’s a deliberate contrast between this scene and Luke’s earlier lovemaking scene with Cassie, from whom he repeatedly and clearly gains consent. And here he’s forced to simultaneously watch and experience his own physical violation, screaming “I want my body back!” as Sophie calmly immortalises the moment with a snap on her iPhone: “You look good in that picture”.

Daniel’s love of the artwork of Bosch, in particular The Garden of Earthly Delights, begins to manifest in Luke’s waking nightmares, which are populated by demons with prophylactic rubber cauls and Screaming Pope crowns. The body horror ramps up when Daniel’s final physical and spiritual violation of his host begins, during a therapy/exorcism session with Dr Braun (Chukwudi Iwuji). Luke is subjected by Daniel to a Cronenberg-esque mouthrape, during which Iwuji transcends the character of Dr Braun from disappointing “magical negro” to a deeply visceral avatar of fear and disgust.

Early drafts of the script had an emphatically nihilistic theme, but this gradually developed into a treatment of empathy in the face of horror. Empathy for mental illness as depicted in this story begins with a quite naturalistic portrayal, which quickly develops into literal representations of a man “fighting with his demons”. Is this the right way to do it? Should Daniel be real or not? And what does “real” mean, anyway? No matter whether you feel the story takes the best turns, it’s difficult not to enjoy the ride, and to appreciate Mortimer’s artistic maxim, taken from activist Cesar A. Cruz: “Art should comfort the disturbed and disturb the comfortable”.