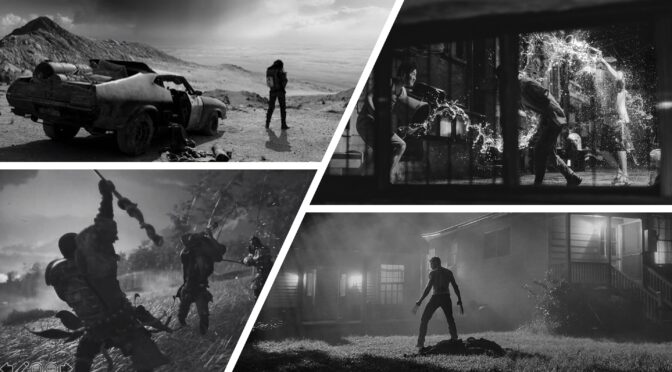 PARASITE is re-released in the UK on 24th July 2020 in a black and white version. It’s the latest in a trend of prestige black and white re-releases of recent films originally released in colour joining MAD MAX: FURY ROAD (BLACK & CHROME EDITION) in 2016 and LOGAN: NOIR in 2017 which both followed their colour releases by a year.

Bong Joon-ho’s Oscar-winning film remains incredible in black and white: “cinematically divine” as Elle Haywood called it in her review for TAKE ONE. The black and white colour palette adds a starkness which highlights the difference between the dark and dingy greys of the Kim family’s apartment and the light brightness of the wealthy Park family’s house. The Parks are rendered in shining white, forming a further contrast with the dark shadows of their basement. This black and white imagery emphasises what Elle called the “stark and haunting” depiction of wealth disparity at the heart of the film. Still, it ironically loses some of the moral greyness that makes PARASITE so compelling.

As with LOGAN and MAD MAX: FURY ROAD before it, things are both gained and lost in the transition to black and white. James Mangold, director of LOGAN, referred to black and white re-releases as “acoustic cover versions”: stripped-down versions emphasising the basics of cinematography and composition. These re-releases lend their films a certain prestige – an arthouse quality – that seems suited to these films in particular: films that transcended their genre blockbuster classifications or, in PARASITE’s case, its classification as ‘foreign language film’. PARASITE’s black and white version does invite comparisons to Ingmar Bergman that aren’t apparent in the colour version. In black and white, the Park’s house seems more like the cottage by the sea in PERSONA, and this comparison brings out the claustrophobia and paranoia of PARASITE’s second act. Cineaste nostalgia and the cultural history of black and white cinema lend these versions an immediate conceptual link to classic cinema of the past which serves as a shortcut to the canonisation of these films.

“Cineaste nostalgia and the cultural history of black and white cinema lend these versions an immediate conceptual link to classic cinema of the past which serves as a shortcut to the canonisation of these films.”

In a recent Gizmodo article, Tom Beasley ties black and white re-releases to the cultural and economic context of fandom whereby the enthusiastic and vociferous fan response to these films, in particular, makes a strong economic case to studios to produce and market new versions. This strong fan demand for alternative versions can be seen in the extended fan campaign for the ‘Snyder cut’ of JUSTICE LEAGUE and HBO’s subsequent spending of an estimated $20 to 30 million dollars on ZACK SNYDER’S JUSTICE LEAGUE, scheduled for release in 2021. When director’s cuts do not exist, shifting a film’s colour palette is an effective way to satisfy fans and to encourage audiences back to cinemas (or video-on-demand platforms). The move also creates a new prestige version with the added connotations of nostalgia and cinema history.

Given the popularity of black and white re-releases and the apparent benefits for studios, it’s instructive to look at how another medium is using technology for on-the-fly digital recolouring. Photo modes are a recent trend in mainstream video games appearing in games ranging from open-world adventure games like Horizon Zero Dawn and Marvel’s Spider-Man to tentpole platforming titles like Super Mario Odyssey. These modes allow the player to pause the game and move around the game environment as a photographer to capture photos of the often-beautifully rendered digital environments and to share them on social media. Photo modes let the player apply filters to add effects as with Instagram filters or to dynamically change the colour palette for better shots.

The logical endpoint of this dynamic rendering of new colour palettes is seen in the recently released game, Ghost of Tshushima, which allows the player to change the game’s whole colour palette while actively moving through the game’s world. Ghost of Tshushima is a samurai action-adventure game strongly influenced by the films of Akira Kurosawa. So much so that the game has a ‘Kurosawa Mode’ which, when enabled, transforms the game’s colour to black and white, adds a weathered film visual effect, switches the game’s language to subtitled Japanese, and compresses the sound to resemble that of a Kurosawa film. The colour palette of the entire game is digitally swapped in a way specifically designed to play off the prestige and nostalgia of Kurosawa’s films.

“The colour palette of [Ghost of Tsushima] is digitally swapped in a way specifically designed to play off the prestige and nostalgia of Kurosawa’s films.”

With the technology available for digitally rendering new colour palettes in games, it would be surprising if it weren’t something that studios were considering for films. Imagine being able to switch colour palettes while watching a film as easily as switching to different audio or subtitle tracks on a DVD. You could decide to watch BACK TO THE FUTURE PART III in a sepia tone evocative of the older Westerns that the film is emulating, or perhaps switch a visually noisy blockbuster to a more colour-blind friendly palette to make it more accessible.

There are some significant technical and cultural differences between cinema and video games. The black and white cuts of PARASITE, LOGAN, and MAD MAX: FURY ROAD are curated cuts with significant amounts of work going into colour grading to ensure that the visual effect is maximised and that composition of shots is not compromised. In the case of MAD MAX: FURY ROAD, director George Miller always intended for the film to be released in black and white and spent a lot of time working with colourist Eric Whipp to ensure that the digital colouring of the black and white version preserved his intent. This level of curation and care is different from the dynamic digital recolouring of Ghost of Tshushima where the software is merely rendering the environment differently.

“Cuts of a film also have a particular cultural sanctity that modes of a video game do not.”

Cuts of a film also have a particular cultural sanctity that modes of a video game do not. PARASITE’s black and white edition is an alternate cut that has been authored by the director analogous to a director’s cut. A black and white re-release has an authority that switching to a different colour track like in a video game would not have. Even if the technology were released tomorrow to allow a digitally rendered sepia palette for PARASITE, watching that would not be the same as watching the black and white cut which was overseen and authored by Bong Joon-ho.

It’s interesting to speculate on the future of digital recolouring for films but as well as the cultural issues, there doesn’t seem to be an economic incentive for studios to allow digital recolouring of their films on-the-fly. As the popularity of black and white re-releases shows, fans are willing to go and see lovingly crafted alternate versions of recent films and to focus on the new appreciation that these acoustic covers of films bring.