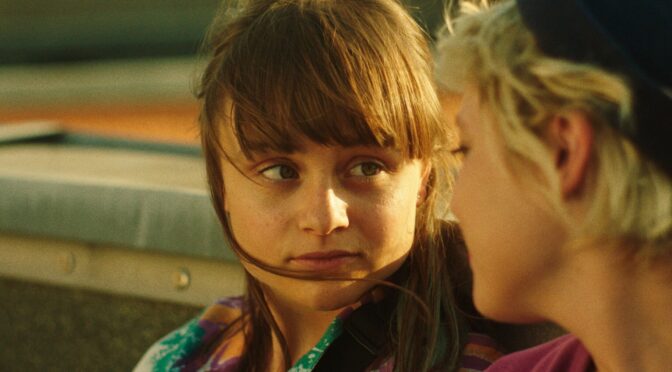 Director Leonie Krippendorff puts her own spin on the coming-of-age subgenre with this frank and insightful film set during a summer in Berlin. Nora (Lena Urzendowsky) at 14 years old, is walking the line between childhood and young adulthood as she begins to discover where she fits in the world.

Her older sister Jule (Anna Lena Klenke) and her friends are slaves to social status and acquiring more Instagram followers. Nora tries but struggles to fit in, constantly shadowed by Jule. However, things change after she meets a charming new student, Romy (Jella Haase) and she finally finds a sense of place and community while her relationship with Romy progresses.

Krippendorff focuses on the milestones that will shape Nora into the person she will eventually become. Her first period – a particular part of the plot – is played out effectually by Krippendorff for much longer than we’ve seen in similar films. Nora’s first love comes across as a little superficial at times, lacking the substance and passion we’d expect, but makes sense in this context and captures not only the intensity but also the capriciousness that often comes with adolescence.

With an alcohol-dependent mother, both sisters, Jule specifically, are the result of having been forced to grow up prematurely. Nora, as the youngest, is at a tipping point in the film where the decisions she makes now will affect the rest of her life. COCOON, as the title and butterfly imagery in the film suggests, is about evolution, change and new beginnings. Nora, almost mirroring the progression of the caterpillars she keeps (something that Jule also participated in during her childhood), undoubtedly changes throughout the course of the narrative: from shy and uncomfortable to secure and happy in the new community in which she feels accepted.

Whether COCOON can distinguish itself from other films of the same ilk is a different matter. Whilst it is not doing anything that hasn’t been done before, it brandishes a clear message; don’t hide your true self, celebrate who you are. We all know life isn’t as clean-cut as that but like the film preaches, we can accept it as it is: as something hopeful and joyous that may not delve into substantial detail regarding the difficulties of Nora’s evidently complicated childhood, but still offers audiences a well-intentioned and positive message.

The film is not just about Nora’s journey and discovery as a queer teenager but is also a comment on the external factors that influence her. Often families and communities need to be sought out away from our biological offerings to help us develop a true sense of self, and the narrative is left somewhat open-ended because – in reality – change is a constant and ever-present aspect of life.

The positivity of COCOON outweighs its downfalls. Krippendorff has produced a sensitive and optimistic coming-of-age tale that welcomes everyone.