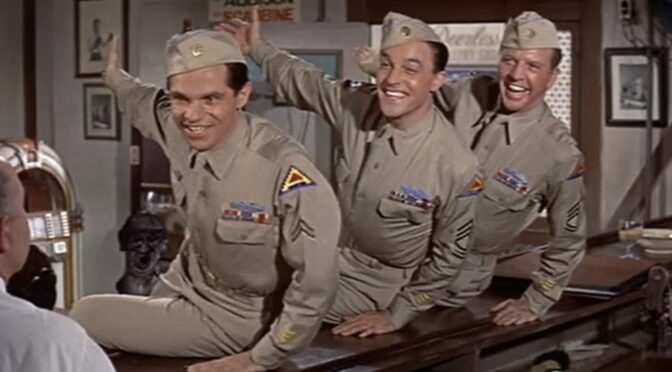 IT’S ALWAYS FAIR WEATHER, the last of the Stanley Donen-Gene Kelly collaborations, is a transgressive film. Transgressive in genre terms, because, unlike so many American movie musicals between the 1930s and 1960s, the film has the temerity to admit something we all know to be true: namely, that life can be a bit shit.

It’s V.E. day, and three G.I.’s have landed in New York to become citizens again: Ted Riley (Gene Kelly) is bound for law-school and a political career; Doug Hallerton (Dan Dailey) is set to become a great artist; Angie Valentine (Michael Kidd) is to open up his own gourmet restaurant. Their respective futures look rosy, and they know they’re going to be the best of pals. Only their bartender isn’t so sure: so they bet a dollar each that they’ll all meet back there in a decade. Bartenders are wise. The trio goes their separate ways: Angie opens a burger joint, is happily married and has five children; Doug becomes a successful advertising executive in an unsuccessful marriage; Riley wastes the years, loafing and womanising, a natural dissembler who ends up managing a boxer only to go along with match-fixes. But they all end up in the same bar those ten years later, and each finds their old pal loathsome.

But noise of their being reunited reaches the ears of Jackie Leighton (Cyd Charisse). Ted immediately takes to flirting with her, a programme manager on a hacky soirée-style television show, full of ad-jingles and faux-sincere “human interest” segments. Those are the host’s, Madeline Bradville (Dolores Gray), favourite parts of the programme, “because it means something.” Jackie wants to use the boys’ story, unaware that the reunion has only exposed the disappointments of their lives to one another.

It’s an uneasy mix, this: the profound admission that the motivating particulars of someone’s existence — love, friendship, and the pursuit of the life well-lived — can be dashed, or lose out to other, less nourishing, priorities; all tied up with some of the best and most restorative musical numbers Donen and Kelly ever staged. This odd yoking together of parts makes the film uneasy and seemingly unstable; as such, it’s a perfect film to watch repeatedly, because its changeability reflects the mood of its viewer. If that viewer is despondent, then the film’s despondent moments might overpower the happy reprieves; if that viewer needs revivifying, the numbers might do their work. The film is a mood-mirror.

Shot in CinemaScope and Eastmancolor, produced by Arthur Freed, and scored by André Previn, the film has all the defining marks of MGM’s greatest work. But there are catches. For instance, Kidd is a charisma-vacuum, with no main number of his own, and even when he’s included in group dances he’s overshadowed by the other two. This problem also afflicts poor Jules Munshin in ON THE TOWN — to which IT’S ALWAYS FAIR WEATHER was initially conceived as a sequel of sorts — as the third member of the trio almost wholly lacking in the qualities the other players have in abundance. There’s also a feeling of inherent disorganisation in the film’s structure.

Vincente Minnelli’s best musicals, produced by MGM, are often praised for the way that song is integrated into narrative without a seam. No such compliment should be proffered Donen and Kelly’s way, because most scenes in IT’S ALWAYS FAIR WEATHER are itching to burst out with a musical number, sitting around patiently while waiting for them to start. Luckily, in this case, four of those numbers are so perfect that they outshine any limitations apparent in their set-ups.

The first show-stopper belongs to Charisse, who visits the gym at which Ted’s fighter is training. The men stop to chat, that is until Jackie wows them with her encyclopedic recall of championship knockouts. Amazed, the men in their sweats serenade her to the tune of “Baby, You Knock Me Out,” while Jackie, in two-tone green and heels, outclasses them in the accompanying routine. (The high-camp of this is surely Donen and Kelly’s riposte to Jane Russell, in Howard Hawks’s GENTLEMEN PREFER BLONDES, singing “Ain’t There Anyone Here for Love?” to a gym full of barely-clad beefcakes paying her no heed.) In fact, most of the songs (written by Betty Comden and Adolphe Green) reference others, sometimes by the same writers, sometimes in films by the same directors. Doug’s “Situation-wise” number, in which the pent-up and exhausted executive outdoes himself drinking and collapses (see, not cheerful), is in spirit a call-back to SINGIN’ IN THE RAIN’s goofiest number, “Moses Supposes.”

The other two musical highlights are Kelly’s delightful self-actualising ditty, “I Like Myself,” which is a conscious repudiation of the title-song in SINGIN’ IN THE RAIN: the staging of the previous number is pared-down, the only witnesses to it are a couple of confused pedestrians and a dismissive cop with folded arms. Here, Kelly’s gliding up and down the street attracts an avenue of passersby and calls traffic to a halt. The congratulatory aspect of the staging (the crowd applauds when Ted stops dancing) is not the only change from form: Ted is wearing roller-skates throughout the routine, even tap dancing while wearing them (Again, a bit of a copy in itself: SINGIN’ IN THE RAIN castmate Donald O’Connor got to the idea of performing on skates two years earlier in Don Weis’s superb B-musical I LOVE MELVIN.) But it’s so captivating, and what makes the number beyond reproach is Kelly’s disbelieving attitude, smiling to himself as he sings: “Feeling so unlike myself, / Always used to dislike myself. / But now my love has got me riding high! / She likes me, so so do I.”

But Dolores Gray’s number, “Thanks a Lot but No Thanks,” clearly takes the biscuit in IT’S ALWAYS FAIR WEATHER, not just because of Gray’s performance but for how the song marshals the film’s salient ideas around it. Donen and Kelly’s ire towards television in the film is profound, and Madeline’s show is at every turn portrayed as a poisoned chalice. In the number, something of a rejoinder to Marilyn Monroe’s “Diamonds are a Girl’s Best Friend” from Hawks’s film again, the extraordinary cynicism of the lyrics best expresses what Ted finds so objectionable about the situation he and his long-separated buddies are being put through. As the male dancers, suitors in evening dress, advance with favours, Madeline thanks them for their gifts — but no thanks, dispatching them in increasingly elaborate fashion. The irony is in her claim that she can’t be bought while namechecking the brands of the gifts being offered: therefore hawking the products herself.

Against the pervasive dissimulation of television Donen and Kelly’s stagings provide space for the characters to admit their disillusionments, embrace one another as friends, and in Jackie and Ted’s case, be open to each other as lovers. Maybe that’s why the narrative is as clumsy as it is: so it couldn’t easily be rendered as a segment on a pre-packaged, ad-heavy television broadcast. Through this the film broaches one of the central contradictions of the American musical: it’s a materialistic means — with beautiful decors and costumes, stars who have trained for years, full musical arrangements, whole crews working on intricate sequences with expensive equipment, the backing of entire studios and their wares — of conveying idealistic notions: lasting romance, true friendship, incessant happiness, familial harmony and the like. And yet a materialistic satire on materialism is still itself materialistic. The film’s optimistic currents mingle with tributaries of despair: the resulting concoction, novel for the Hollywood musical, changes by degrees each time I see it. There can be no last analysis of IT’S ALWAYS FAIR WEATHER: there’s only the chance to watch it again.