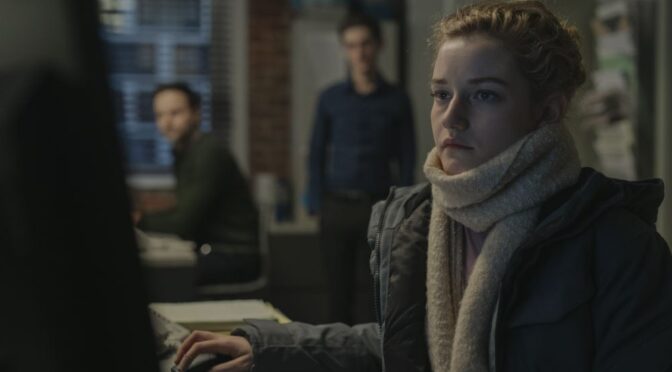 Kitty Green’s THE ASSISTANT is a story told in awkward silences, muffled phone conversations, unexplained innuendo, and uncomfortable framing. The film’s portrayal of workplace sexual misconduct relies on the performance of Julia Garner, but also upon the visual storytelling of its director. These form the core of this compelling and unsettling drama.

Jane (Julia Garner) is an assistant in the office of a powerful executive (pointedly Weinstein-like) at a media or production company. Her tasks vary between the substantive, the menial, and the awkward. While she is in charge of arranging transport for her boss, for example, she is also seemingly responsible for fobbing off his wife about his availability and cleaning suspicious stains from places where suspicious stains should not be. This atmosphere comes to a head when another assistant – notably young and attractive, encountered during a trip to a film festival – is hired despite a total lack of experience, with doors conspicuously closed when in the executive’s office. The tacit and reluctant acceptance of her colleagues only serves to heighten Jane’s discomfort at the situation.

THE ASSISTANT balances two aspects of the issues it raises exceptionally well. There is the need to get across the systemic exploitation powerful men have long wielded in these scenarios. At the same time, it must get across how these can fly low enough under the radar to be perpetuated and even tolerated. The film opts against explicit dramatisations of assault or harassment. Instead, the choices made by Kitty Green – writing, directing, and producing here – serve to illustrate the atmosphere of intimidation, buck-passing, and rationalisation that allows it to happen, alongside the crushing sense of isolation brought about by feeling unable to speak out.

Garner’s Jane is rinsed out via internal telephone more than once by her boss, who we never see. He is the entitled spectre that haunts proceedings. The voice is heard – barely – through a telephone receiver, and we only glimpse snippets of emails. What comes through clearly, however, is the discomfort of Jane. Her panic at losing this “great opportunity” is writ across Garner’s face, and scenes where her co-workers coach her through apology emails effectively illustrate the accepted and everyday nature of the transgressions within the workplace. There are several shots held for excruciatingly long periods that show Jane disappearing down a street or around a corner, highlighting her emotional isolation in an uncaring and impersonal urban landscape.

The centrepiece of the film is similarly understated but involves a visit to the HR department, headed up by Matthew Macfadyen’s Wilcock. The writing of this scene is tremendously paced, laying bare all the expected machinations and explaining away. It is an intelligent approach to such an interaction; rather than ‘exposing’ such a character the film’s script gives him enough rope to hang himself (from the viewer’s perspective, at least). The entire film’s approach is demonstrated in a concentrated form here. There is no resolution. There is no moment of triumph. At the same time, the lack of explicit depictions before this stands in contrast to something like BOMBSHELL, which – while far from considering the broader issues it broaches ‘resolved’ – feels the need to make abuses explicit rather than allegations, as well as deliver cathartic moments for the victims. The reality is often bleaker, more easily explained away with victim-blaming or rationalisations, and pointedly lacking in resolution. Macfadyen makes the most of his brief screen time as an excellent foil to Garner. There is a smarmy charisma to his HR manager that makes his scepticism and faux-concern all the more devastating as we watch the little hope our protagonist has drain away.

THE ASSISTANT is a quiet and introspective film, with an approach that is more powerful and uncomfortable than several films addressing the same topics. As well as defining an interesting route thematically, this requires excellent technical work in the sound design, editing, and other areas beyond Green’s direct responsibility. (Notably, the editor is Blair McClendon, whose work in short film with Charlotte Wells has been superb.)

THE ASSISTANT lingers, and not because it generates an incandescent rage. Instead, it simmers with a sense of quiet injustice and insidious malfeasance, which is communicated subtly and powerfully by Kitty Green, Julia Garner, and the creative team.