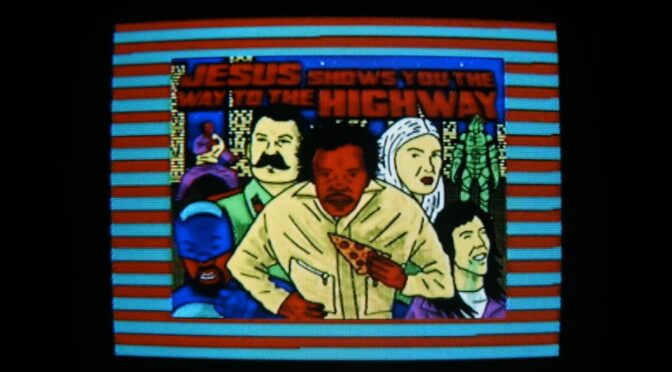 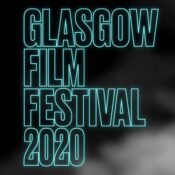 Screening at the Glasgow Film Festival this year after showing at the Fantasia International Film Festival last year, JESUS SHOWS YOU THE WAY TO THE HIGHWAY is a bizarre and psychedelic mix of genres and periods that threatens to overwhelm with its onslaught of surreal elements. It’s like a B-movie co-directed by Panos Cosmatos and Tommy Wiseau and written by an alien trying to interpret the world through video games.

In an alternate 2043, the Cold War never ended, and CIA agents D. T. Gagano (Daniel Tadesse) and Palmer Eldritch (Agustín Mateo) conduct espionage in the virtual reality realm of Psychobook. Gagano is preparing to retire to set up a pizzeria and kickboxing academy with his wife (Gerda-Annette Allikas) when a Soviet computer virus emerges in Psychobook and Agent Gagano needs to enter virtual reality for one last mission.

There is no straightforward plot synopsis that can do justice to how weird the film is. Director Miguel Llansó throws a succession of bizarre and absurd imagery at the audience so rapidly that the only response is to let go and take it all in. There are computer viruses disguised as Joseph Stalin and George H. W. Bush; a dwarf obsessed with pizza; a trio of kung-fu masters named after types of pasta; the president (Solomon Tashe) of a virtual reality Ethiopia dressed as Adam West’s Batman; a base-jumping drag queen; an ‘80s metalhead (Guillermo Llansó) in a fly costume who may or may not be Jesus Christ; and, on top of everything else, the Ark of the Covenant.

JESUS SHOWS YOU THE WAY TO THE HIGHWAY is a film unmoored in time. It is Cold War-inspired retro Afrofuturist science-fiction which combines the ’90s internet aesthetics of HACKERS with ‘70s spy-movie aesthetics, ’60s kung-fu movies, and chiptunes music and video game sound effects from the ‘80s. Llansó’s blending of periods and aesthetics is as a postmodern mélange of different elements and different genres that feels like how an alien intelligence would describe the late 20th century has seen only one film from each decade since the 1960s.

The film’s representation of video games and being in a video game world are fascinating and unlike others in cinema. From its title sequence, the film fully embraces video game aesthetics with a title screen and character select screen ripped from 8-bit video games. When Agents Gagano and Eldritch enter virtual reality, they are represented in the VR game world moving in stuttery stop-motion and wearing flimsy paper masks of Robert Redford and Richard Pryor. The characters judder along as if they’re playing with a low framerate while their cheap masks represent their avatars in the game world. They interact with the video game’s user interface through a little holographic man in a tuxedo. This stark visible difference between ‘reality’ and virtual reality is an interesting way to represent the phenomenological sense of being immersed in a video game; being immersed in a different reality. It’s strikingly different from realist representations in other films where video game selves are represented cosmetically with costume changes (as in TRON) or actor changes (as in the new JUMANJI films).

Like a half-remembered video game that you played as a kid that now you come to describe to someone as an adult, this film sounds utterly improbable. The film’s combination of bizarre elements starts to seem disjointed as more and more are thrown in, and the ending feels perfunctory compared to the imagination of the preceding scenes. But it is never boring: its surreal invention makes it a unique experience to the end and the film’s more bizarre scenes are incredibly funny. JESUS SHOWS YOU THE WAY TO THE HIGHWAY seems destined – and even designed – for cult movie status at midnight screenings.