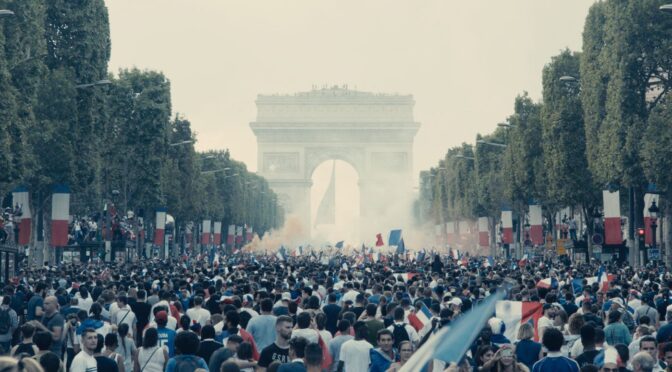 The opening scenes of Ladj Ly’s LES MISÉRABLES use sport – often touted as the great unifier of a country – to highlight the complex divisions and interlocking cultures that the drama goes on to explore during its running time. During celebrations in the streets of Paris of France’s 2018 World Cup win, a brief shot of a man draped in an Algerian flag deftly highlights – as an intense score kicks in – the varied and intersecting identities in modern France his characters must navigate.

The film follows several figures in Montfermeil in Paris: a rough district which Stéphane (Damien Bonnard) begins policing with new colleagues as the film opens. An uneasy balance of power both within his unit and between them and the community; one divided primarily along racial and religious lines. The establishing scenes set the simmering tone that will later come to a rolling boil as the film reaches its crescendo.

The opening half-hour of the film establishes this uneasy equilibrium between the police, the predominantly black neighbourhood leaders, and their Muslim Brotherhood neighbours. However, when Issa – a young boy from the community – steals a lion cub from a travelling circus, this metastability is disrupted. In trying to rectify it, an incident of police brutality – inadvertently filmed by drone – destabilises it completely.

Stéphane’s discomfort with the rough and posturing tactics adopted by his colleagues is evident, and his slightly naive attempts to impose himself without overstepping have a clear TRAINING DAY feel to them. Yet, the greater emphasis on the authorities’ racially-driven over-zealousness recalls the deep discomfort of DETROIT. CITY OF GOD also comes to mind with the film’s depiction of the banlieue. Still, there is no gilding of the particular cage these characters seem to find themselves in. The intersecting identities of some characters – and their families – present the complexity inherent in this situation, even if the fancifully quick plot escalation means the script perhaps doesn’t explore them as thoroughly as a quieter character piece might do.

There is a rough and vérité style to Ly’s shotmaking, but the camerawork is perfectly capable of being graceful. Shots from the young Buzz’s drone deliver a sweeping view of Montfermeil that gives the impression of it being an unruly kingdom of sorts, competing factions and all. The numerous foot chases are wonderfully captured, with the camera frequently gliding alongside its subjects – the music once again rising – rather than more pedestrian cuts around corners and obstacles. The dynamism of the camera increases the escalating sense of panic as the film accelerates to its end, and the editing skillfully conveys the impression of different strands multiplying to violent and chaotic effect.

The final shots of the film – and the explicit reference to Victor Hugo’s novel from which the title derives – have no easy conclusions for viewers. Various facets of the issues the film highlights – which go well beyond France – are shown to be unsustainable, chiefly the dysfunctional state of the principle of policing by consent (the consent of whom?), but while a critical standpoint is clear and present, moral and ethical certainties are not.

It’s a strange curiosity of 2020 that the coronavirus-delayed release in the UK of LES MISÉRABLES – taking some inspiration from an 1862 novel – should nearly coincide with a re-release of 1995’s LA HAINE, another unflinching portrait of banlieue life which is a quarter-century older. Plus ça change, plus c’est la même chose.