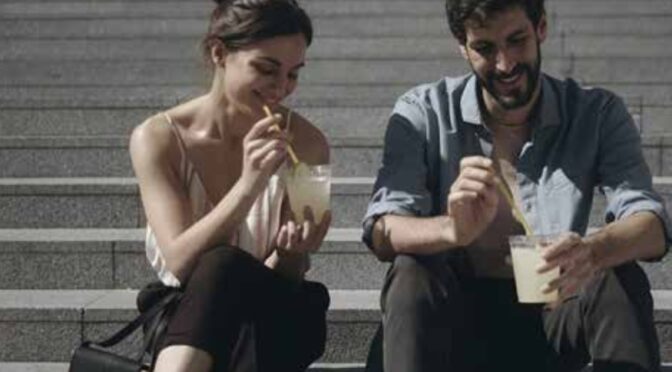 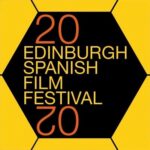 When it comes to films like this, BEFORE SUNSET is the benchmark. Here – ONCE AGAIN (UNA VEZ MÁS) – we have ex-lovers, brought back together when Abril returns to Seville for her grandma’s funeral. For one day and evening, she and Daniel walk around town. They reminisce, there’s some electricity, and hanging over them is the shadow of the rest of their lives.

BEFORE SUNSET this ain’t, but that’s okay; not every painting can be the Sistine Chapel. It’s also far more musical, with full-length songs – some diegetic, some not – soundtracking passages of time or moments of contemplation as these characters spend time as tourists in their own nostalgia. It’s not a musical per se, but music is punctuation in ONCE AGAIN. It wouldn’t be unreasonable to compare it to an album since these songs bookend big-idea conversations, and each song’s rumination on love applies to Abril and Daniel as they re-evaluate and daydream in-the-now.

First-time fiction screenwriter and director Guillermo Rojas isn’t afraid to let scenes take as long as they need. A conversation about travel touches on how the pair are ageing: either they have lost their spontaneity, or their backs aren’t cut out for camping like when they were younger. It’s a single-shot scene lasting around three minutes, but Rojas times it just right, revealing the characters’ shared history, their could’ves and should’ves, and how there’s no telling whether timing is on their side. He does it again in a more climactic and intimate moment, keeping the camera on them for over ten minutes without a cut. You’re there for every breath.

Scenes like these emphasise the individual moments Abril and Daniel share because the pauses and hesitations tell you as much about them now as the times they shared as lovers years ago. There’s no doubting their connection, and trips down memory lane sell you on their credentials as a couple, but ONCE AGAIN is about this particular encounter. Those long shots reveal their chemistry, enough to quietly root for them, but also enough to sense the doubt and Abril’s looming return to London.

It’s a film engaging with the past, present, and future at once. The time since the two last saw each other has been filled with Facebook stalking and almost-surprise visits. They wonder if they’ll ever holiday together again, planning a trip that sounds like the next day of the rest of their lives. But the moment they’re in is melancholic and unfair; you feel that one of them really means it, while the other thinks it would be nice, but… The philosophy of a line like “if you were to go back and relive a memory, it’d never be as good as you remember it” is probably true, but here it stings.

For early 30-somethings, the film might just be a comfort. With her supposed dream job working by the Thames, Abril still feels like she isn’t quite where she wants to be. Her dreams are more grounded than when she was younger too. It’s like watching someone in that transitional period between youthful dreaming and mature contentedness, without the horror of seeing it as throwing in the towel. It’s balanced by the love Abril still feels in her relationships, as if she’s chosen to focus more on what’s important – people in her life – as she grows out of her 20s. She isn’t just trying to figure out what Daniel represents in her life, but where she wants her energy to be spent generally in what seems to be a pivotal coming-of-age moment.

None of this would matter if it weren’t for Silvia Acosta and Jacinto Bobo making Abril and Daniel people to believe in. Across the day we spend with them, their lives are fully fleshed out, from their dating history to how Abril’s absence has been felt. Acosta’s smile is constantly disarming, and when Bobo’s Daniel sings for her, you feel he wouldn’t sing on demand for anybody else. There’s no BEFORE SUNRISE to set the scene, so the film’s success is down to Acosta and Bobo painting the past while indulging the present.

If you’re someone who spends more time than you should wondering ‘what if?’ then ONCE AGAIN is an almost two-hour provocation to send a text or pick up the phone. It’s a film for dreamers who believe everything will fall into place, and who have heard their hearts broken because falling into place at the right time takes more than dreaming. But it’s also a film that never undermines the significance of what something meant, and that in itself is an intelligent comfort, putting ONCE AGAIN somewhere between heart-shattering and heart-warming.