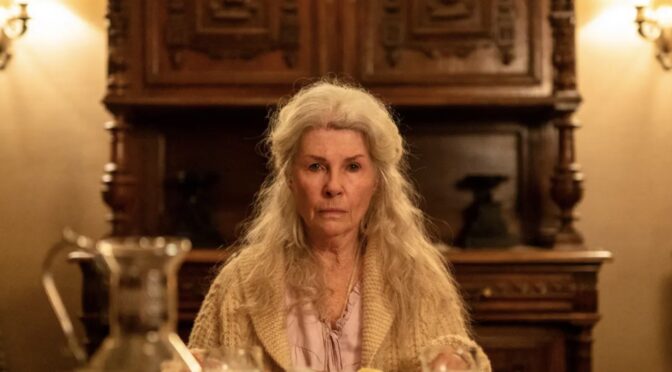 Ageing and decay fill Natalie Erika James’ debut feature film, RELIC. Damp seeps in from the edges of things. Mould horrifically consumes a house and the people inside it. In this damp, decaying environment, James presents women struggling to maintain their connections even as family members lose themselves to the house and their own decay. RELIC masterfully anticipates the fears and ideas of the audience, leading to a powerful conclusion about what we owe our family despite their mean, monstrous, or horrifying aspects.

Kay (Emily Mortimer) and her daughter, Sam (Bella Heathcote), arrive at her mother’s house in the woods to find it deserted. There’s no sign of her mother, Edna (Robyn Nevin), and no clue as to where she could have gone. The house is filled with signs of Edna’s dementia – fruit left to go rotten, Post-It note reminders of household chores, locks on doors to stop her wandering – but no sign of Edna herself. Kay and Sam settle in to search the nearby woods and clean the house of the mould around the place.

RELIC’s form of horror is quiet, creeping, and unsettling. A rustling of clothes without wind; a shadow that shouldn’t be there; the sounds of bumps and scratching in the night. The camera lingers on images of decay and neglect that send a shiver of disgust through us: expanding spots of mould in an old wardrobe, water soaking into wooden floorboards, and Kay’s recurring nightmare of a decaying human body in the woods. The house itself is ageing and falling apart. Eschewing jump-scares, RELIC crawls in and settles with a chill under your skin.

This quiet is paralleled by the depiction of Edna’s slow decline into dementia and the impact it has on her family. Kay wakes one morning to find Edna at the stove boiling the kettle. She’s covered in bruises and can’t – or won’t – tell her family where she’s been. She snaps at Kay and Sam. She accuses them of stealing or conspiring against her. She’s not the loving grandmother to Sam that she once was. Like watching the house fall apart gradually, there’s a slow horror in slowly losing a person.

There are a lot of horror films that situate at least part of their horror in fear of the elderly and, in particular, fear of elderly bodies. For the first part of the film, RELIC seems to be treading this path. Robyn Nevin gives an outstanding and subtly horrifying performance as Edna but one that initially appears to feed into the horror genre’s unfortunate stigmas towards the elderly and the mentally ill.

However, James brilliantly anticipates that reaction and subverts it as she propels the film forwards in unexpected ways. As the film pivots its horror away from Edna and towards the house itself, RELIC’s originality comes into view. The ‘haunted house’ is a well-trod trope in horror. Mike Flanagan’s The Haunting of Hill House TV series and his disappointing THE SHINING sequel, DOCTOR SLEEP, are recent examples of the best and worst elements of the haunted house subgenre. James presents a haunted house story fresh enough to be original while borrowing the most interesting aspects of forerunners in literature and cinema. The impossible geometries of the house recall Mark Z. Danielewski’s postmodern haunted house novel, House of Leaves, while a Lovecraftian feel oozes out of the candles that Edna continually carves into eldritch shapes.

By the end of the film, it’s clear how James has cleverly led the viewer down a path of not only emotion and fear but of their ideas about the elderly and how films—especially horror films—depict elderly bodies. We start to view the ever-present decay differently: not as something to be feared but as something to be treated. RELIC brings together its themes of ageing and decay in a stunning final scene that is as clever and subversive as it is touching. It’s a terrific woman-led horror film that demonstrates horror’s ability to tackle weighty subject matters with intelligence and sensitivity.