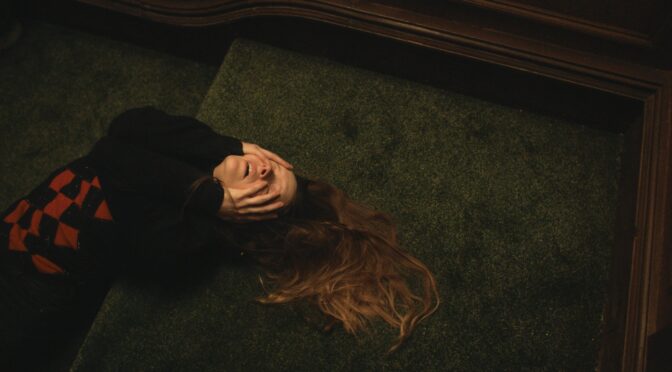 A saviour of the world in the form of a palliative care nurse should be comforting, right? Wrong. In this biblical nightmare, devotion warps itself into divine obsession. Rose Glass’ debut feature SAINT MAUD is an outstanding example of a sinister horror that is equal parts tactile and terrifying.

Newcomer Morfydd Clark plays the character of Maud, a private agency nurse specialising in palliative care sent to look after ex-dancer and small-time celebrity, Amanda (Jennifer Ehle), who has been diagnosed with terminal cancer. On the stormy, bleak coast of Scarborough, Maud attends dutifully to her patient, believing it is her destiny to convert souls to Christianity and thereby, saving them. The interior of the house possesses a bohemian grandness that has seen better days, and every creak of the floorboards is ominous. Clark’s performance is haunting and refined, moderating a delicate balance of the outward impression she is coping and the tormenting uncertainty she feels inside.

“SAINT MAUD is an outstanding example of a sinister horror that is equal parts tactile and terrifying.”

The film nods to horror tropes including possession and symbolism, but it is refreshingly original in exploring the relationship between religion and the soul. Maud is under the impression God has decided her role will be caring for Amanda in her final days, and also showing her the path to religion. As she is a relatively new convert, this devotion is fascinating: the degree of intensity rises as she faces more obstacles in her quest to enlightenment. We watch her experience orgasmic fits when she ‘connects’ with the lord, including the unsettling stretching of her eye sockets as this holy experience grips her. Amanda is intrigued by her nurse and joins her in moments of prayer, but quickly loses interest and spends her time with her lover Carol (Lily Frazer) instead. This further aggravation feels like a test from God about Maud’s devotion to her soul-saving cause. The sound-design is thrilling and nauseating, producing a physical recoiling at the bloody self-inflictions she commits upon her body. She smiles almost sadistically at she steps into nail-laced shoes and kneels upon grains as she preys. Nothing short of agony is good enough as a demonstration of her faith.

“The sound-design is thrilling and nauseating, producing a physical recoiling at the bloody self-inflictions she commits upon her body”

Glass weaves in the art and poetry of William Blake, which Maud decorates her barren room with as a shine. Blake was renowned for his belief in the body as being an extension of the soul, and that humans were fallible, leading them to fall from grace. Maud’s anxiety manifests into paranoia and psychosis, as she fears being branded as guilty and disobedient. This lingering trauma is hinted to when Maud bumps into her old co-worker at the hospital, who seems surprised that Maud is still working in the care profession, as a more sinister feeling begins to seep in. It is evident how isolated she feels, her face silently screaming as she is burdened by this holy task alone. Yet she is unflinching in her mission, as the film descends into unspeakable horror. SAINT MAUD is an accomplished first feature for Glass, hinting at big things from her in the future.