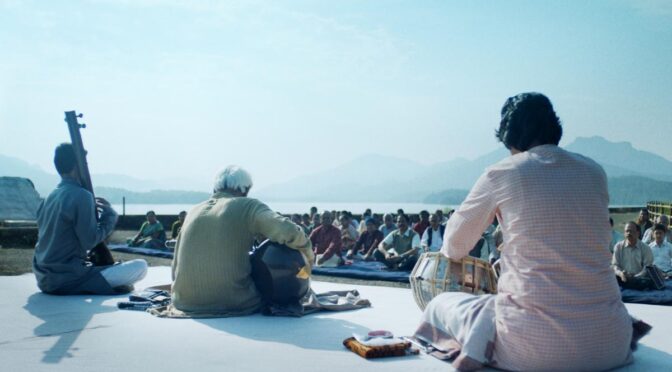 A tradition in art is a conversation conducted by artists across time. In classical Indian aesthetics, the concept of Rasa, or taste, is essential: its presence will activate in the observer an emotion specific to that art. But if the artist fails to activate that emotional response, and is thereby unable to converse with those who came before them, what then? Even worse, what if the tradition the artist works in conceals its weaknesses, has an unclear, shrouded methodology, and is based in reactionary thinking? Is the tradition – if its practitioners aren’t good enough, if it can’t readily communicate itself to a contemporary audience – even worth the energy spent to preserve it?

These, among many others, are questions broached in Chaitanya Tamhane’s THE DISCIPLE. The acolyte here is Sharad (Aditya Modak), a devotee of Hindustani classical music, who studies with his guruji (Arun Dravid) to become a vocalist specialising in raag, improvisational compositions emphasising the artful interaction of voice and instrument. He spends his downtime listening to recordings of the much-acclaimed (by those Sharad emulates) Maai, a singer in the tradition whose lectures pinpoint the dedication to truth required of the music’s practitioners. He listens while riding his moped, shown in slowed-motion, plugging out the world as notes from a sitar’s strings resound and he enters into an elitist fantasy of his own unperceived greatness.

Sharad is beginning to enter vocal competitions, and flashbacks demonstrate how his passion for the music was kindled: his father, obsessive and not too observant of the effects of this obsession, is shown lecturing young Sharad on the technicalities of raag, while the boy keeps on at the harmonium, interested, but not that interested. Years later, the adult Sharad has inherited not only his father’s ardour but a number of his other inhospitable habits. He’s self-centred to exactly the same degree that he lacks self-awareness. During one competition early in the film, as the prize winners are announced, the camera dollies towards Sharad, as if in expectation of his victory. His name goes unmentioned, and the camera keeps training in on him, undermining any sense of his adequacy.

By comparison with Tamhane’s debut, COURT, the direction in THE DISCIPLE is more insistent and the style less static, which are both to the film’s benefit, and, at times, not. Tamhane (who also edits the film) favours staging-in-depth, allowing a viewer to select the element in the space worth isolating, and he frequently composes his shots with pronounced diagonals, which create (with splendid economy) oppositions within a single frame. But where the stasis of the camera in COURT contributes to its sense of dynamism, the script and performances allowed room to roam without distractions, the style of his second film opts for self-consciously bravura movements – dolly and travelling shots galore. Sometimes these are employed with great relish (the Teacher’s Day act; Sharad’s final performance), but other moments are purely reiterative of something Modak’s acting communicates with abundant clarity: the unbridgeable distance between Sharad’s estimation of himself and the treatment he’s afforded. And, similar to the very final gesture of COURT, an opacity creeps into THE DISCIPLE that can be readily attributed to the main character. Still, on occasion – Sharad, late in the day, jumping around his bedroom – it looks like an opacity coming from the director’s department.

THE DISCIPLE is structured across three time-periods with flashbacks nestled into each, and across its different sections the film is closely attentive to how Sharad interacts with media, and how these change over time. His side-gig early in the film involves digitising analogue media, which is how he has access to Maai’s reactionary lectures. In the film’s later movements, looking precisely like his father, Sharad continues adapting to technological changes but also appears to disdain them. He stops in the street to stare at a large perfume advert of a woman beckoning him towards her; his porn consumption is notably altered; he watches, with a dismissive, bored scowl, a TV talent show called Fame India, charting the “journey” of a contestant from a shy young woman into a charismatic pop-star, related in a glitzy, hyperactive style. Sharad’s interest in these media – or at least the recurring ways in which he notices them – is Tamhane’s interest too: the film’s presentation of this mass of authorless moving images seems like the director reflecting upon the cinema.

The potential hauteur of this attitude should not be confused with the one evident in Sharad’s beloved tapes of Maai’s esoteric verbiage; in a flashback, meticulously placed in the narrative, Sharad meets a music critic who, in a great slow-burning conversation, dispels some of his illusions. THE DISCIPLE is its own argument against both the superiority inculcated in Sharad by Maai and his guruji and the hollowness of forms inspired by the aesthetics of advertising. As such the film’s most skilful act is the tonal control, in the vein of INSIDE LLEWYN DAVIS, involved in facilitating Sharad’s gradual slide into an awareness of his own disappointments; of his emerging cognisance of being too far gone in life, of not having done enough earlier, of having been backed, by his wobbly ideas of artistic purity, into a corner out from which he cannot move.