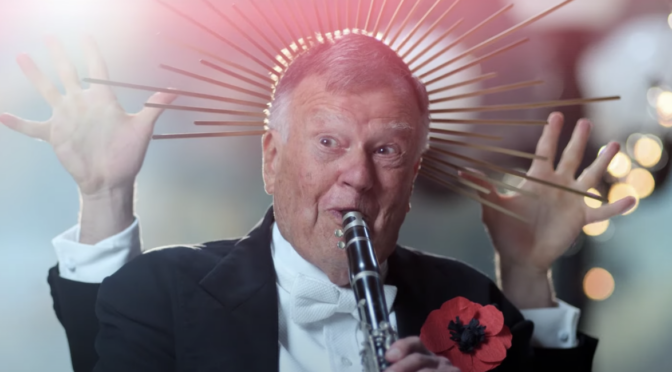 In DICK JOHNSON IS DEAD filmmaker Kirsten Johnson stages her father’s death in a range of gruesome and hilarious vignettes while also delving into the changes in his life since he started showing signs of dementia. A mix of documentary and bizarre quasi-sketches, DICK JOHNSON IS DEAD uses its juxtapositions to create a bright and vibrant depiction of coming to terms with death that takes grieving outside the confines of the hospital or the hospice.

Having lost her mother to Alzheimer’s disease, Johnson’s documentary aims to both preserve her father as she remembers him and to come to terms with his eventual death. As a psychiatrist himself, Dick agrees and throws himself into acting out his own death as a way to help his daughter process her grief. We see Dick Johnson crushed by a falling air-conditioner, pierced through the neck with a nail, bent and broken after falling down the stairs at home, and, in the film’s most fantastical scenes, in heaven with his wife, Bruce Lee, and Frida Kahlo among others.

The film is buoyed along by Dick Johnson himself. Dick has an innate charm whether he’s talking to a stunt performer preparing to play him having a heart attack or to a make-up artist rigging up a fake-blood device for him to wear. There’s deep and abiding community love for Dick as we see in the emotional scenes of his fake funeral where he watches stoically from the church doorway while his friends, family, and former patients eulogise him. Kirsten Johnson succeeds in capturing Dick’s charm even as he starts to lose himself.

For a film about death, DICK JOHNSON IS DEAD is incredibly colourful and vibrant. It’s far away from the gloom, greys, and muted palettes that we often associate with death in cinema. Even the scenes of Dick’s many deaths have colour and light. The image of Dick in heaven being showered with multi-coloured confetti while dipping his fingers into a chocolate fountain is undeniably joyous. These images build into the kind of celebration and acknowledgement of death that is slowly becoming more prevalent in Western culture. Despite having almost precisely the opposite premise, the film recalls Lulu Wang’s THE FAREWELL in its depiction of a younger family member saying goodbye to an older relative and doing so outside of the traditionally depicted environments of a hospital deathbed or a quiet hospice.

Kirsten Johnson has a powerful attachment to film and its ability to help process emotions. As well as using film as a way to come to terms with her father’s death, we see Johnson’s appreciation for cinema in the documentary’s many references to sources from David Lynch to THE CABINET OF DR. CALIGARI. There’s also an insight into the process behind the film with shots behind-the-scenes of Dick’s death scenes and snippets of Johnson herself recording the film’s narration in her closet at home. Film is the impetus for the project itself as Johnson tells us that she was inspired by the absence of any film images of her mother before Alzheimer’s set in. In an emotional scene, Johnson shows the only footage she has of her mother and tells us that the woman on film is not the vibrant person she remembers. In DICK JOHNSON IS DEAD, Johnson has made a record of her father as she wants to remember him and a vibrant tribute to a beloved man.