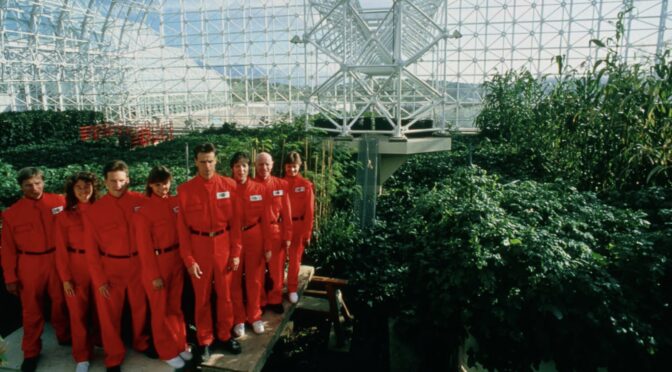 Ask anyone uncomfortable with their love of reality TV what they like about it and they might just – half-heartedly – frame its merits as somewhat scientific. What happens when you put people in a house and surveil them, 24 hours a day? What can we learn about attraction when we put lots of single (and occasionally not single) hotties in a lush villa together? While these ideas sound fascinating on paper, in execution we’re less interested in the human condition than we are tearing it to shreds. ‘Science’ becomes pantomime.

So was the fate of the ill-fated Biosphere 2 at the heart of Spaceship Earth. Dreamt up as a research project that would prepare humanity as it looked to a future of space travel, instead it was never more fascinating than when something was going wrong. Developments in biology don’t make headlines the way sneaking objects from the outside world into a closed atmosphere do, like someone flying a plane over the Big Brother house to let housemates know what’s in the news.

One in a long line of ideas by a collective formed in the 1960s, the documentary starts as a celebration of what people can achieve together. Led by the charismatic John Allen, these young adults would set themselves a goal and finesse it before moving on to something bigger and better, like setting up a commune, then building a boat. They travelled the world, opening a hotel in Kathmandu, managing an art gallery in London, caretaking land in the Australian outback. Their string of successful collaborations was complemented by their origins as a dramatic troupe, fuelled at first equally by expression and achievement. It’s hard not to feel impressed when one of the group says they were starting different projects in different biomes so they could experience the entire planet. No one could criticise the scale of their ambition.

Director Matt Wolf shifts then from establishing who the people involved were to why Biosphere 2 was their next logical step. The project was conceived in the 1980s when the threat of mutually assured destruction was still in the air, but so too was the threat of climate change (oh – how far we have come). Suddenly the documentary feels as if the group were acting out of necessity: Earth has a shelf life, and we are speeding that process along. Are we prepared for our own survival?

There’s a sincerity to the group’s actions, which is too pure for a world that thrives on failure. Having succeeded at whatever they put their mind to, they wanted to help with the big picture. But with eyes on the eight people who entered Biosphere 2 – Biosphere 1 being the planet – the general population were more interested in why the project would be fruitless. With the intention of creating a self-sustaining atmosphere and living inside it for two years, the actual science becomes useless the minute the experiment becomes uncontrolled. That means when it’s revealed oxygen is being pumped in from outside, it’s headline-worthy for two reasons: foul play is undermining the project, and it turns the people inside into a laughing stock for continuing on with a two-year plan that’s already been dismissed before its conclusion.

Is it a matter of too many cooks? “Small groups are engines of change” is spoken early on, and you believe it. As the group’s vision grew, it inevitably drew in variables they had no grasp on. The financial investment of Ed Bass, one of the richest people in the world, looms large, before a twist deep into the third act with ramifications to this day. Whether it’s money or purveyors of fake news weaponising information for political gain, the grander their goal, the more the group seem to have been susceptible to failure.

It is also hard to shake the cynicism grinding against the group’s motivational self-belief. Punters pay to observe Biosphere 2, turning those inside into reality TV show contestants. The news cycle was never that interested in their admirable mission, to prolong humanity’s existence through interplanetary travel, but was quick to mock. And then there’s that twist, where people with influence seize an opportunity to frame a narrative, away from science and fact, towards emotional manipulation of the masses: like reality TV.

The good news is that many of those who were there when the group formed are still involved in what they set up decades ago. They seem happier too to have put Biosphere 2 behind them and taken ownership over what they can manage. While it shouldn’t put anyone off dreaming big, it’s not insignificant that this collective has spent decades together and have put sustainable systems in place all across the globe. The film’s cynicism is impossible to ignore, but it may be outshone by what we can achieve together harmoniously.