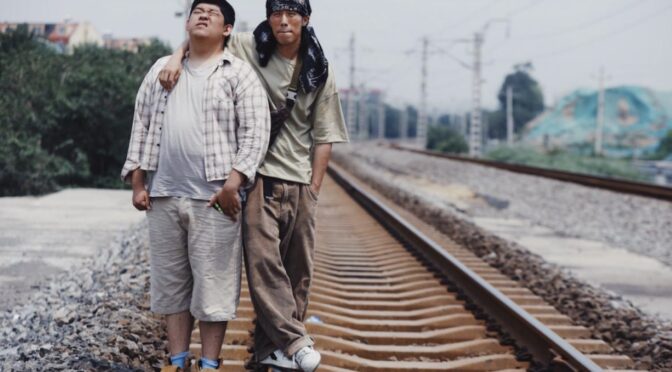 STRIDING INTO THE WIND, directed by Wei Shujun, takes viewers on a journey of exploration, discovery and freedom.

Zuo Kun (You Zhou) is a young final-year university student studying at the School of Cinematography in China. Viewers can immediately note his evident talent with creative mediums, although Kun longs to be anywhere other than cooped up in a classroom being told what to do.

Through an array of beautifully shot locations and a battered old Jeep, we are driven across Beijing on a group quest for joy and the breaking of worldly constraints. In a way, the Jeep is a reflection of Kun’s character, an embodiment of shabby free-spiritedness.

After abandoning a driving test during the film’s opening scene we, as viewers, are still taken along on his road trip-esque expedition. Being a part of Kun’s clique was a privilege; his characterisation is admirable, likewise to the presentation of the text itself.

Shujun’s creation is articulate and ambitious, demanding a viewer’s focus in the most subtle manner. STRIDING INTO THE WIND does not overtly attempt to grasp your time, however, it does reward viewers for paying attention. You will learn about the intricacies of the protagonist and his values, all while being surrounded by breathtaking scenery and life among contemporary China.

The way that the film showed Kun executing his love for camerawork despite leaving film school on this sudden trip was heartwarming. We see him dancing, laughing and capturing the universe through his lens, free from the walls which previously confined him. There is an instant transformation of demeanour; a wilting flower blossoming into a rose.

This is a film about revelation; the discovery of new places and people, and additionally deciding to take personal agency over what feels right in your life. Kun and his friends embark on a rollercoaster of emotions, from restlessness to contentment, that we are guided through all of the way.