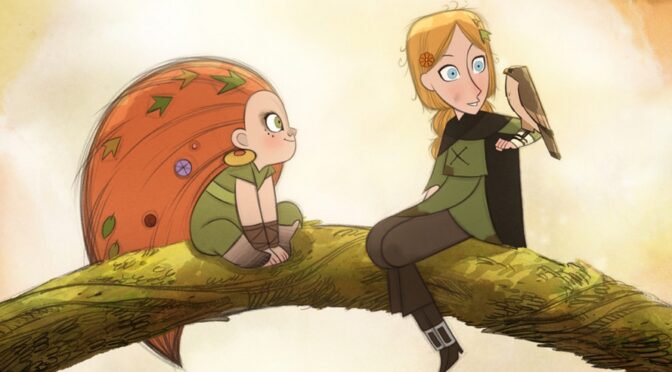 WOLFWALKERS tells the story of a young girl who finds herself out of her depth when an attempt to prove herself to her father leads to life-altering consequences. Directors Tomm Moore and Ross Stewart breathe life into this beautiful animated film, with the theme of family being at the heart of this story.

The film focuses on Robin (Honor Kneafsey), a young girl who has recently moved from England with her father, Bill (Sean Bean), to an English-occupied town in Ireland where Bill has been tasked with ridding the land of wolves that are attacking the locals. One day, Robin decides to follow her father into the woods, to prove that she is capable of hunting the wolves, only to get lost and chased by them. When Robin gets stuck in a trap, a small red wolf tries to help her out and accidentally bites her while trying to free her. Once free, Robin decides to follow the wolves, discovering a magical part of the forest, where the wolves live with two humans – Mebh (Eva Whittaker) and her mother Moll (Maria Doyle Kennedy) – who can leave their bodies and roam as wolves with the pack. Mebh reintroduces herself to Robin, apologising for the bite she gave Robin in her wolf form and healing the wound. When Robin heads back home, she is discovered by her father and the town’s Lord Protector (Simon McBurney), who forces her to go and work within the castle after disobeying the law of the land.

As Robin deals with the consequences of her time in the forest, she discovers that the earlier bite has given her the ability to turn into a wolf when she falls asleep. The film then develops into an interesting twist on the typical werewolf story, as Robin attempts to deal with her new magical abilities surrounded by people who hate and fear wolves. This antagonism is the source of most of the film’s tension: the first time that Robin becomes a wolf, she is chased out of town by her father and the townspeople. The scene showcases some of the film’s darker moments by personifying Robin’s fears, with the shadows and almost horror-like imagery representing the danger and Robin’s fear of the townspeople.

The film has a hand-drawn feel to it, and a style reminiscent of a children’s storybook. This aesthetic gives the film a unique visual style and sense of wonder by being both familiar and distinctive at the same time. From the beautiful animation to the unpredictable narrative and emotional scenes shared with the characters, WOLFWALKERS is a fresh take on a familiar story.