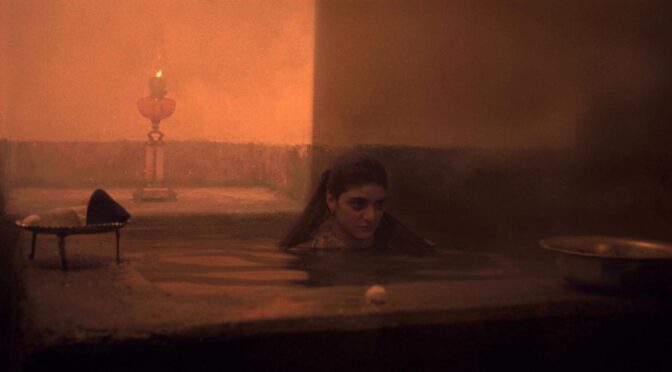 That the story behind THE CHESS GAME OF THE WIND’s premiering, banning, rediscovery, and eventual restoration isn’t more extraordinary than the film itself should emphasise the exceptional nature of director Mohammad Reza Aslani’s achievement.

The film’s screening during the 1976 edition of the Tehran International Film Festival was disrupted, ignored by critics and the festival’s jury, and denied subsequent distribution. After the revolution of 1979, the film was proscribed: its class commentary, sexual openness, and intense, at times expressionist imagery were deemed “non-Islamic.” The film was lost, but a VHS copy, distributed among cinephiles within and outside Iran, encouraged whispers of the film’s quality. In the unlikeliest of ways, in 2014, a print was found in an antique shop and conveyed safely and quietly to Paris, where it was restored, finding its final, ravishing form.

Aslani’s film concerns a noble family during the final years of the Qajar dynasty, splintering under the weight of the inheritance granted them by the death of the family matriarch. Her paraplegic daughter (Fakhri Khorvash) comes into conflict with her step-father, the deceased’s husband, Amoo (Mohamad Ali Keshavarz – who plays the director in Abbas Kiarostami’s THROUGH THE OLIVE TREES), and his nephews, all seeking to isolate the heiress’s wealth for themselves. Only her maid (Shohreh Aghdashloo), it seems, has her care, security, and independence in mind; which is challenged from the outside by a local commissar and Amoo’s debtors: the power relations between them are mapped out with precision by Aslani’s exquisite scheme of staging.

The dust-covered house they stay in is replete with splendours, trinkets and furnishings suited to their apparent esteem (the goldfish bowl hanging from the ceiling is an especially baroque touch), coordinated in a palette of brown, red, and glowing amber. However, it will also be the site of extensive, gothic violence. The film’s class consciousness is located in a Greek chorus of sorts, formed by the gossiping washer-women, who work by the fountain as the camera dollies towards them, catching stray lines about and hints as to the depravity and cruelty possessing the family’s actions. This exact set-up is repeated across the film, and Aslani’s direction creates doubles, laying bare his characters’ motivations and anxieties in the simplest, most forthright way possible (hammers and acid respectively take up more room in the narrative than perhaps expected).

The style of THE CHESS GAME OF THE WIND is probing and stately, making use of expressive lighting schemes that wouldn’t be out of place in a silent film, and extensively choreographed camera movements. For one, the heiress’s first decisive act is captured in a long-take, track-and-pan fashion, the camera gliding alongside the action as if it’s an accomplice. In its movements – and its depiction of aristocratic soul-rot – the film can readily be compared to Luchino Visconti’s film of the same year, L’INNOCENTE. But that’s only a part of Aslani’s vision, which is equally as concerned with the articulation of interiority through process or ritual, as in the maid’s intricately framed, Bressonian demonstration of how to load a pistol; and in the film’s surprising act of queer passion. The stage is very neatly set, not least through the mordant and discordant flarings of composer Sheyda Gharahedaghi’s score, for a horror-inflected finale, which closes on an astonishing pan, revealing, in every sense of the phrase, just how out of the time the family is.

The history of any national cinema is the history of the films’ availability and visibility: the version of Iranian cinema the West receives is filtered necessarily through the tastes of festival programmers, distributors, and later critics and film historians. As such, its shape outside Iran is determined by post-revolutionary cinema, including Kiarostami, Jafar Panahi, Marzieh Meshkini, Samira and Mohsen Makhmalbaf, and more recently by directors such as Asghar Farhadi. The story of Iran’s pre-revolutionary cinema is still to a large extent to be filled in, though restorations like this and the recent one of Dariush Mehrjui’s THE COW are going some distance to expand its parameters, increase its visibility. With this new presentation, THE CHESS GAME OF THE WIND looks set to assume a deserved place as one among the many masterpieces of Iranian cinema.