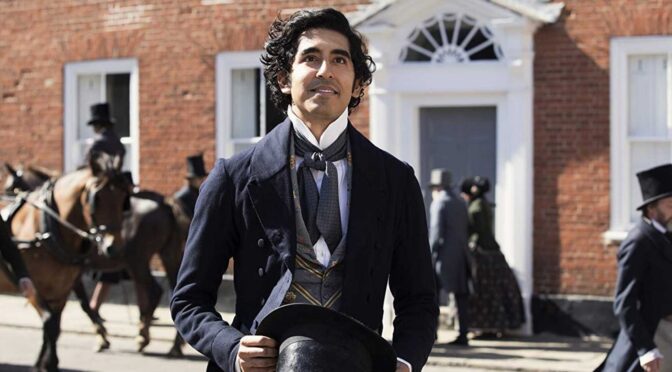 After the blend of dark comedy and cold, hard reality in his last film, THE DEATH OF STALIN, Armando Iannucci returns with a seemingly much lighter prospect, THE PERSONAL HISTORY OF DAVID COPPERFIELD. Though it may seem like a much frothier affair, his adaptation of the Dickens classic retains much of the bite of its predecessor, taking advantage of its framing to deliver commentary on modern society.

This framing takes the form of a live reading of the book of his life by Copperfield (Dev Patel), in much the same setting that Dickens himself delivered his own works to Victorian audiences. As a result, the film takes full advantage of a range of media, from animation to projection, to give the sense of a living story. The excellent score is used to great effect, while the tried and tested use of pathetic fallacy and the unreliable narrator possess much greater meaning in this context. Characters comment on their own portrayals, and strain to break the fourth wall. In some ways, the film does not go far enough in this respect, with the narrative providing ample opportunity to experiment further with its storytelling. This presents the danger of falling into the trap A COCK AND BULL STORY did with a similarly self-reflective classic of literature, however, and so Iannucci’s cautious approach is perhaps the most sensible.

As well as reflecting upon itself, the film also provides a mirror on contemporary society, as Dickens once did upon his. While portrayed more whimsically and less cuttingly than Iannucci’s other work, this commentary remains as effective. When Copperfield is on top, he, and the audience, only see the world they want; one full of the wealthy having a great time. But as the circumstances change, so does the film. The lighting dims, bright colours recede, and the true face of society brings itself to bear. It’s no surprise, then, that the Murdstones and Heeps of this world have dark hair and dark clothes; their true intentions displayed for all to see. Though the casting may be colour blind, their beating of Copperfield certainly has a racist undertone, making them irredeemable villains in the eyes of Copperfield and the audience alike. As Copperfield matures, however, the villains are no longer black and white, even if they appear to be. Though Uriah Heep may be horrid, his perspectives on class struggle do have some validity, such that the film does not delight in his downfall as much as may be expected.

Credit for this goes to Ben Whishaw, who manages to bring sympathy to a character who could very easily become one-dimensional. Of course, his is just one of many outstanding performances in the cast that Iannucci has managed to assemble. Dev Patel once again impresses, capturing the facets of Copperfield’s character with ease. Swinton and Laurie delight as the eccentric Betsey Trotwood and Mr Dick, while Peter Capaldi brings some of his Doctor Who characterisation into the role of Micawber. Though some members of the ensemble only appear for brief moments, they each bring something that ensures the film flies through its two-hour runtime.

THE PERSONAL HISTORY OF DAVID COPPERFIELD charms its audience with its humour, storytelling and sheer kind-heartedness. The blending of classic literature with Iannucci’s satirical sensibilities will appeal to die-hard Dickensians and non-fans alike, providing an opportunity to bring people together that David Copperfield himself would be proud of.