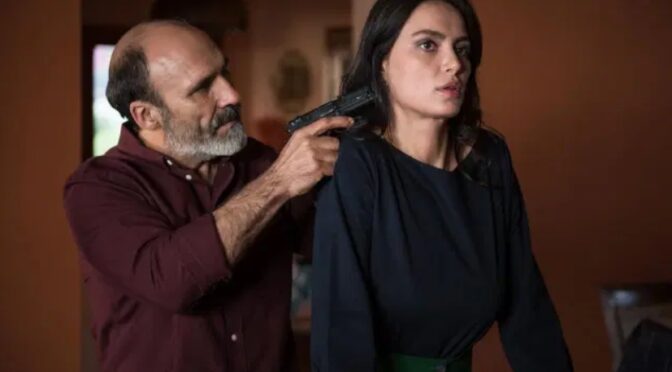 Corneliu Porumboiu’s THE WHISTLERS introduces us to the real-life whistling language El Silbo spoken by the film’s characters as betrayal and romance play out against the grand vistas of the Canary Islands. The director’s latest film exchanges the linear narratives of his previous works for a fractured and stylish crime caper that has just enough ingenuity to break out of its genre trappings.

Bent cop Cristi (Vlad Ivanov) attempts to balance the orders of his superior Magda (Rodica Lazar) and the commands of criminal Paco (Agusti Villaronga) over the fate of Zsolt (Sabin Tambrea), a member of Paco’s ring who knows the location of a large amount of money.

Paco is determined to keep Zsolt out of prison to discover the cash’s whereabouts. However, matters are made more complicated by femme fatale Gilda (Catrinel Marlon), who teams up with Cristi to try and take the cash for themselves. While Ivanov provides a nuanced performance – one where we are never quite certain if his affection for Gilda is genuine or manufactured – general characterisation is weak, and characters display little justification for their actions.

What THE WHISTLERS lacks in character development is mostly made up for in its stylish aesthetic and playful comedy. Collusion and violence take place among both exotic greenery and snowy landscapes. An enthusiastic scouting director stumbles upon a group of gangsters and meets a short and darkly amusing end. Knives are often shoved into mattresses rather than necks, but Porumboiu graciously provides us with gorier moments as characters are dispatched. The strident chords of Iggy Pop’s ‘Passenger’ let us know straight from the beginning that we’ll be taken on a wild journey across the vibrant colours of the Canary Islands. Classic films are lovingly referenced then subverted, with a nod to PSYCHO ranking as my favourite. The director’s self-conscious concern with style is even illustrated in the film’s seven coloured title cards, which briefly introduce the film’s key players with a colour of the rainbow. Richard of York gave battle in vain, as do a fair number of Porumboiu’s characters in their desire for hidden loot.

The director’s seventh feature marks a significant diversion from his previous works. THE WHISTLER lacks the straightforward plotting and everyday settings of previous films, but if you’re up for high-octane thrills and a bit of backstabbing, then you’ll certainly be a willing passenger on this voyage.