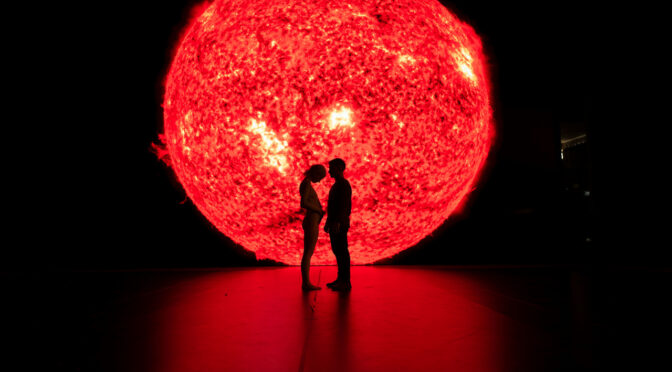 The characters in some of Pablo Larraín’s films tend to run away from him, to exceed the grasp of his understanding; sometimes the style of the films will try and mask this and – when it fails to – underline the misunderstanding to a greater degree. This is true of both JACKIE and NERUDA: both craftily metafictional biopics; both films whose ostensible subjects are near enough the least interesting aspects of them.

And then comes Ema, played with a magnetising force by Mariana Di Girolamo. She’s introduced engaging in many mutually destructive arguments with her choreographer husband, Gastón (Gael García Bernal), and performing in his latest ensemble piece. The source of their antipathy is sketchily drawn: they had, not a year earlier, adopted a son, Polo (Cristián Suárez). Polo, seemingly imitating Ema’s favoured pastime, caused a conflagration, injuring Ema’s sister in the process and was returned to Child Protective Services. Their conversations, framed in direct-to-camera point-of-view shots to better demonstrate Ema’s ensorceling charisma, are circular: Ema demeans Gastón sexually; Gastón berates her for her emotional abandonment of Polo.

Ema’s enthusiasm isn’t for her husband’s arrangements: she and her friends are reggaeton dancers, a dance characterised mainly by actions of the upper-body, fluid movements between swiftly formed lines, denoting the build-up, modulation, and release of pent-up energy. And profound amounts of hip-thrusting. In formation, the routines become acts of collective self-assertion: the proclamation of friendship, confidence, disdain, sexual desire – anything that can be expressed. A montage late in the film essentially amounts to a music video, shot in different locations around the Chilean port city of Valparaíso. One passage from this, of the group hunched down and surging forward as one on a rooftop, is monumental: as they advance they gradually straighten their backs, their heads emerging level with the skyline.

“The film’s opening image is of a set of traffic lights on fire: economically informing a viewer that the film isn’t going to abide by any idea of normativity.”

The film’s opening image is of a set of traffic lights on fire: economically informing a viewer that the film isn’t going to abide by any idea of normativity. Ema, who cuts a striking figure with her slicked-back, peroxide-dyed blonde hair, is a melee of free-floating, competing energies: she’s bisexual (she becomes involved with the lawyer – played by Paola Giannini – handling her divorce from Gastón); she’s a pyromaniac, her friends facilitating her immolation sessions; lastly, the scheme she spends the film’s narrative enacting is sociopathic at the very least. In Nicolás Jaar’s score, the sounding of a phrase from a steelpan announces the next phase of her plotting: at the result of which, she informs Anibal (Santiago Cabrera), one of her lovers, “you will be horrified.”

But Larraín botches the ending. Doubly a shame, because Guillermo Calderón and Alejandro Moreno’s script is a spiky and unpredictable object, both in terms of what Ema will do next and, more fascinatingly, what she will say next. Her dialogue is abrasive and flirtatious, absurdly detailed, filled to the brim with barbs and remarks which mark the presence of a talented observer – and manipulator – of human nature. Gastón’s words are more hurried and more cringeworthy: he has a worrying lack of discretion, a willingness to air out his dirty laundry at any moment. It is as if all the time he spends not arguing is only a pause until he resumes the psycho-sexual games of the narrative which Ema, in her mastery of the same, will never lose. A monologue near the end marks a ridiculous repetition, a ridiculous non-disclosure to the people being addressed, and what follows is a ridiculous error of judgement.

“Sergio Armstrong’s cinematography, notable for its abundant travelling shots and for the way it handsomely colour-coordinates the different sex-scenes in green and blue, suffers from one indulgence too many.”

Sergio Armstrong’s cinematography, notable for its abundant travelling shots and for the way it handsomely colour-coordinates the different sex-scenes in green and blue, suffers from one indulgence too many. The shots involving accelerant imagery – Ema, adorning a flamethrower and visor, letting the fire spray from her like a dragon – are embarrassing: it’s flagrant #OnePerfectShot courting, and it serves only a slither of narrative and emotional purpose despite its emphasis.

EMA is noteworthy as a study of a great, possessive and possessing performance; and as a dance movie whose dance sequences relate to the substance of the narrative – unlike, say, Gaspar Noé’s CLIMAX, or Luca Guadagnino’s SUSPIRIA. But as a study of a character, EMA joins Larraín’s gallery of films about subjects he seeks to control – and cannot.