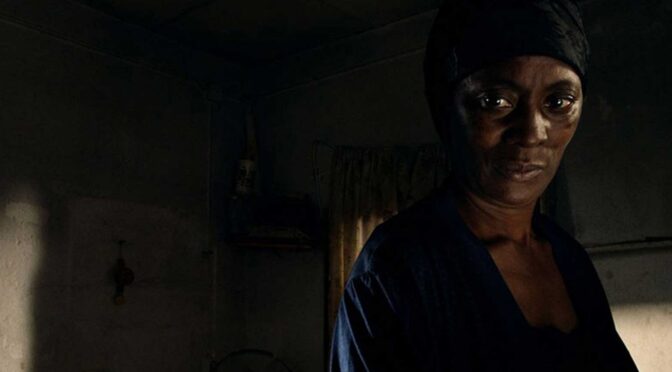 Between 1997 and 2006, Pedro Costa made a trilogy of films – comprising BONES, IN VANDA’S ROOM, and COLOSSAL YOUTH – which is set in and features the participation of residents, mostly Cape Verdean migrants, of a slum in Lisbon by the name of Fontaínhas. In the third and greatest of the three, by which time the neighbourhood itself has been demolished and its inhabitants relocated, Costa introduces a man named Ventura, played by himself (Ventura José Tavares Borges). To many in the film, he’s a paternal figure.

Costa’s HORSE MONEY, his next feature, a memory-play of sorts, stars Ventura as himself again. However, there the docu-fictional aspect is complicated by the fact the (non-)narrative resembles Jean-Marie Straub and Danièle Huillet’s NOT RECONCILED, a film in which period signifiers are removed. Ventura, visibly ill, with a pronounced tremor, plays himself at different periods in his own life. One of the many profound moments in HORSE MONEY comes when Ventura meets a woman from Cape Verde, who has saved up for years to finally join her husband in Portugal, only to arrive in Lisbon three days after his funeral. Her name is Vitalina Varela.

VITALINA VARELA, in which Vitalina plays herself, fleshes out the story as briefly recounted in HORSE MONEY. She arrives ten minutes into the film, after a haunting opening sequence during which a group of men emerge out of the darkness of a street slowly, walking away from the burial of Vitalina’s husband, Joaquim: in the dead of night, the mourning of the dead. Vitalina is shown tentatively exiting an aeroplane; while on the tarmac, the airport’s janitorial staff approach her, and tell her, in the peculiar tone of dialogue of Costa’s films, one filled with both sympathy and menace: “Here in Portugal there is nothing for you. His house is not yours. Go back home.”

Vitalina takes up residence in that same house, all the while thinking back to the one she and Joaquim built together, in 45 days, in Cape Verde. In his essay “Nature,” Ralph Waldo Emerson writes: “Every spirit builds itself a house; and beyond its house, a world; and beyond its world, a heaven.” But this house, the site of her husband’s death, is falling apart; the roof hangs together by a sheet, and in the shower, a piece of the ceiling drops on her head. She deals with hangers-on, destitute friends of her husband who loom and insinuate. She speaks with a couple, Ntoni (Manuel Tavares Almeida) and Marina (Maria Alves Domingues), who are homeless, who tell her of her husband’s generosity towards them. She meets Ventura, here playing the neighbourhood priest whose abandoned parish, a small metal shack of a church, causes him to think God’s house is in disrepair. He walks the streets muttering gnomic utterances to God, himself, the past, and whoever may be listening (in one instance he says: “Candle on the mattress. Nothing left of that love,” words with a terrible, fastening sense of adumbration). Vitalina also talks to herself: her words come in the form of grief’s monologues.

Varela performs this with total possession. In HORSE MONEY, the shock of her presence is manifested in the whisper of her grieving voice, drawing a viewer closer to the screen. Naturally, since she’s present more frequently in VITALINA VARELA, her performance grows in stature. She has a preternatural stillness in repose; in one scene, the whole dynamic is changed by the position she adopts: sitting up, her head is cocked towards her left, while her right arm is stretched out to provide balance. In others, whether talking with Ventura’s priest or speaking to the dead, with her quiet, controlled voice, she demonstrates the full force of her attention. Through her line readings and her grief-hurt stare, Varela’s performance somehow becomes both entrancing and estranging, always only moments away from inducing a shiver.

There’s a scene, during her first visit to her husband’s house, which should clue a viewer in to Costa’s method of filmmaking and how inseparable it is from the collaboration of the actors. Vitalina sits on a stool in a darkened bedroom, a mirror to her right, a window to her left through which small pockets of light are entering, falling across her face and the shoulder of her leather jacket. She looks into the mirror, first taking off her earrings, then putting on a headscarf, the full frame in focus. This shot, in its composition and texture, in its interplay of deep darkness and precise lighting, is a succession of Renaissance portraits of Vitalina. Many of Costa’s chiaroscuro images, indebted to those of Jacques Tourneur, are gasp-inducing in and of themselves. A later shot of Ventura, framed through the single circle of an iron gate, is like a Byzantine icon. The complexity of Costa and cinematographer Leonardo Simões’s compositional arrangements matches the overwhelming suffering of Vitalina and other characters, but the film’s beauty opens up a possible objection to Costa’s work.

From his Cape Verde-set second film CASA DE LAVA onwards, the prominent criticism of Costa’s films has been that he ‘aestheticises poverty.’ This is inevitable, and there should be conversations of this sort around his work because Costa is a white European from a country with a colonial history. He is an arthouse director, lauded by film festivals and prized by a particular, exclusive audience. He makes art with and about some of the poorest people in Portuguese society. But there’s a crucial point: Costa doesn’t make art of the film’s subjects he makes art with and about them. The films Costa has made since 1997 are all testaments to a method of collaborative production: they are indebted to the presences of the cast, indebted to the performances they provide representing their own experiences, how they embody the emotional fullness of their narratives — narratives that do not belong to Costa, but to Vanda Duarte, Ventura, and Vitalina Varela.