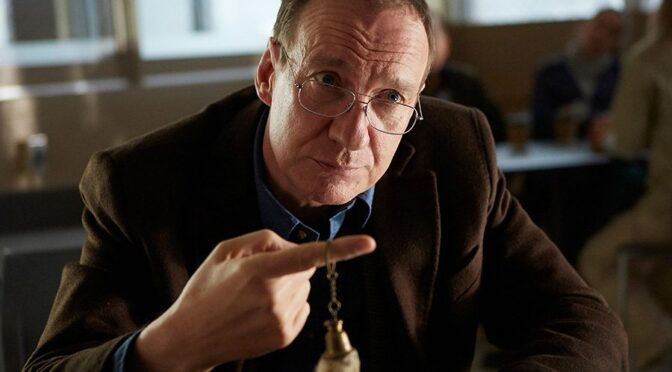 Atom Egoyan’s latest film is a detailed, idiosyncratic and nuanced story that unpicks the threads of a father-daughter relationship. Despite being headed up by an impressive cast and indulgent score, the film suffers from clumsy time scores and impatience, speeding through emotional clauses and conversations. GUEST OF HONOUR is a patchwork-quilted tale that has endearing encounters and curious characters, and a film which holds the viewer’s attention a bit too rigidly at times.

David Thewlis takes on the role of Jim Davies, a Canadian public health inspector whose attitude towards work and life is scrupulous, understandably finicky and politely judgemental. His job is to protect the customer as opposed to chastising restaurants and shutting them down. He possesses no malicious intent and is a quiet, kind soul for the most part. His daughter, Veronica, played by Laysla De Oliveira, is a music teacher and conductor for various recitals around the city with her high school students and bus driver Mike (Rossif Sutherland). We visit the pair at different stages of their life, to understand why Veronica is incarcerated and how different people in their lives contributed towards the crime. In an almost therapy-like confessional environment, Veronica seeks to tell her side of the story to a local vicar, Father Ted.

Jim and Veronica clearly have a tense relationship, despite their closeness when she was younger. He takes her to music lessons, and we see warm memories of her getting her first pet rabbit, Benjamin. Jim’s wife begins to suffer from a long-term illness, and Veronica notices her father and her teacher becoming closer, which she internalises as resentment, knowing her mother is unwell. Jim is clearly deeply in love with his wife, and finding solace in his relationship with the teacher is a way to negate the pain, but evidently impossible to explain to his child. Around the time of her mother passing, tragedy also strikes related to her music classes, guilt which she once again harbours until adulthood. These events appear to accumulate to something much larger, with Jim being unaware of how his decisions have a tumultuous impact on his daughter’s future.

The film follows its own tail around far too much, trying to scrabble a substantial plot into one hour and forty-three minutes; a pleasant enough run-time but not enough to detangle this story. It attempts to grapple with Veronica’s sense of identity during incarceration, and after she has been released. From her childhood study of music to the early relationship with her father and her imprisonment for sexual misconduct with one of her students, you never quite fully understand Egoyan’s intentions. Laysla De Oliveira pushes forth in attempting to portray Veronica’s decisions about the complexity of the crime, and the suggestion that her father is a party to the whole ordeal. Her imprisonment is her decision, deciding to ignore the wrongful charges against her. She decides for this to be her punishment as a way to repent for past events.

“The premise of the tale is fairly simple, yet feels edited with a butcher’s cleaver; it becomes too jumbled, and there is no catharsis at the end.”

Mike is also another interesting character, who gives off the impression of being this hard-done-by man, whose affections for Veronica are unrequited, thus causing him to lash out. He’s evidently jealous of an older student, Clive, who attempts to flirt with Veronica. While Mike voices his disapproval of their flirtations, it is targeted against Veronica in a manner that blames only her. This is not to say that the way she behaves around her students is always correct, and the use of soft lighting with facial close-ups bathes her interactions with Clive in a sexual light. She is absorbed in conducting during the concerts, as many musicians find the physical rhythm in performing. In those scenes, it is the student and Mike who put their own interpretation of flirtation in the moment. It is after this that she acknowledges some boundaries are pushed. The premise of the tale is fairly simple, yet feels edited with a butcher’s cleaver; it becomes too jumbled, and there is no catharsis at the end.

The score lends itself to a traditional style of melodrama, the staccato notes carrying a level of tension that illustrates the way Jim goes about his job. The composer, Mychael Danna, has worked on Egoyan’s previous films, and fills them with class and flair; a perfect audible accompaniment to the fine wine of Thewlis’ performance. There is seldom a moment of silence, as the flow of trumpets and drums from the school band fills up the film with warmth and nostalgia, that sadly compensates for its muddled plot. Jim’s own story is never really vital to the central piece, and while it sketches a portrait of his personality, one altogether believes it would make a great story independent to this film.

“[Mychael Danna] has worked on Egoyan’s previous films, and fills them with class and flair; a perfect audible accompaniment to the fine wine of Thewlis’ performance”

In a nutshell, GUEST OF HONOUR has an interesting tale at its heart, the intention to explore multiple character stories where the links are revealed to us in a disjointed manner. The emotions are subtle; the scenes of tension are brief and heat-fuelled and would work better if the character confrontations felt more damming. The style itself feels similar to Olivier Assayas’ filmmaking in many ways, and perhaps Egoyan’s film deserves to have more drama and grit that it is afforded. The powers at play in this story are bold ones, and the film rushes away from emotional outpourings so as not to be caught up in the sadness, as you are left wondering if they ever did find reconciliation for their relationship.