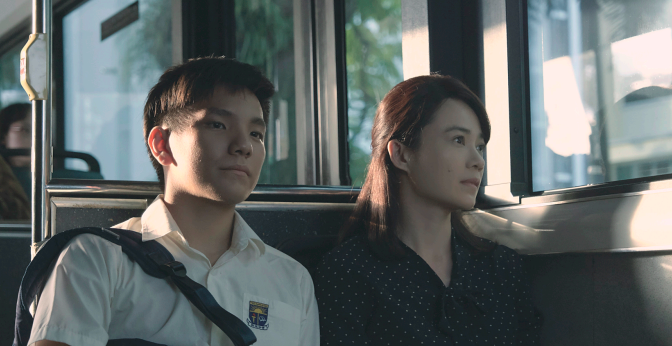 Following the critically acclaimed success of his 2013 hit ILO ILO, which was the first Singaporean feature film to win an award at Cannes Film Festival, Anthony Chen’s WET SEASON marks the second feature film of his career and boasts a selection of familiar faces.

WET SEASON follows the monotonous life of Ling (Yeo Yann Yann), a Chinese teacher receiving in vitro fertilisation treatment in order to help her conceive. Support from her husband Andrew (Christopher Lee) is few and far between as they battle through marriage problems and his frequent absences from their home. As a result of this, Ling begins to form a relationship with one of her students, Kok Wei Lun (Koh Jia Ler) as they grow closer through one-on-one remedial tutoring.

A touching story that details an authentic, albeit despairing experience of human connection. The film’s depiction of an inappropriate and forbidden student-teacher relationship is difficult to watch, though the film does not suffer from this. The performances from the cast make the film, as they stun in undisputed excellence. Yann’s remarkable portrayal of a character that experiences her own metamorphosis throughout the film’s narrative is deeply emotional and moving. Her efforts are only further highlighted in scenes of Ling taking care of her father-in-law (Yang Shi Bin), who is suffering the consequences of a devastating stroke.

It is only through her newfound relationship with Wei Lun that Ling learns to reestablish her identity as an individual. She is able to find power in spite of her difficult circumstances to leave a toxic environment and her narrative proves to be most inspiring. At the film’s end, Ling makes the decision to divorce her husband and return to her colourful hometown in Malaysia where she takes a moment, that proves to be rather poetic, to allow herself the opportunity to bask in the sun. A pleasant, and welcoming contrast from the dusky blues of her former, much darker and depressing, life in Singapore and an encouraging and motivating full-circle moment. The film is filled with interpretative sequences from beginning to end that leaves itself open to several metaphorical readings.

Use of political subtext and social issues compliments Chen’s melancholic worldbuilding, and his use of symbolisation between new life and old is well conveyed. Sam Care’s cinematography exhibits a stunning use of the well known literary device pathetic fallacy, in which we see Ling’s mood only further dampened, and represented on several occasions by weather conditions.

WET SEASON is a gorgeous and tear-jerking work of Singaporean cinema. Though there may have been several opportunities to improve on the pacing of its narrative, the story it tells is so delicate and meaningful that its faults are often overshadowed.