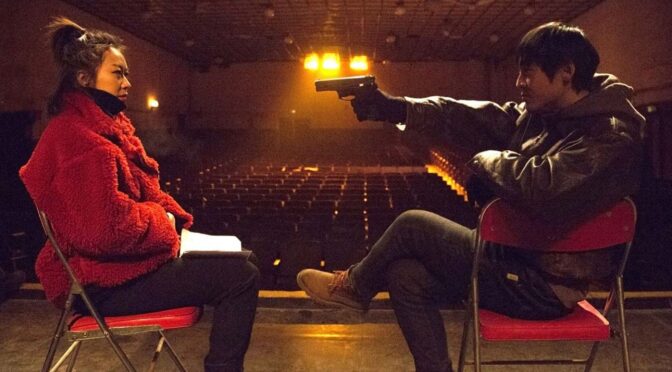 Science fiction has slowly become a much more introspective genre- replacing large set pieces and technical jargon for minimal sets and contemplative screenplays that question man, the universe, and morality. The claustrophobic dwellings of a deer farmers apartment may not sound like the most obvious setting for a sci-fi drama about alternate realities, however, Chong Zhang and Bo Zhang effortlessly pull it off in this mind-bending feature debut: THE FOURTH WALL.

Liu Lu (Lu Liu) is a deer farmer, a lonely job- but that doesn’t worry her, she is reserved and rather closed off from others. After a long day of work, she returns home to find Ma Hai (Ziyi Wang) who wishes to celebrate the new year with her. Ma Hai is clearly attracted to Liu Lu, something she cannot understand as she believes there are far more attractive women out there than her. Suddenly, Ma Hai explains that he has been having dreams about her, and himself. These aren’t your normal run-of-the-mill dreams, though. Ma Hai believes he has been witnessing another version of himself, another life he is currently living, and it all has something to do with an incident in Liu Lu’s childhood, and the scar she has under her left eye. An entire synopsis would not begin to reach into the deeply pensive and encapsulating screenplay of the film.

“Much of the film’s narrative twists are hidden in its dialogue, sprawling monologues about the existence of other universes and the possibility of changing the past to fit the future.”

The two central performances from both actors are engrossing to equal effect as well. One notable strength of an actor is when they have to play two different versions of themselves, and Lu and Wang manage to construct complex characters, both similar to their counterparts and equally, completely different. A film so dialogue laden as this requires actors to manage an effective performance and the two leads play off each other with a keen understanding of their script. The beauty of THE FOURTH WALL lies in its ambiguity, the unwillingness to explain anything that doesn’t need explaining, even leaving out details for the things that do need clarification. Much of the film’s narrative twists are hidden in its dialogue, sprawling monologues about the existence of other universes and the possibility of changing the past to fit the future. It’s not the most straightforward, and the film does take a while before it starts to truly make sense. The film is ultimately very intriguing, if not occasionally convoluted.