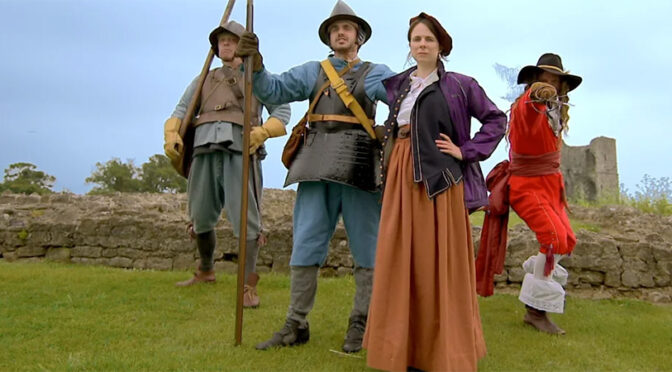 Director Chloe Thomas and writer Kevin Mears’ 12–minute short is a celebration of community and companionship, its charm, channelling the likes of The Detectorists, Hope Dickson Leach’s The Levelling (2014) and Ben Wheatly’s countryside inspired A Field in England (2013) and Sightseers (2012) reinforces the demand for the increasingly popular sub-genre of British rural and folk realism.

It’s not long before rival and Cavalier, Adrian (Perry Fitzpatrick) crashes Roundhead Re-enactment 101 and begins boasting of his upcoming gig while also taking a shine to Rachel, much to Gareth’s dismay. In what is but a snippet of the characters’ lives it shows successfully how much substance and meaning is able to be conveyed in a matter of minutes when done correctly. Much like short stories, short films are often harder to get right when you’re not working with feature length wiggle room.

The dialogue and nuanced character interactions mean that the comedy doesn’t overpower but doesn’t get lost either. There’s a wonderful and witty contrast between the character’s historical authenticity and language and the realities of the modern day which adds to the films eccentric charm.

A Horrible Histories alumnus, Thomas has brought to the film a unique sense of antiquity that’s relatable in the present day. Although Roundheads and Cavaliers will leave you wanting to follow the noble re-enactors further, it still stands on its own as a short and doesn’t at any point feel unfinished or cut off too short. It’ll certainly offer some respite for those dying to get back out into the countryside as well as some much needed amusement too!

Featured in the Shorts to Elate category at the 2019 Cambridge Film Festival audiences can now watch the film on Vimeo.