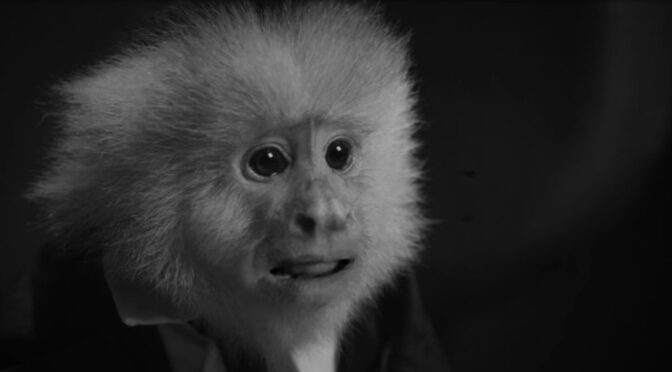 Recently released on Netflix, WHAT DID JACK DO? is a bizarre, beautiful, and funny short film directed by David Lynch. In its 17 minutes, WHAT DID JACK DO? shows some of the tropes of Lynch’s cinematic work in his characteristic ‘late style’ and gives us an insight into the role of cliché.

The 17-minute black and white short film has a detective (David Lynch) meeting a murder suspect, a capuchin monkey called Jack (credited as ‘Jack Cruz’ playing himself), in a train station diner. The bizarre interrogation encompasses farmyard animals, torrid affairs, and the transcendence of love, all wrapped in a film noir atmosphere suffused with hard-boiled detective clichés. Despite its short runtime, it packs in such Lynchian tropes as lingering shots of dark, black coffee, a 1950s-style waitress (Emily Stofle), and a love song written by Lynch and his longtime musical collaborator, Dean Hurley.

WHAT DID JACK DO? was first screened at the Fondation Cartier pour l’Art Contemporain in Paris in November 2017 and subsequently shown as part of the Festival of Disruption, curated by Lynch himself, in Brooklyn, New York in May 2018. The style is of a piece with Lynch’s late style which he would further develop in Twin Peaks: The Return. WHAT DID JACK DO? shows the same stylistic return to Lynch’s cinematic roots that we saw in Twin Peaks: The Return’s seminal Part 8 with cinematography, set design, and enigmatic dialogue all reminiscent of his early short films and his first feature film, ERASERHEAD. Lynch’s late work continues to circle back to the art and style that drew him to cinema in the first place.

Lynch aficionados will be keen to find a place for WHAT DID JACK DO? in the director’s canon and the short film is certainly open to multiple interpretations. The film evokes the TWIN PEAKS: FIRE WALK WITH ME scene in which a monkey’s face appeared in close-up enigmatically saying the single word, “Judy”. Is this murderous monkey somehow related to the dark goddess, Judy / Jowday, from the Twin Peaks mythos? A friend of mine astutely suggested that WHAT DID JACK DO? has a lot in common with Ronnie Rocket, Lynch’s unfinished film project about a noir-inspired detective seeking to enter a different dimension. Again, Lynch could be circling back to his earlier work and the great uncompleted projects of his youth.

The film’s conversation between Lynch’s detective and the besuited monkey is a series of hard-boiled detective clichés ripped from film noir movies: “Well, there is no Santa Claus,” says the detective; “I won’t be here for Christmas,” Jack retorts. The quick succession of these pitch-perfect film-noir clichés self-referentially highlights how easily these melodramatic phrases turn into non-sequiturs. Yet despite the heavy layers of irony involved in inserting a talking monkey into a traditional film noir, there’s a heart of sincerity characteristic of Lynch’s work. Jack’s discussion about the golden transcendence of love and his heartfelt song about his lost love, ‘True Love’s Flame’, are genuinely touching despite coming from the mouth of a little monkey in a suit. Like with his song ‘In Heaven’ sung by the Lady in the Radiator in ERASERHEAD, Lynch isn’t afraid to push sincerely towards heartfelt sentimentality amidst the surreality and darkness of his cinematic worlds. Lynch pushes so far into sentimental cliché that we come around to realising that the sincere truths contained in seemingly tired clichés.

But there’s a danger of overthinking Lynch’s work. Lynch criticism often fails to acknowledge how funny Lynch’s work is and attempts to examine the deeper meanings or grand mythologies of his films and can miss the surface-level humour. WHAT DID JACK DO? is just plain funny: it’s funny to see a small monkey wearing a suit and singing a tender love song about a hen. There may be a lot to interpret and unpack in Lynch’s latest short film but there’s also a streak of humour that makes it just damn fine entertainment.