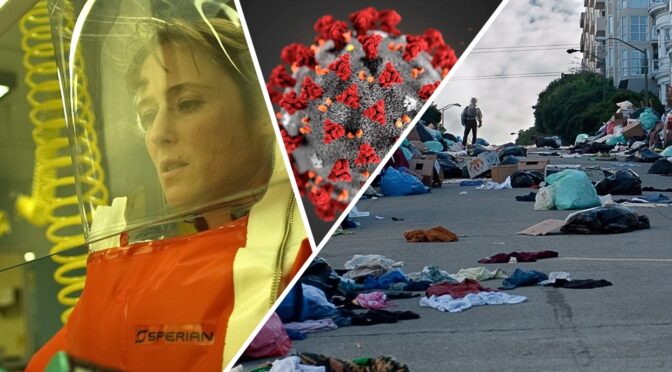 This year, a lot of us have found ourselves with more free time than ever, others have had far less, but all of us have tried to spend it in ways that could help us cope with the world right now. For many, this has meant turning to the simple respite movies offer us: the ability to get lost in a world that is not our own.

Movies have always provided us with that vital escapism in times of crisis, but the picture today is very different from scenes of wartime crowds flocking to cinemas to see the likes of THE WIZARD OF OZ or ARSENIC AND OLD LACE. Whilst we are restrained within our homes, our viewing horizons have never been greater. With practically every piece of recorded entertainment available at an instant, we have a lot more choice over the type of movies we want to watch. Of course, there is still an abundance of content available on streaming services that provide us with that classic escape: whether it be in the fantastical world of a Miyazaki animation or a comfort food sitcom where you can relax, knowing that after 30 minutes, no world-changing event will have radically altered the lives of our main cast. However, this year’s global pandemic has revealed a peculiar habit in our crisis viewing choices, one that fundamentally questions our traditional view of escapism.

“…this year’s global pandemic has revealed a peculiar habit in our crisis viewing choices, one that fundamentally questions our traditional view of escapism.”

If you’ve kept an eye on Netflix’s trending tab in the past few months, you will have noticed that many of us rushed to watch their new original documentary Pandemic: How to Prevent an Outbreak. The series was released on the service just over a month before lockdown was initiated in the UK and soon after, Netflix further capitalised on this by quietly adding Steven Soderbergh’s CONTAGION as well as its 1995 spiritual predecessor OUTBREAK. Not only did both films also reach the trending tab, but their digital sales spiked with CONTAGION reaching number 10 on the iTunes chart. Speaking to the New York Times, Barry Jenkins perfectly summed up the significance of a surge in one-time film purchases nowadays, “I paid $12.99 for a 12-year-old movie, I’ve never done that before”. It is equal parts understandable and baffling, whilst these films have of course been given renewed relevance due to COVID, our typical understanding of escapism would surely mean that they are the last things we would want to watch right now. In a world of notifications and news alerts continually reminding you how bad it’s getting out there, why would so many of us head en-masse to the kind of stories that mirror our current situation instead of those that let us escape it?

Whilst it may seem strange, Media Psychologist Dr Pamela Rutledge has posited that there are various potential reasons for these anti-escapist viewing urges, and if there’s one thing you can’t fault the omnipotent Netflix algorithm for, it’s pre-empting the idiosyncrasies of your subconscious wants and needs. The most obvious and compelling reason is that because of our current circumstances, we can evoke a much greater depth of empathy and connection with the characters on screen. Rutledge argued that it can be therapeutic to watch characters work through the same issues we are going through now as “it makes us feel we’re not alone”. However, whilst CONTAGION has been lauded for its Simpsons-level accuracy of predicting events during the COVID-19 pandemic, there is a limit to how well it can represent our current fears and anxieties, both for better and for worse.

“However, whilst CONTAGION has been lauded for its Simpsons-level accuracy of predicting events during the COVID-19 pandemic, there is a limit to how well it can represent our current fears and anxieties, both for better and for worse.”

In some ways, the pandemic of CONTAGION shows us a worst-case scenario of a viral outbreak: its virus has a much higher death rate than that of the Coronavirus. It could be possible that by watching CONTAGION, we are actually chasing collective reassurance that things could be a lot worse. Research has shown that a potential reason why we watch sad or scary movies is that it compels us to reflect on the comparative safety and stability of our own lives, so in a way returning to our own reality becomes the escape. However, not only is such an idea completely inapplicable to so many whose lives have been severely affected by this virus, it’s a sad fact that when looking at the current state of our world, CONTAGION is in many ways an optimistic view of global pandemics. Soderbergh admits that whilst the film deftly predicted the spread of misinformation, he couldn’t foresee the unprecedented challenges of our present political and social climate and the societal fractures that we face on top of the threat of the virus. Furthermore, whilst it is clear that 2020 has been particularly terrible, it would also be a truly sobering realisation if we all have to watch a film where a mother and son die in the first 20 minutes to feel better about the world.

The core problem with Rutledge’s argument when applied to this scenario and in our motivations in watching movies like CONTAGION, is that we also empathise as a means to an end, which is to find answers to the problems that the characters struggle through. As Rutledge says, “there’s a resolution to these stories so we can express our anxiety that way… any thriller ramps up a lot of anxiety and fear that then gets resolved by the end”. John Yorke adds in his book on storytelling, Into the Woods, that we consume stories to traverse the profound issues we face in our lives, whether it be coming of age or a heartbreak. Soderbergh has said that his ultra-realistic approach in the film and its use of many movie stars was trying to emulate an old Irwin Allen movie to “scare a lot of people”. Many of us watched this nine-year-old movie for the first time in a desperate search for answers, only to find that it was made as a warning, not as a solution to our current problems. CONTAGION is a hopeful story where international coordination prevails, and a vaccine is found and mass-distributed in a matter of months. The problem with that right now for many is that the brief connection we have with these characters ends with a clean resolution, one that looks less and less likely as our real-world carries on.

When we turn to films like CONTAGION in vague hopes of answers to our problems, we realise that this motivation is semi-masochistic in nature. Like watching WHEN HARRY MET SALLY after a bad break up, we know that seeing their happy ending will only make us feel worse that we didn’t get one, but that is almost the point. Catharsis can be a powerful effect of watching a film like CONTAGION right now. Amy Seimetz, director of SHE DIES TOMORROW, (about a woman who’s anxiety becomes contagious) said that watching Soderbergh’s thriller was like a release valve for the negative emotions she had been bottling up. Whilst more mindless escapist content was good for a while, she noted that eventually she “needed to feel those emotions, like sadness, loss and fear…I found it strangely comforting”. This catharsis can be extremely positive, but for many others who have shared their experiences of watching CONTAGION, such an effect is not uniform. Releasing these negative emotions can be cathartic for some, but for others, it can send us into an even worse spiral.

“Releasing these negative emotions can be cathartic for some, but for others, it can send us into an even worse spiral.”

It seems that we are stuck between two extremes: either devoting ourselves to pure escapist entertainment so much that we neglect our negative emotions, or facing them head-on by watching movies like CONTAGION that puts us at risk of an even greater wave of fear and anxiety. However, there are movies out there which fall somewhere in the middle, ones that allow us to reckon with both ends of this emotional spectrum. Such “happy-sad” movies include the likes of HER, ETERNAL SUNSHINE OF THE SPOTLESS MIND, STAND BY ME and PAN’S LABYRINTH. They could also be referred to as melancholic, but for the sake of not sounding like you’re writing a diary in the 1800s, happy-sad is the preferable term.

These movies were in no way designed to be watched during a global pandemic, but they may be the perfect things to watch right now. What is different about these movies is how they embrace uncertainty; they don’t reward their characters’ struggles with perfectly happy endings, but neither do they frame their conclusions as tragic losses. It’s this intentional lack of clear resolution that is so comforting, as it forces you to reflect and realise that maybe it’s ok not to have all the answers right now. Some things are outwith our control and embracing that – rather than trying to find a clear answer – can actually be extremely comforting. Of course, embracing the inherent uncertainty and ephemerality of our existence won’t be all smiles; but it can provide much-needed relief for those problems in life that don’t have easy answers.

“Some things are outwith our control and embracing that – rather than trying to find a clear answer – can actually be extremely comforting.”

INSIDE LLEWYN DAVIS is a movie about one man realising he will never achieve his dream, and his life crumbling as a result; it is also my go-to feel-good movie. The film follows a folk singer over one week where, much like 2020, almost every conceivable thing that could go wrong in his life does. As he makes his desperate last attempt to become a successful musician, he is met at every turn by cosmic misfortune and serendipitous comeuppance for his mistakes. The ending shows him literally being kicked whilst he’s down in an alleyway, as Bob Dylan plays on the stage he just left, destined to realise Llewyn’s dream. However, every time I watch that ending, I get a warm feeling inside. It’s not because I am a sadist, but because I watched that film at a time where I felt like my life wasn’t going the way I wanted to, and I was deathly terrified of the same failure and rejection Llewyn met. His story allowed me to laugh at what I was scared of; it’s a comedy that makes light of human misery and the fact that people can be dealt rotten hands in life and although they learn nothing from it, that’s ok.

Whatever you decide to watch right now that helps you cope – whether it be MURIEL’S WEDDING or MANCHESTER BY THE SEA that helps you through this time – it can all be valid in some shape or another. However, I hope you look for the type of film which I think a lot of us need right now. The ones that show us that we don’t need to escape our reality outright nor deal with it all at once, but that we can embrace the fact that the world is random and at times very scary, and we don’t need to worry as much whether or not we’re going to get that happy ending. That’s why MAMMA MIA exists.

If you’d like to hear more abouyt Ewan’s connection with INSIDE LLEWYN DAVIS, and some more thoughts on the themes of the article, you can check out his video essay below: