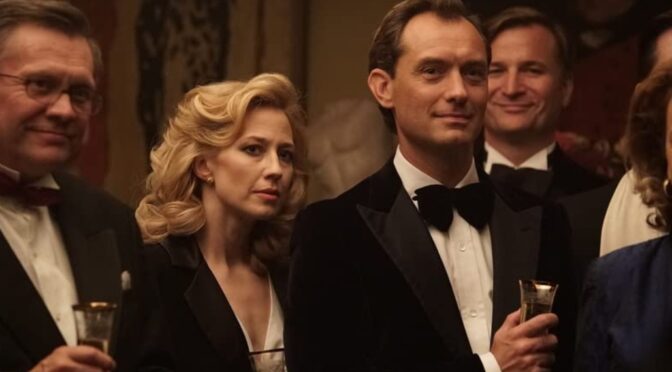 Sean Durkin’s first feature film since MARTHA MARCY MAY MARLENE – one of the best debuts of the previous decade – is a parable of the pursuit of prosperity begetting toxicity. Durkin’s characters and story show the descent of a family unit and place of shelter into a nest of vipers.

The film begins in 1980s USA, with Rory (Jude Law) moving his family to his native England despite the scepticism of his wife Allison (Carrie Coon). Taking up a commodities broker position with his old firm in London, the family (which includes his two children) find themselves rattling around a vast country mansion, adrift from other people and – increasingly – each other. Allison is the primary vessel for the despair this brings, as she finds herself isolated, her beloved horse skittish, her children rebellious and troubled, and her faith in her husband’s motivations waning.

The ominous and discordant tone Durkin established in MARTHA MARCY MAY MARLENE can be found in THE NEST as well, albeit in different surroundings. The vast and slightly off-kilter estate the characters occupy has more than a hint of THE SHINING about it. Whilst the house is not, of course, as dizzyingly unknowable and confusing as the Overlook Hotel, it is still hard to get a sense of space (indeed, Rory introduces it to his children by highlighting a secret door).

As well constructed as Durkin’s space and tone is – the flat, desaturated, and sunless locales conveying the increasing bleakness of the characters’ moods – the most engaging aspect of the film are the lead performances. Jude Law’s Rory is an eye-catching picture of materialistically-driven male arrogance, soaked in the individualism of 1980s Britain and America. His devotion to bullshitting his way to the top of the tree would have resonance in any era, but that aspect of the script feels particularly pertinent in the age of spin and ‘alternative facts’. Carrie Coon’s performance is one of rising resentment, with the worst fears about how her husband’s ambition manifests coming to fruition. Her tense body language escalates throughout the film; an initially composed and relaxed woman, as the film moves through intensifying stressors, becomes one with folded arms, sucking on cigarettes as if they were her only remaining source of life.

The ideas floating around in Durkin’s script never quite coalesce into as a tight package as MARTHA MARCY MAY MARLENE did. His debut’s tense paranoia and taut tone give a focused view on cult dynamics and exploitation of young woman like Elizabeth Olsen’s lead character. THE NEST, however, has a much more diffuse lens capturing various shades of male arrogance, materialistic greed, casual misogyny, and the personal impact of Reagan/Thatcher-style economic individualism. As a result, the film doesn’t quite lodge itself in the post-viewing consciousness as much as Durkin’s debut, despite an engaging and captivating pair of lead performances.