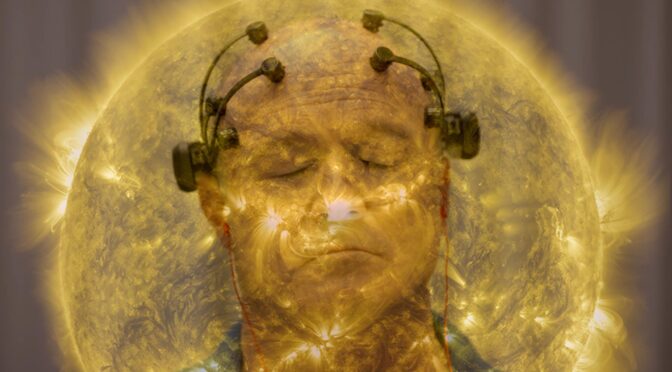 Like the literary essay, the film essay delights in wandering, alighting on connections that beckon the essay’s separate parts to draw closer together, to tantalise a viewer with the suggestion that the subject’s depth is deeper and its resonance more resonant than previously thought. It provides a cinematic alternative to the straight-laced, tightly defined discursive practices of more standard modes of documentary filmmaking; it’s a rebuke to the usual arrangement of well-sourced archival material buttressed with talking heads as figures of authority. The essay film announces its own authority in the formal freedom it takes to discover a unique path through the linked labyrinths of culture, politics, and history.

But this should not be taken as an endorsement of all the conclusions of all essay films. At times these are reached via glanced-at connections, partial and half-conducted arguments, and opaque presentations of material. Theo Anthony’s ALL LIGHT, EVERYWHERE is somewhere in the middle.

When concerned with the present, the film has three compartments linked both thematically and materially. Anthony and crew visit Axon Enterprise’s Arizona headquarters, where Steve Tuttle, a chipper public relations head, walks them around the premises, all captured in stately, promotionally-inflected Steadicam long-takes. Tuttle, who looks and sounds and moves a bit like Bob Odenkirk, puts on his best advertising voice and lays out the company’s MO: producing body cameras, “non-lethal weapons” – such as electric tasers, drones and other paraphernalia – to be used by police departments and the military (as if there were a material difference between the two).

In Baltimore, Maryland, the director’s cameras sit in on a training session for Baltimore Police Department officers, the subject at hand being how to use Axon’s body cameras on the job and how to link up the accompanying website (an outsourcing of police work to a corporate entity). Also in Baltimore, the film follows the efforts of Ross McNutt, the president of Persistent Surveillance Systems, a company whose driving aim is to use a plane fitted with Google Earth-style camera technology in order to keep constant watch over what he describes as “troubled cities.”

But the close relationship between innovations in ocular technology, policing and the military, ultimately serving the interests of capital, are not new. Anthony and his team take detours through inventions and experiments in photography by Pierre Janssen (the 1874 Transit of Venus), Étienne-Jules Marey (motion studies conducted with subjects from colonised Senegal), Alphonse Bertillon (whose anthropometry introduced forensic photography to police work), the eugenicist Francis Galton (composite photography), and Julius Neubronner (fitting pigeons with lightweight cameras for wartime aerial reconnaissance, in effect a live prototype drone). Though these quick studies in photographic history and its co-option by the state are fascinating, it’s redolent of the film’s approach to the material that it doesn’t always assert what it seems to be asserting, or does not secure the integrity of its connections.

Part of the problem is formal, part of it is in the film’s disposition. In the main, the film ends up with passages that create a kind of audio-visual trance, a montage-reverie of images lap-dissolving into others, all backed with Dan Deacon’s brassy, almost late-Bon Iver score, and voiced-over by the calm, flat affect of Keaver Brenai’s voice. These continue for some time; before a hard cut stops the music dead and moves to a new composition. These smash edits are the film’s argumentative strategy in miniature: move quickly, with a thud, to the next join, the suddenness concealing the illogic of the transition.

Anthony’s film wants to pack in as much as possible, but this leads to frequent acts of interpretive overreaching. At the start, subtitles inform a viewer that at light’s point of entry into the eye, there is a blind spot, or scotoma. This is true: where the optic nerve passes through the optic disk of the retina, there are no photoreceptor cells. From here, Anthony makes an enormous leap to the Axon body camera, which shows a 142° wide-angle from where it’s mounted, but cannot show the officer who wears it: this is its blind spot. But these are not analogous, because one of them is by design, as Tuttle’s walk-through presentation reveals. The increasing militarisation of the American police depends upon these cameras, and the interpretability of the footage they capture. (Ingrid Raphael and Melissa Gira Grant’s THEY WON’T CALL IT MURDER, also playing at this year’s Doc/Fest, attests to the ease with which officers get away with killing citizens.) These facts deserve more pressing analysis than a thematic parallel to the fallibility of the human eye.

ALL LIGHT, EVERYWHERE is also concerned with laying bare the cinematic apparatus, to show the constructedness of its own form (it even includes a well-referenced bibliography). Aside from the director appearing before the camera, there are shots of Anthony’s desktop, editing software, and even a moment when Brenai takes a breath because, as the subtitles note, when films have voiceovers they usually edit out the speaker’s breathing. This would be helpful if it weren’t about the most opaque material in the film. Anthony may well be, to borrow a term of Jonathan Rosenbaum’s, “objectifying his subjectivity,” but it’s not always clear to what end.

On the other hand, where the film succeeds is as a primer on visual literacy, always questioning its images (particularly those from the Axon cameras, or McNutt’s God’s-eye-view), asking what they omit, how they are structured, how the form makes claims on the visual information it contains. This is a way of interpreting the ending, which, by Anthony’s admission, he could not find room for in the body of the essay. If it looks tacked on, that’s regrettable, because it’s completely of a piece with the film’s argument, and is one of the few moments when the argue-by-parallel design seems organic, and offers a measure of hope: it’s a passing of the baton of critical visual literacy to the next generation, to those who will need it.