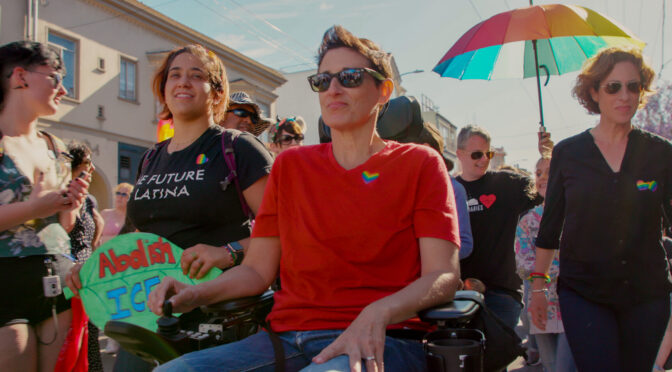 In 1990 Deneuve (renamed to Curve in 1996 following a lawsuit from actor, Katherine Deneuve) was launched by Franco Stevens, and is still regarded as the longest-running, best-selling lesbian magazine in the world. Franco’s vision was to create a vehicle that would reach out to global lesbian communities, dispense information, and raise visibility. In the present day, with digital media, in many ways, sounding the death toll of the traditional magazine, Franco is forced to think of new innovative ways to keep Curve current.

AHEAD OF THE CURVE documents the beginnings of this radical and unapologetic publication and its evolution and contribution to the queer community. At a time where there already existed several gay magazines for men, finally, queer women could see people in the media that looked like them and represented them during a time where being openly lesbian in positions of power, government and popular culture in the early nineties was still a rarity.

The likes of Lea DeLaria, Jewelle Gomez, and Melissa Etheridge recount their connections with the magazine and its breakthrough and pioneering goal to increase visibility and act as a resource for the lesbian community. We’re introduced to Denice Frohman (a poet and educator) and Andrea Pino-Silva (an author and activist), representing the new generation of LGBTQIA+ activists and pioneers.

Running throughout the film is Franco’s own story; of how she was outed to her family and subsequently estranged from her mother, her injury which led to handing over the reins of Curve to someone else and the birth of the magazine and how she was able to achieve this with the support of the community around her.

Director Jen Ranin celebrates the innovation and necessity of Franco’s vision and how vital Curve has been in creating a foundation to establish and support the LGBTQIA+ community, but what Franco begins to realise is that the community has changed and that a new generation is building on her legacy in different ways. For example, in one scene filmed at Clexacon – at which Franco is on a panel – the term “lesbian” is discussed, an identifier which has now, for many people, become dated, sexualised and can feel exclusionary. Although, it’s agreed that the term still needs to be claimed by the community, other broader identifiers, such as “queer”, feel more encompassing of their identity and more inclusive. What AHEAD OF THE CURVE does is bring the past and present together, acknowledging the importance of publications like Curve as a foundation for future generations and embracing the present and the evolution of the community as a whole.

“Being visible is most important,” Franco states, and she’s right. Visibility is still political and fundamental today – at a time of equal marriage, there’s a complacency and assumption that people in the community are safe. Still, in numerous states across the US, in fact, housing and job protections for LGBTQIA+ folk have been revoked, and the rate of increase of violence, especially on trans women of colour, is at a high. Again, it seems there’s an increasing dehumanisation of LGBTQIA+ people, which is why fighting for visibility is so vital. Although AHEAD OF THE CURVE highlights the struggles and exclusions experienced by the queer community, its overall message is a hopeful one. New generations are picking up the legacies left behind and are moulding and shaping them to give today’s communities a voice.

AHEAD OF THE CURVE will inspire courage and perseverance in those that feel lost or disconnected from their community, especially in a time of isolation. It reignites the need for increased visibility in society and a need to preserve our own queer spaces and cultures.

Curve magazine is still running, and Franco has set up the Curve Foundation to empower lesbian, queer women, trans women, and non-binary people to share in the culture and stories, connect with each other, and raise visibility.