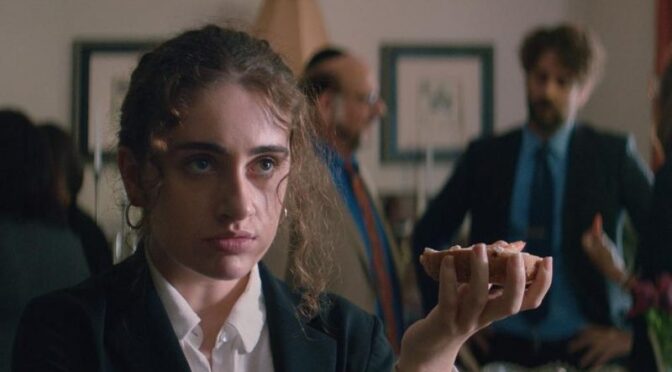 SHIVA BABY, the feature debut from director Emma Seligman, is a whirlwind of anxiety where a conflict between the personal and the familial erupts at a shiva while surrounded by relatives, community, and salmon and cream cheese bagels. Seligman’s film ratchets up the lightly comedic social tension in a way that speaks to the anxieties of the modern Jewish-American young woman and the wider Jewish community.

The film opens with Danielle (Rachel Sennott) rushing from an appointment with her sugar daddy, Max (Danny Defarrari), to attend a shiva with her parents. She’s shocked to find not only her ex-girlfriend, Maya (Molly Gordon), but Max in attendance at the shiva party too. Danielle is forced to negotiate the tensions of her worlds colliding in the worst possible place: a social situation laden with tradition, ceremony, and community.

SHIVA BABY expands on Seligman’s undergraduate thesis short film of the same name in a way that not only adds polish to the production but extends the themes of the film and provides more depth to the central character. Rachel Sennott plays Danielle in both versions and gives a more assured and effective performance in the feature, due in part to a script that gives her character more room to breathe and explore the effect of the heightening social tension on Danielle.

Sennott’s performance is key to the film, and she’s terrific at subtly expressing her discomfort at the situation through small facial movements and how she carries herself. Her performance balances Danielle’s savviness with an awkwardness that reminds the viewer of how young and unequipped the character is to navigate this social situation. There are also strong performances from Danielle’s mother (Polly Draper) and father (Fred Melamed), which tread the line of stereotype – overbearing Jewish-American mother and slightly detached oblivious father – but feel drawn from real-life experience rather than cliché.

Tension suffuses the film centred on Danielle’s conflict between her real self and the self she has to be with her family. This comic tension ratchets up throughout the film in a similar way to Ruben Östlund’s FORCE MAJEURE to a point of high-intensity anxiety towards the end. Ariel Marx’s score contributes to and highlights this tension with a soundtrack of strings that wouldn’t be out of place in a horror film. The viewer can hear the tension coiled in each instrument’s individual strings, reflecting Danielle’s increasing anxiousness.

The film also gestures towards an underlying tension between modern Jewish-American young women and the wider Jewish community. Danielle’s sex work and bisexuality, the major sources of her anxiety at the shiva, position her on the edge of her community, but, more subtly, so does her talk of gender studies (“gender business” as her father has it) and feminism. The film’s many signifiers of Jewish-American identity feel embedded in real life rather than parodic and situate the film’s anxiety in modern American cultural Judaism in ways reminiscent of the Coen brothers’ A SERIOUS MAN or the Safdie brothers’ UNCUT GEMS. However, Seligman’s focus on Danielle’s experiences as a young queer woman and the lightly comedic tone sets SHIVA BABY apart from these other explorations of tension in modern cultural Judaism.