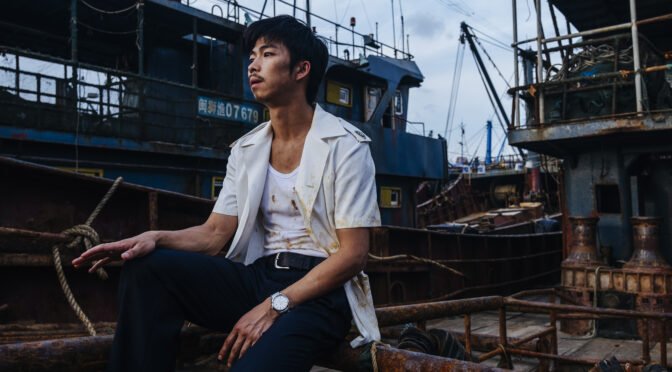 Taking a decidedly more casual approach to its noirish stylings than Diao Yi’nan’s THE WILD GOOSE LAKE (or even the second chapter of Jia Zhang-ke’s ASH IS PUREST WHITE), Li Xiaofeng’s BACK TO THE WHARF has a quality that could trip a viewer up on occasion. Its narrative starts and stops, introduces a new concern, then parks it, returning to it only in the most strategic way. However, it then ramps up the violence that is the bridge between characters siphoned off from one another, yoking them together, forcing a resolution at once inevitable and hard to square with the leisurely pace of most of the film.

Before the incident that incites the narrative, Song Hao was a star pupil, fast-tracked to university. But his exam results are strong enough that his teachers decide to give the automatic spot to his friend Li Tang, whose father is the fishing town’s mayor. Both Hao and his father seek to redress the situation but make a fatal error, occasioning Hao to escape to Guangzhou, where he becomes a stone-carver. In one of the film’s many moments of inspired staging, fifteen years pass in the time it takes for Hao (now played by Zhang Yu) to emerge from out of a cloud of stone dust. His mother has died, and he is returning home for the funeral, setting in motion a reconciliation on the one hand and his being ensnared in a cruel scheme (by a watchful and patient sociopath) on the other.

The film’s start-stop quality tests the narrative’s elasticity at points, and sometimes the feints appear ill-thought-out. For example, the way the daughter of the man involved in the incident that caused Hao to leave turns up, leaves, and turns up again only underscores that she’s been sidelined, perhaps in an extension of noir’s customarily less than generous sexual politics. Likewise, the intrusions of old classmate Li Tang (Lee Hong-chi) into Hao’s life can mount a challenge against patience because since he attended university in his place, he’s now a property developer weaving threads of corruption wherever he goes. Lee hams it up appropriately, even though his villainy would be obvious from the too-too tight purple suit he’s sporting.

Zhang Yu, whose amazing blankness animates Hu Bo’s AN ELEPHANT SITTING STILL, is wonderful at moving scenes along via tiny gestures. Unfortunately, his performance fits the film’s scheme too closely and seems to necessitate the out-of-nowhere bursts of violence that tip the film’s scale: including a ridiculous chase across a traffic jam wielding a shovel. The film seeks to justify its more outlandish and ghoulish scenes with reference to the repression of Zhang’s acting in a way that’s not wholly convincing.

Although there’s something to be said for the film’s tonal experiments, the particular register of its placidity, there’s less to commend in its final third, where nihilism and moralism are oddly entwined.

But BACK TO THE WHARF is also the site of surprising pleasures. When Hao arrives back in town for the first time since fleeing, he meets Pan Xiaoshuang (Song Jia), an old classmate, working at the toll booth. She has harboured an attraction towards him for years, and so, when he attempts to leave not long after their reunion, she drops the barrier on his car and insists on taking him to dinner. Driving home, it begins raining, and so Xiaoshuang opens her umbrella through the open space where his windshield should be. A delightful bit of staging.

Even better, though it occurs during one of the film’s worst scenes (set on a luxury party yacht: as though Li Tang’s unctuous manner doesn’t scream “wrong’un” loud enough already), is the stellar rendition of “Da Hai A Gu Xiang” (“Sea, my Hometown”) by the Hong Kong tenor Warren Mok Wah-yeun, which is well-chosen not just for the song’s beauty itself, but for the way it italicises Hao’s story: he is, after all, returning to his hometown by the sea.