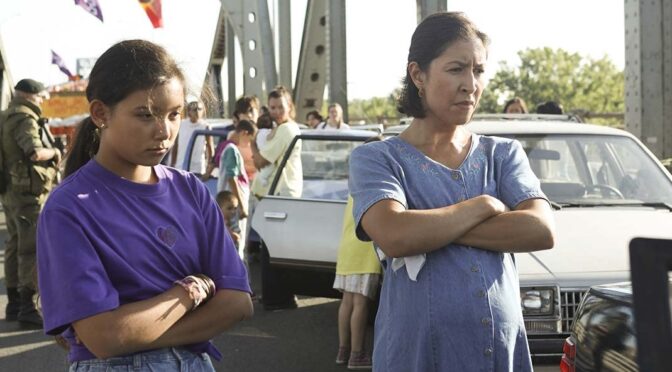 Coming-of-age stories set against monumental national or world events are a cinematic constant. BEANS excels at both portions of its story, even if it sometimes struggles to connect them.

Beans is the nickname of Tekahentahkhwa, a twelve-year-old Mohawk girl interviewing for a place at Queen Heights Academy. She knows she wants to be a doctor or a lawyer, but she cannot quite say why – and worries this hesitancy will cost her a place at the prestigious secondary school. But before she can dwell on her education, her mother and aunt are caught up in the Oka Crisis, a land dispute in Quebec that resulted in two fatalities and violent clashes between the police and Mohawk Nation protecting their land. Seeking to make a difference, Beans takes up with the older April to toughen herself up and join the fight.

Director Tracey Deer witnessed the Oka Crisis in her youth and drew on her experiences in telling Tekahentahkhwa’s story. The terror of both police raids and Quebecois antipathy and apathy are blood-curdling – missile- and tear gas-filled raids come out of nowhere, and one of the film’s most harrowing sequences is merely a drive through stone-throwing counter-protesters. She captures the senselessness of the violence through Bean’s eyes while also showing the effect the events have on the justice-driven child.

The coming-of-age beats feel predictable in their familiarity and incongruous with the rest of the story in the middle portion. It is not necessarily the worst effect, highlighting the universality of joyous and ugly teenage milestones – ill-informed boyfriends, sneaking alcohol, and late-night pool. However, against a backdrop of the Oka Crisis, these familiar beats add extra inevitability and perhaps too clean a conclusion to Bean’s arc. The neatness is jarring, considering that the crisis itself had mixed results for Mohawk sovereignty and land.

That said, BEANS makes its rage and joy known as Tekahentahkhwa embraces her abilities and identity. Kiawentiio’s vibrant performance lends freshness to familiar beats and grows in size and autonomy through this self-discovery in history. The film could not have a better protagonist for its exploration of Canada’s chequered past.