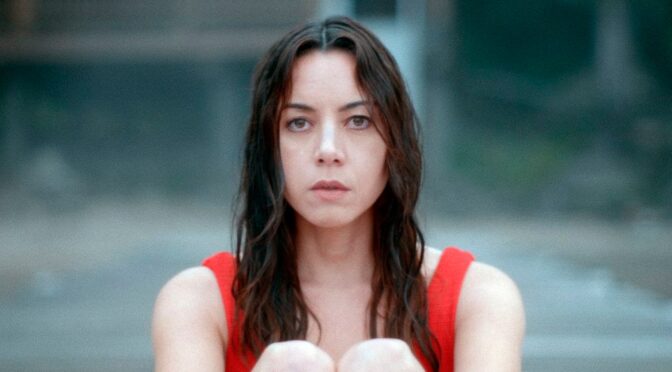 BLACK BEAR ruminates on the nature of creativity, self-expression, and traumatic inspiration in a manner that may be impossible to unpick. Although the lack of answers will be frustrating for some, playing over the structure and narrative is an intriguing riddle and adds further lustre to the central trio’s performances.

As the film opens, we find Aubrey Plaza’s Allison sitting alone on a jetty by a lakehouse. As a chaptered heading begins (‘The Bear in the Road’), we find she is an actor-turned-filmmaker seeking inspiration at the rural retreat of Gabe (Christopher Abbott) and his pregnant partner Blair (Sarah Gadon). Gabe is a problematic and terse – and possibly emotionally abusive – companion to Blair, who in turn denigrates his inert musical career. Theirs is a tense dynamic, one picked up on by the increasingly awkward Allison and further complicated the developing sexual tension between Allison and Gabe. After playing this scenario out to a high-strung conclusion, the film switches into a second chaptered segment (‘The Bear by the Boat House’), centred upon a film shoot at the house, which flips the characters’ roles and dynamics completely – or does it?

To outline the precise nature of those scrambled dynamics would remove the interest of deciphering the meaning in precisely how the film switches up those roles. BLACK BEAR is the sort of film which can support many different interpretations, and writer and director Lawrence Michael Levine’s true intention is difficult to decipher.

“BLACK BEAR is the sort of film which can support many different interpretations, and writer and director Lawrence Michael Levine’s true intention is difficult to decipher.”

The nature of the two sections of the film (and the enigmatic bookends to them) is such that it is impossible to relate one in any linear or well-defined fashion to the other. The confusing blend could be considered a comment on many things, but the strongest allegory is perhaps for the nature of creative processes. The first segment could be the in-story inspiration for the film produced in the second. Still, as the same actors are inhabiting different roles, that switch deftly manages to comment on how a person’s nature can only truly be defined by how they relate to others. Which of the two segments is ‘real’ – if, indeed, either is, as opposed to Allison’s bookending scenes of solitude – is impossible to decipher, particularly as the film’s mirroring of events and personalities proceeds in a way that seems to echo endlessly. Levine’s characters are reborn as different people but seem to finish their stories at similar destinations regardless, meaning that they are presented as both finite and immortal figures. BLACK BEAR’s narrative effectively eats itself, hinting that the artistic process is another manifestation of a circular nature of life, death, and rebirth. The ancient Ouroboros symbol of a snake eating its own tail feels particularly apt as a means of visualising the feeling of watching BLACK BEAR. Similar to the symbol adopted by different cultures, the film plays out almost as a paradox representing renewal in various guises.

“The ancient Ouroboros symbol of a snake eating its own tail feels particularly apt as a means of visualising the feeling of watching BLACK BEAR[,] a paradox representing renewal in various guises.”

Throughout this, the central performances are subtle enough not to force a simple reading onto the characters’ interactions but impassioned enough to engross a viewer. As the main focal point, Aubrey Plaza will undoubtedly garner attention and praise for her multi-layered performance as Allison, but the film’s real strength comes from the trio as a whole. Abbott plays Gabe as a noxious arsehole with the edgy, dark comedy he is so adept at bringing to his best roles. As engaging as Plaza is, her performance would exist in a vacuum without the contrasting one of Sarah Gadon, who displays vulnerability and manipulation at various points to balance Plaza’s role, inhabiting Blair as the yin to Allison’s yang.

In the end, BLACK BEAR is a bit of a Penrose triangle of a film. Viewed from certain angles, it may make little sense, but when considered from a new vantage point or spun around, it paradoxically comes together elegantly and beautifully.