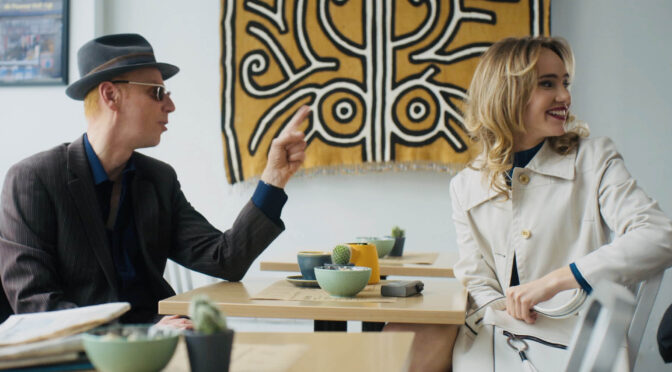 On paper, CREATION STORIES has all the ingredients of a successful musically focused biopic. Alan McGee’s life, the story and names associated with his Creation Records label, Ewen Bremner in a lead role, and an Irvine Welsh co-credit on the script should all lend themselves to a hard-hitting story with a tap-along soundtrack. However, the sum total is a disjointed and confusing film that doesn’t even use the iconic music as a fallback in the absence of a compelling narrative.

Alan McGee (Ewen Bremner), famous as the founder of Creation Records, has his first break managing The Jesus and Mary Chain before finding further success with Primal Scream. The film follows McGee’s childhood and difficult family relationships, and then we watch him juggling his musical ambitions with his drudge of a job at British Rail. Later success in unearthing Oasis coincides with McGee’s addiction issues and political role in promoting Tony Blair’s New Labour in the late 1990s. The story is framed through multiple interview sessions with journalist Jemma (Suki Waterhouse).

The opening credits are a potted history of modern British music history and reflect where the film’s greatest strengths should lie: the tunes supplementing the rags-to-riches story/narrative. Instead, however, the film jumps back and forth between McGee’s early history and an interview in Los Angeles framing his description of events. As a result, vignettes of McGee’s early life are given scant chance to settle, resulting in a disjointed narrative flow and a lack of impact for each moment (as well as an odd-feeling imbalance to much of the sound mixing in these scenes). The rise of the Sex Pistols, for instance, is presented as a formative moment. Still, the film doesn’t communicate this beyond a young Alan (Leo Flanagan) jumping around with an air guitar, nor is the influence meaningfully revisited. In particular, this failure to establish Alan’s early relationships and experiences undermines the film’s attempt to hark back emotionally to this period later in the story.

There are sparks of humour in CREATION STORIES, with repeated visits to the McGee holiday dinner table proving amusing to anyone who has used an electric carving knife. Jason Isaacs’s appearance is a comic highlight, but – as with so much of CREATION STORIES – it is adrift from anything else in the film. Even the music for which McGee and Creation Records are famous is given limited time to make an impression and not left to linger, almost as if the filmmakers fear (erroneously) that it might be considered passe. There are directorial flourishes from Nick Moran – a disorienting swoop back from a bank manager’s desk, for instance – that have all the hallmarks of Danny Boyle’s (an executive producer here) psychologically nightmarish shotmaking, but they add nothing to communicate a state of mind or situation. These touches are not applied to communicate McGee’s descent into drug-related illness but instead at seemingly innocuous points, creating a conflicting tone the film never really resolves until it moves beyond the period of McGee’s recovery.

There is a late attempt to bring some substance to the story by puncturing the bloated egos of Tony Blair’s New Labour, but it is skipped over quickly and is satirically weak (sharper work has long since examined Peter Mandelson’s ‘Prince of Darkness’ credentials). This skimming is unfortunate as it could be fascinating to unpick the influence of McGee and Britain’s cultural landscape on the most significant political rebranding job in modern British history. A late and bizarre swerve into Operation Yewtree territory is also incongruous and tonally dissonant. Its presence acts more as a needless cinematic cry of nonliability than anything narratively useful.

CREATION STORIES occasionally hits a good note, but after the cacophonous entropy it generates getting tuned up, it struggles to recover anything harmonious from its orchestra of creative talents.