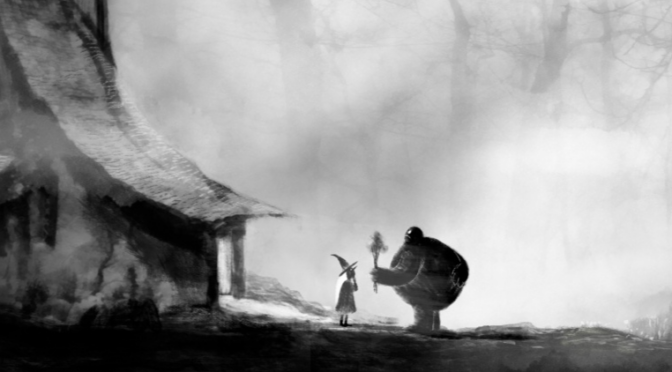 If there’s one running theme of the absolute tyre fire that was the year 2020, it’s that we always need ways to escape. As such, it’s suitable that this block of the long-postponed 2020 Edinburgh Short Film Festival focuses on this very topic. Compiling an eclectic collection of live-action and animated shorts, ESCAPE PLAN explores the myriad ways to get away from it all in a versatile set that ranges from charming and touching to thrilling and downright spooky.

First up, we have SHE LIVES ALONE, a horror-tinged period film about Maud (Rachel Teate), a young woman living alone and trying to shake the spectre of her oppressive and cruel mother. Teate’s performance is the main event here, with her fraying-at-the-seems severity easily selling the dark, desperate acts that Maud takes in the final minutes. Inspired by the local ghost stories of writer/director Lucy Rose’s childhood in rural Cumbria – and elevated by some outstanding costumes and set dressing – this tale conjures a confident, sinister atmosphere, evoking the folkloric style of Robert Eggers’ THE WITCH.

From there, Escape Plan trades apparitions for expeditions in the Austrian road movie, FAVOURITES. Here, we follow the story of a teen runaway, Sofia (Lia Wilfing), as she hitchhikes to Italy in search of the father she never had, after falling out with her mother. She catches a ride with Michael (Christian Dolezal), a middle-aged man with troubles of his own. From there, we get all the expected beats of a road trip: reluctant bonding, bitter confrontations, and eventual realisations of genuine connection.

The standout of this block, FAVOURITES takes an over-familiar concept – two differing personalities finding common ground on the road – and manages to soar, thanks to writer/director Martin Monk’s intimately relatable script and the exceptional performances of its two leads. Newcomer Wilfing balances the volatile emotions of a teen runaway with an impish sense of humour. Dolezal expresses a great sense of depth and tenderness in a man whose backstory is mostly side-lined. With chemistry that encapsulates the idea of spiritual father and daughter, this is pure, heart-warming humanity, as any good road movie should be.

The themes of escaping by car continue with DETOURS, but the goodness of humanity got off at the last stop. Instead, director Christopher Yates serves up pure dread for pretty much the entire 18-minute runtime. Simon (Yannick Renier) is already having a bad enough day: he’s rushing to get his baby back to his ex – who has threatened to withdraw custody if he’s late again – when, in his haste, he swerves and knocks the wing mirror off a parked car. Driving away, Simon soon realises that he’s being followed.

Visualising a nightmare that most drivers can relate to – that one person you cut up on a roundabout following you home – DETOURS manages to turn the usual frustrations of running late and gridlock traffic into a nail-biting game of cat and mouse. Renier’s frazzled, increasingly erratic performance, along with some well-executed stunt driving, keeps this ride pulsing with the same kind of relentless tension that resonated throughout Sam Mendes’ 1917. If FAVOURITES is the film that pulls you in the most, then DETOURS is the one that will stay with you the longest.

Thankfully, after that heart-stopping ride, Escape Plan pumps the brakes and switches gears to a couple of lighter pieces. The stop-motion animation KEITH WATERS is a “small film about a small river,” created by director Izzy Gibbs entirely during the first UK lockdown. Made with found materials, particularly wood from the aforementioned river, and scored by a gentle acoustic guitar track created by Gibbs’ father, Jonathon Gibbs, this peacefully zen escape into nature is the perfect antidote to lockdown fatigue.

The block closes out with its shortest live-action film and two more animation projects. CLICK, the most comedic of the bunch, is another project completed during the first UK lockdown. At only one minute in length, David Hutchinson’s self-described ghost story takes the escape themes in an unexpected direction and finishes with a fun, homemade practical effect that distinguishes it from the rest.

Easily the most visually intriguing of the block, HOMELESS HOME is a deeply existential folkloric animation from Spanish animator Alberto Vásquez. Wrought in a transfixing greyscale oil-painted style, with the odd splash of red, this fantasy-fused film explores some of the bleakest elements of the human experience – abuse, loneliness, melancholy – with decidedly inhuman characters.

Orcs, witches, weird yak creatures with human faces – all manner of fantastical beasts deal with drudgery and disillusionment in the desolate doldrums of existence. The philosophical nature of their musings can be a little heavy, but the inescapable sense of doom and despair actually helps to unify the more disparate vignettes under the central theme: “No one can escape their roots, however rotten they may be.”

And finally, there is PROJECT ABILITY, a stop-motion animation completed at the Glasgow studio of the same name. Made from mostly recycled and repurposed materials, creator George Farrow-Hawkins’ intricately crafted sets depict tiny artists making tiny art, including a great bit of clay-ception, as one mini-creator makes their own stop-motion film.