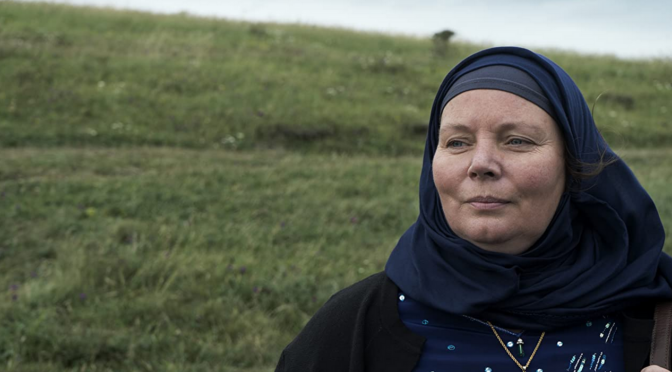 AFTER LOVE is the debut film of British-Pakistani director Aleem Khan, taking the story of Mary ‘Fatima’ Khan. After the sudden death of her husband, Ahmed, she discovers that he had a secret lover and son in Calais, just over the Channel from their home in Dover. The film is a beautiful exploration of the complex and complicated emotions surrounding this revelation on top of raw grief and loss.

Khan’s biography on the BAFTA website says he was influenced by Italian neo-realism. This influence is evident in the directing style of the film; scenes are allowed to be lengthy and static as the characters move around the frame, going through mundane acts such as making tea and moving boxes. While foregrounding the mundanity that characterises Mary’s personal turmoil, it also allows the locations of the film to be admired in themselves. The iconic White Cliffs of Dover immediately tell us where the story is set and provides a striking visual metaphor for Mary’s emotional state. After Ahmed’s death, we have her staring out to sea on that cliff, still and solitary, listening to a voicemail her husband sent her warning her about going too close to the edge. Later, when she takes the ferry to Calais, she witnesses a rockfall down the Cliffs; her life and her understanding of her husband are crumbling right in front of her, and there is nothing she can do but watch.

The real strength of the film comes from Joanna Scanlan’s performance as Mary. Mary is devoted both to her husband and to the faith and culture she converted to for him. She prays regularly, wears a hijab, and takes part in community events like Aqiqah, an Islamic welcoming celebration for a newborn baby (compared in the film to a christening), speaks fluent Urdu and can cook traditional Pakistani dishes. She is never shown with any non-Muslim friends or relatives, and the implication is that her family disowned her for her relationship with Ahmed. Mary never speaks ill of her husband through the film; in fact, she doesn’t speak a great deal at all throughout the film. Scanlan expertly conveys Mary’s isolation, devastation, and insecurities while almost completely silent for the first half of the film. As she goes through the motions of everyday actions, her movements and expressions show the weight of what she is going through.

The performances Nathalie Richard as Genevieve (the ‘Other Woman’) and Talid Ariss (Solomon, Ahmed and Genevieve’s teenaged son) are also gripping, although not as sympathetic as Scanlan’s Mary. Genevieve is thin and pretty and clearly not Muslim, a stark contrast to Mary. She has a turbulent relationship with Solomon, who ironically accuses her of having affairs that keep his father away from them. She takes one look at Mary’s hijab and Salwar Kameez and assumes she’s a cleaner. Despite her flaws, Genevieve cares about both her son and Ahmed and is concerned when she can’t get a hold of the latter.

The existence of Solomon further complicates the dynamic between Mary and Genevieve. Mary lost a newborn son many years ago, and Solomon represents the one thing she couldn’t give to her husband. For Genevieve, Solomon represents the best half of his father, a half the wife in England didn’t have. Solomon is a narrative mirror for his father, split between two different women, keeping a secret from one which is known to the other: one more tragedy in an understatedly tragic film.

However, the film ends on an oddly bittersweet note. All three characters are in mourning for the loss of a major part of their lives. Regardless of his sins, they all loved Ahmed, and there is something to be said for the bonding nature of grief in Mary’s ability to share parts of her husband – especially her husband’s religion and culture – with his son who never knew that side of his father.

AFTER LOVE is a very moving yet simple story of grief, loss, and sacrifice and an observation of the role the blending of culture and religion plays in peoples’ lives beyond the traditional structures with which we are familiar. It is a quiet and visually gripping film, bolstered by an exceedingly strong leading actress, telling a story of ordinary people grappling with hardships in a realistic and completely natural way.