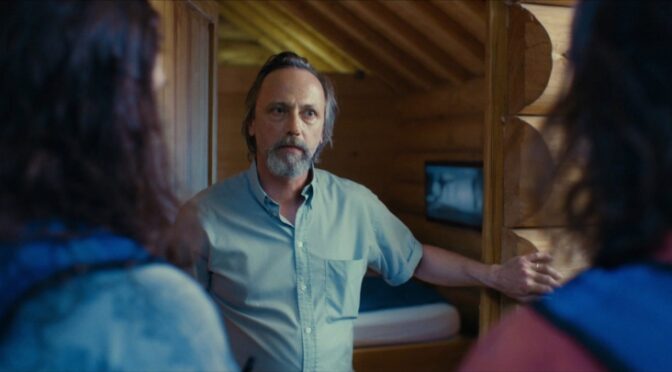 GUILT, THEN ABSOLUTION? is a diverse program about sin and reconciliation, boasting a variety of genres and screening as part of the postponed 2020 Edinburgh Short Film Festival.

Writer/director Marie McCourt’s I WAS STILL THERE WHEN YOU LEFT ME is undoubtedly the strongest entry, with exemplary direction and entirely convincing performances. Inspired by the Grenfell tower tragedy in London, this intimate drama captures a towering inferno through the eyes of a child. Feeling responsible for the fire consuming a tower block, Lila is carried to safety by a young neighbour, Karim, and watches in silence as his friends fear for someone still trapped inside.

Opening in handheld, the camera weaves through a crowd to follow Lila, frantically gazing upwards at an unknown event. The glow of street lights offset the night sky, and the screen is filled with a warm, orange hue that immediately pulls the viewer into the action. Cutting back to earlier in the night, Lila is carefree as she dances among a circle of young black men. The camera remains at her height for much of the film, bringing the viewer to Lila’s view of the world. She is delighted and exudes confidence, implying she spends many of her days with these much older guys in her father’s absence. She clearly appreciates the attention, and this moment of happiness is effectively contrasted when the same group fight over how to help their trapped friend. Only this time, Lila is welcome to be on the outside of the circle, looking up at the hostility and thankful to remain unnoticed.

The film is comprised of intimate close-ups and wonderful, tense moments of silence. Lila stares in blank confusion as Karim gently wipes the ash from her face and gently ties her hair into a ponytail. Isolating themselves in a bathroom, they sit together in a calming silence, with Karim watching over her as she leans her head on his shoulder in a touching display of trust. Dialogue is used sparingly, the performances authentic, and the direction encourages empathy by placing the viewer directly alongside this small girl, excellently capturing the swirl of confusion and chaos. The fire itself remains unseen but feels ever-present in the emotions of the characters. McCourt utilises lighting and sound to suggest the scene in the viewer’s mind, focusing instead on quiet moments of uncertainty amid tragedy to ensure that her film never once feels exploitative.

Taking a sharp detour from modest tower blocks to French chalets, musical-comedy FIN DE SAISON (Matthieu Vigneau) follows Douglas (Jean-Luc Vincent), the owner of a summer campsite, who discovers a severed, tattooed tongue in the river and recalls a lustful sin. It is all incredibly bizarre, featuring several peculiar songs and much of the humour derived from the actors somehow delivering everything with a straight face. Watching a rather solemn, middle-aged man shaking his hips around a kitchen and grooving in nothing but a towel certainly grabs your attention. The narrative is a little scattered, including a young boy whose subplot is particularly vague, but what the film lacks in resolution, it makes up for in style. Douglas’ late-night rendezvous with singer Audrey (Lola Le Lann) is filmed with striking flashing lights, overlays and slow-motion shots to convey the intoxicating energy of a forbidden encounter.

Martin Clark provides another story of lust in JEALOUS ALAN, a Scottish comedy wherein Alan (Ryan Hunter) attempts to steal his best mate’s girlfriend. The film illustrates how these characters spend their day staving off boredom by strutting around the park in leather jackets and shades (despite a total absence of sun) and drinking cheap vodka from the bottle. Clark effectively creates an atmosphere of restless, self-obsessed youths looking to waste the day away in their dreary village before they inevitably have to make something of themselves. There are some noteworthy shots, supported by a natural, earthy colour palette, but the sense of guilt never really shines through. Aside from some implied homoeroticism, there is little dramatic conflict and an overly abrupt conclusion. Intended as a ‘slice of life’ narrative, there is potential in the premise that could be fleshed out into a compelling feature film, but Clark struggles to convey all of his ideas in a short format. There are no discernible character arcs or meaningful lessons learned, with an unflattering view of its female character in favour of male arrogance and bravado, irrespective of the director’s actual intention.

UFO (Harvey Gardner) offers a glimpse at familial guilt as two brothers stumble upon their estranged father, who left home to join a group of alien-obsessed monks. Gardner’s direction supports the awkwardness of the chance encounter, including a brief animated segment that plays like a hallucinogenic retelling of the fathers’ (Gilly Gilchrist) new life and welcoming of his sons into the fold as they bond over his new ‘calling’. Vibrant colours provide a retro sci-fi aesthetic, while overlays of the trio reconnecting by a campfire through beer and weed provide a cosy, disarming sense of euphoria. The script subtly indicates that one brother has held onto hopes of a reunion more than the other, who is more sceptical of his father’s presence. As they watch an old sci-fi movie in the darkness of the cabin, their faces illuminated by the cold glow from the screen, a series of lingering close-ups reveal the disenchantment and immense guilt swelling between father and son. The joyful reunion is over, and difficult questions must be addressed when small talk will no longer compensate. For how long can one continue the charade before reality beckons? Do you potentially destroy the world of a man who seems desperate for escape and meaning with mundane rationality? UFO avoids answering the big questions but teases several avenues for which the story could continue. It seems fitting Gardner should settle on the unexplained, with these wandering brothers seemingly abducted out of nowhere for one strange night with a man from another world.

The shortest entry is S*!T (Simon Wegrzyn), depicting a terrible person overly eager to get a questionable second chance in life. This effort doesn’t quite fit with the rest of the programme as there is no actual display of guilt; with such a rapid and short narrative, it, unfortunately, fails to flesh out a premise that could otherwise be quite intriguing.

Alusine Kamara’s thought-provoking THE RETURN charts rapper Fal G’s homecoming to the village where he once committed atrocities as a child soldier during the conflict in Sierra Leone. The subject recounts his traumatic past with matter-of-fact honesty, supported through direction, which is sometimes simple but admirably restrained to not distract from the seriousness of the objective. The audience is shown mass graves of horrific brutality lying amid an otherwise peaceful landscape without ever glorifying the rapper’s mission for repentance. His face is that of partial disbelief as villagers readily forgive his transgressions, such as when he kneels before a woman who appears drained from tragedy and knows that no good can possibly come from hate. This is a brave display of capturing one’s sins on film for all the world to see. He knows he will always carry this guilt with him as he strives to set an example for how people can evolve and reconcile themselves with the past. The closing images reinforce the great importance of forgiveness and how one must never forget the gift of empathy.