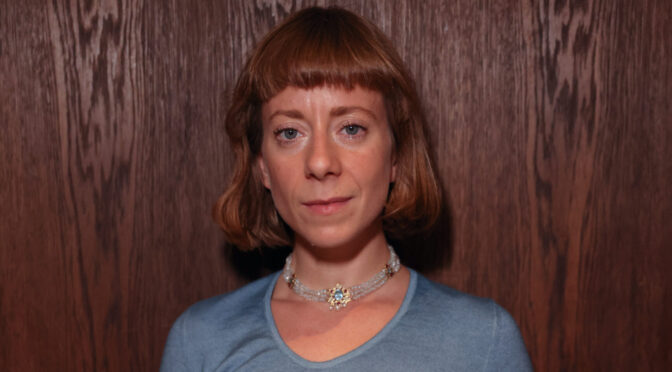 Set in the early 1900s in Northern Italy, Laura Samani’s debut feature SMALL BODY (Piccolo Corpo), follows the journey of a woman, Agata (Celeste Cescutti), as she gives birth to a stillborn baby, who is then condemned to limbo. In her coastal village, one of the locals mentions a ‘breathing miracle’, where a baby can be momentarily brought back to life to be baptised to save its soul. Rumoured to be located up in a sanctuary in the mountains, Agata sets out on a mission to have her baby receive this blessing. The road is full of dangers, with bandit gangs lurking in the shadows, and she is ambushed by the mysterious Lynx (Ondina Quadri), who strikes a deal with Agata in exchange for accompanying her to the church. In this harrowing, yet moving story, SMALL BODY demonstrates the way women have had to adapt to find freedom and autonomy in a patriarchal society, and the strength of myths and legends as a source of hope. Our Associate Editor, Elle Haywood, met up with Laura at the London Film Festival to talk about the history behind the miracle, preserving local dialects, and the importance of care on set.

TO: Thank you for speaking with us today Laura, how does it feel to have Small Body play at LFF?

LS: It is really warm and moving. After 5 years of working on the project, you have so many layers as an author, that in a way you don’t remember clearly any more what was the original emotion. So when you talk with people who are fresh viewers, and they just rectitude with you, their feelings, you may have felt that deep down two years ago, and this is amazing.

TO: How did the project kick-off, and where did you find the source material?

LS: I have been told by an old man about this thing [the breathing miracle], the same thing that happens to Agata in the film, there is an old man telling her there is a sanctuary. So I started doing research, and I got obsessed with it.

TO: Were you able to visit one of the sanctuaries, and shoot there?

LS: Yes, just the one that is still existing. But we didn’t shoot there, because now that I know of it, I wanted to build my own sanctuary in a way. Everything was shot in my region, Friuli Venezia Giulia, it’s really close to the border, a 20 min walk to Slovenia. These are places that I have visited since I was a kid, so I’m really connected to my region.

TO: Did your family or friends know of the myth before you made the film?

LS: Even though it was really common at the time back in the middle of the 16th century and when I set it during the 20th century, basically nobody knows about it. It is something that belongs to private libraries, and the Church. It’s not a secret, but it is really hidden into the memory. It might be more hidden as limbo doesn’t exist anymore* in a way, but also because Freud and psychoanalysis happened, so we are not referring to religion or faith for everything nowadays. It was peculiar, it was common all over the alps but not in other places around the world. The film is set in the early 1900’s as this is before Freud and would have been the very last moment it would be believable to tell this kind of story. Also, there is a song by a French band that I really love called Phoenix, and one of my favourite songs is 1901!

TO: Can you talk to us about your choice to keep the film’s language in the local regional dialect? (Friulian**)

LS: It’s a political reason for me. Italian is an invented language, and it was used to unify the country back in 1861 and then under fascism, it was forbidden to speak dialect. You could of course today shoot in Italian a film set back in the past but I didn’t want to. It would be more rewarding in a way to shoot in Italian according to what the cinema business is, but I don’t know it would not have felt right to me because it’s not believable they would have spoken Italian back then. I wanted people [the cast] to be comfortable speaking the language they speak in their brain. All the others, like Celeste, are not professional actors and they think in dialect, so I said go ahead [in speaking the dialect] because it is precious.

TO: The preservation of native languages is really important, and it definitely comes across. In terms of your own background, how did having a Catholic education impact the film?

LS: In Italy, it is the ground zero of culture, and is pretty useful for the history of art! It gives you the tools to understand society. But my family doesn’t go to church, and neither do I. For me, it is more about faith than religion, it’s about spirituality.

TO: Are you quite a spiritual person?

LS: Yes I am. I am a really superstitious person, but we don’t talk about it, no no no! It’s more about karma and energies.

TO: During the casting process, did you always have Celeste and Ondina in mind for the roles of Agata and Lynx?

LS: Celeste showed up to an open casting because we wanted to shoot a promo to rehearse and to raise funds, but she thought it was an extra casting! So she was really chilled out. Ondina is a pretty well-known actress in experimental theatre in Italy. We had a close mutual friend who kept pushing me to meet her, and I didn’t want to as she comes from another region and is an experienced actress, but I didn’t expect her to learn the dialect as well as she did! The three of us became really good friends. The first thing I think of is to think of the human being instead of the role.

“I wanted them to dream about it, to focus on their own fears in their personal life and bring that to the characters.”

TO: How did they shape the characters, and the script?

LS: In a way they did, but we were very loyal to the script. They wrote their attitude into the character, but the development of the story was already set. For example, I was expecting Agata to be really anxious and fragile, but instead, she’s physically and emotionally strong, and she has a lot of dignity. This was the first thing Celeste wrote in the character, and Ondina is the same. I really wanted them both to feel free to move inside the box of the role.

We walked a lot during preparation. The very first time Celeste and Ondina met was in the location of where the two characters in the film meet, and they were alone so I didn’t know what they talked about. They didn’t know they were meeting, they were just walking into the woods down the same path but from opposite sides, and they met! Then we spent a lot of time walking together on the mountains, physically rehearsing and talking a lot about the topics of the film, and went to the script later. I wanted them to feel comfortable with the topics, and not to start with the words, because it’s just paper in a way. I wanted them to dream about it, to focus on their own fears in their personal life and bring that to the character.

TO: You blend in so many moving themes in the film including birth, child-loss, and post-partum issues, that you treat with so much care and healing – how did you manage the atmosphere on set?

LS: It was really emotional, but also respectful. Everybody knew that it was a re-production of something that would happen in real life. When we were shooting these types of scenes, we were not making fun games or things like that. I clearly remember the evening when we were shooting the birth moment, I gathered all the heads of department and we were all new to each other at this time although the actors were close to me already. I gathered all of them and I was whispering, I was talking in a really low, low voice and asked them, ‘please that I know everyone is doing their jobs but to not shout or make too much noise, so to help those in front of the camera’. Because, no matter if we are working, they are doing the most in this bit. And we whispered all evening, all of us. We became like family, this is a particular thing for nice sets, and it was an amazing set. There were not many people, we experienced all of the COVID situations together and we bonded. We were mutually influenced by the mood of the actors, of me, of the crew, and we took care of each other.

TO: What was the biggest takeaway of the film for you?

LS: Some people definitely, some collaborators. There was this really stupid question I was told, which was supposed to be a patronising suggestion, which was ‘don’t trust anyone because you are the only keeper of the secret of the film’. I am quite the opposite! I work in a transversal way, I need proximity with people and to communicate with them. It’s a collaboration and I love it.

SMALL BODY has played at Cannes, Toronto and London, and is continuing on the festival circuit into 2021.

* The mention to limbo no longer existing, is a reference to the statement from Pope Benedict XVI of the Roman Catholic Church in 2006 stating limbo has been abolished, after centuries of following this.

**Friulian or Friulan is a Romance language belonging to the Rhaeto-Romance family, spoken in the Friuli region of northeastern Italy. Friulian has around 600,000 speakers, the vast majority of whom also speak Italian.