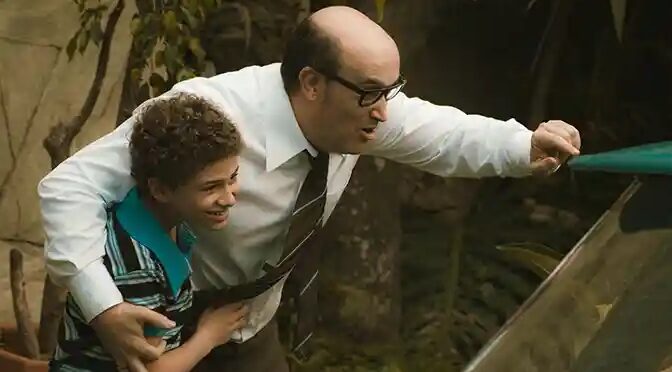 Héctor Abad Gómez (Javier Cámara) was a physician and university professor who advocated for human rights in Colombia. Adapted from a memoir by the subject’s son, director Fernando Trueba’s drama is both an earnest depiction of a tragic figure and a superficial study of his humanitarian ideals.

The film follows the doctor’s work through the eyes of his son (also named Héctor), played by Nicolás Reyes Cano as a child and Juan Pablo Urrego taking on the role as a young adult. Living comfortably with his parents and five sisters in a peaceful neighbourhood in Medellín, the young Héctor is ignorant to the city’s squalor. His father promotes tolerance and introduces him to the country’s wider problems, only for the boy’s carelessness to strain their relationship.

Split into two distinct styles, the boy’s childhood is filled with warm colours to reflect the nostalgic memory of a loving family and a time when he felt unburdened by the problems his father inadvertently brought into their lives. By contrast, scenes involving the university-aged Héctor are shot in black and white, effectively conveying the end of his childhood and the darkness threatening to define his adult life. Colour is drained from the film after a family tragedy during the midpoint. The cinematography does well to exemplify this fading happiness, showcasing the colder attitude surrounding the family and how Héctor is losing touch with the father he idolised. Unfortunately, the visuals have limited ability to bolster emotion when the script lacks a significant voice.

Héctor clearly loved his father dearly and admired his work, but he fails to be an entirely relatable protagonist. His early naivety is realistic, but he doesn’t make much effort to engage in the world around him. It is stated early on that he would become a talented writer, but this is never explored, missing the opportunity for Héctor to express his concerns and world views through literature. The audience never really learns what this character believes in, other than faith that his father is doing the right thing. The older Héctor is more self-absorbed, failing to engage in Gómez’s struggle for social change or find his own purpose. The character lacks weight on his own but scenes where he and his father share time together offer more interest and benefit greatly from Cámara’s affecting performance, exuding sincerity while being subtly comic. The father-son relationship is aided by their being the only men in the family. Gómez is depicted as a comforting figure who never loses his sense of humour in the face of great adversity. The script may not flesh out a particularly memorable bond, but Cámara does his best to fill in the gaps and show why he deserves such admiration.

The film would have benefitted considerably from seeing Gómez conduct his work and detail the numerous problems consuming Medellín, but this is restricted by the premise of mainly witnessing his actions through his son. Unfortunately, Héctor only glimpses the problems plaguing the citizens, leaving his father to address the situation through expository dialogue rather than delving into his humanitarian effort. When the teenage Héctor exhibits such a passive attitude, it makes it difficult to become too invested in the story and is a disservice to the real Gómez’s legacy.

There are several points where the film could have expanded on the family dynamic and given more material to the women in the story. There is never a strong sense of what it was like to be the family member of a figure deemed ‘controversial’ by the establishment. The film also fails to analyse their class privilege; the rest of the family remain in their own world, with Gómez the most interesting character but often stranded on the outside looking in. What should be significant events are glossed over to move the story along. Daughter Clara’s (Laura Londoño) fight with melanoma is hurriedly concluded in a montage with her singing the Rolling Stones’ ‘Ruby Tuesday’, photographed in a faded style akin to a home movie. Rather than explore how this affected the family, the sequence indulges in sentimentalism that refuses to get too deeply involved in these people’s lives. Similarly, the teenage Héctor’s drink-driving accident has no real consequence on his life, leading him simply to meet a girl before attending university in Italy. His aimlessness evidently disappoints his father, but this is never resolved, with scenes only providing a cursory glance at some conflicting emotions.

Ultimately, the film is effectively shot and competently acted but relies too heavily on Cámara’s honourable attempt to make us care about a variety of issues when the film’s actual protagonist seems uninvolved. Fernando Trueba is unsure of which path to take. The audience is never fully invited into the family to understand them as individuals, while the political and social aspects are largely a surface-level backdrop to explain Gómez’s dangerous position in Colombia. This biopic features some sweet moments between a parent and child but cannot fully capture the bond on which its entire premise depends.