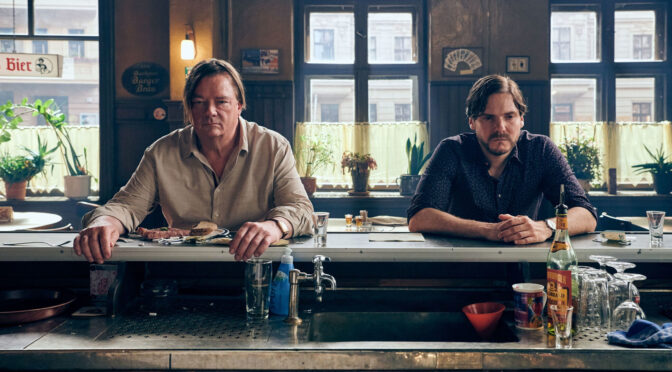 In his debut as a director, the actor Daniel Brühl delivers a more than halfway effective psychological thriller: that is to say at around the forty-five-minute mark the carefully built-up tension and dark comedy suddenly dissipates into something more familiar in movie terms and consequently less involving.

Like his namesake, Daniel is a feted movie star whose career has never looked back since the fallout from the collapse of East Germany. This Daniel too became famous via a movie like GOODBYE LENIN and he now lives in a plush apartment with his beautiful wife and children in the gentrified part of East Berlin with its iconic (i.e. unavoidable) view of the Communist-built Television Tower.

Daniel is now in the market for serious international parts which translates as auditioning in London for a Marvel Comics-type blockbuster for which he’s been sent just the one, security-protected page of the script. To calm his nerves, Daniel sends away the car intended to take him to the airport and instead totes his sleek luggage along to a local unreconstructed bar, appropriately known as The Dive. There he finds the dingy residue of East Berlin’s past, personified by a laconic embittered barmaid (Rike Eckermann) and in particular by the lank-haired running-to-fat Bruno (Peter Kurth).

The relationship gets off on the wrong foot from the moment Daniel, thinking Bruno wants an autograph, signs a napkin which Bruno wipes his mouth on and it becomes plain this former Stasi agent – or so he claims – has bigger fish to fry. For a start, he lives in the same apartment block as Daniel, and indeed his late father occupied Daniel’s apartment before being evicted to make way for its upgrading; now Bruno finds himself taking in the mail for Daniel and his family when they’re not around.

The audience by now is wishing that Daniel would just walk away but Daniel Brühl’s smartness here is to play on movie Daniel’s vanity – The Dive’s doors regularly open to admit awestruck fans wanting selfies, and Daniel is determined to justify himself and his career to Bruno, this symbol of the ‘Left Behinds’, even getting Bruno to read the movie’s truly terrible (as Bruno points out) one-page dialogue scene with him.

It’s only when the true nature of Bruno’s intentions start to become clear that NEXT DOOR, to some extent, grinds to a halt and the staginess of Daniel Kelhlmann’s script (based on Daniel Brühl’s idea) shows through: hitherto the performances, editing (Marty Schenk) and camerawork (Jens Harant) had kept it afloat. Now though we are in more straightforward stalker territory – even, dare it be said, an old-fashioned ‘yuppie nightmare’, and a coarseness can’t help but creep in.

Just as predictable is NEXT DOOR’s single act of violence which leaves the main characters in an acknowledged limbo from which there’s no escape, and a strange coda involving Vicki Krieps as a star actor in Daniel’s vein suggests the posh part of East Berlin is no place to be if you’re to escape the attentions of the Stasi completely.