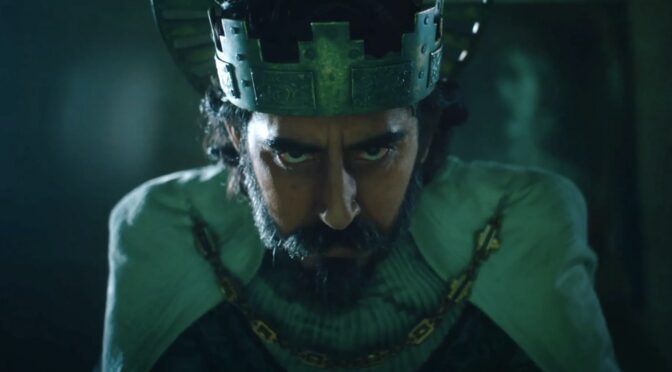 The Gawain of THE GREEN KNIGHT is not the same figure who drives the poem on which the film is based. There, Gawain is quick to action, pious, and guards a notion of his own chastity; here, Dev Patel’s Gawain is all too human, bawdy and often inebriated, in love with Essel (Alicia Vikander), and, as he tells Arthur (Sean Harris) and Guinevere (Kate Dickie), he is as yet without a story to tell.

His tale is initiated when the green knight (Ralph Ineson), half-man and half-tree, who on his dark horse cuts a striking figure somewhat like the Witch-king of Angmar from Peter Jackson’s THE LORD OF THE RINGS films, challenges the king’s court to a Christmas game: whoever is brave enough may strike him, but a year later, he will return the blow as given. Gawain, with much trepidation, decapitates him; but the knight retrieves his head and gallops into the distance on his horse, laughing.

Nearly a year passes, and the story of Gawain’s bravery has been propagated: it is told in taverns, with crucial details misinterpreted; there’s a puppet show of his deeds. At Arthur’s beckoning, he begins the trek to the green chapel, where he is to face the green knight once again. As soon as Gawain leaves Camelot, and his mother, who in this telling is Morgana (Sarita Choudhury), the cracks in the film become visible. In making Gawain less an archetype or a figure of allegory, in making him flesh and blood, prone to mishap and mistake, the film also succeeds in making him exceptionally boring. Patel, whose beauty and charisma usually make up for what his performances lack in range and technique, is overburdened by the scheme of Lowery’s film, which is overdetermined in meaning and portentous in execution.

The medieval world on film, in presentations as various as Kenji Mizoguchi’s SANSHO THE BAILIFF, Ingmar Bergman’s THE SEVENTH SEAL, and Andrei Tarkovsky’s ANDREI RUBLEV, tantalises by way of its difference from the present: the specificity of its cultural and religious customs, its systems of morality. In THE GREEN KNIGHT, the strangeness of the material and its setting has been aired out, meaning that the landscapes Gawain traverses are empty of an attendant atmosphere. Lowery and cinematographer Andrew Droz Palermo resort instead to imbue each locale (Camelot; fog-heavy forests; hilly climbs; water-logged fields) with a sense of visual awe that the film cannot sustain. From its opening montage of Camelot shot from low angles to unmotivated travelling shots, past the ridiculous pair of 360-degree panning shots in the woods, and then finally to the summit of the film’s stylistic redundancy (a brazen imitation of a similarly facepalm-inducing moment in Ari Aster’s MIDSOMMAR), when the camera rolls upside down as Gawain catches sight of giants roaming the land: all demonstrate the resolute lack of care that has gone into the film’s visual design beyond the cheap carapace of spectacle.

THE GREEN KNIGHT also joins a long and unillustrious line of films that, since they possess no visual intensity worth speaking of, outsource this to the films’ sound design and score (think MONOS, JOKER, and most recently, SAINT MAUD). In fairness, the soundscape has its moments: while the green knight arrives at the round table, Lowery crosscuts between Morgana practicing witchcraft; the echoing thuds of the green knight against the stone floors marries with the rich crepitating effects of her magic. But again, this is not sustained; and as Daniel Hart’s ominous score blares and whistles and groans, it has barely a passing acquaintance with the images with which it is meant to be interacting.

Lowery’s films are often concerned with characters who try to unearth or assert the meaning of their lives (or afterlives). Casey Affleck’s bedsheet-clad C in A GHOST STORY remains after his time to read the contents of a note, the motivating secret of his paranormal existence; Robert Redford’s Forrest Tucker in THE OLD MAN & THE GUN confesses that the imperative behind his criminal career is to live a life of charm and excitement that would make his younger self proud. Gawain, by contrast, is flustered by the series of encounters that amount to his quest; less an allegory of the soul’s progress towards death than a courting of it. In a film marked by a line of unproductive divisions and tensions (Christianity and witchcraft; ecocritical warnings and proclamations of human dominion over the earth; sexuality as conducive to love and sexuality apart from it), the least useful is the way the green knight himself combines a sense of Gawain’s predestined fate in the green chapel, and the repeated hints that Gawain is governed by a death drive. But this makes it all sound far more interesting than it is to experience. In fact, the only mystery in THE GREEN KNIGHT is why it’s so mild, when it should be something rich and strange.