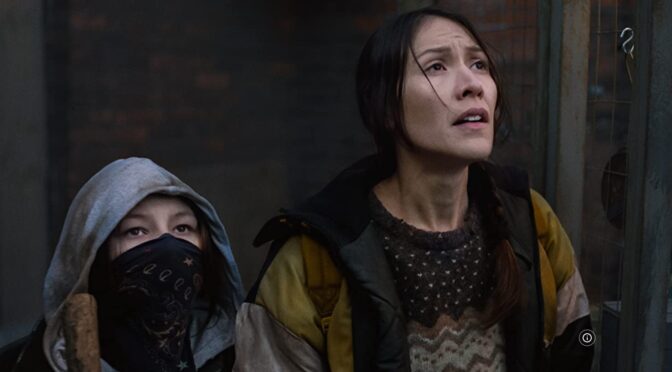 Two contrasting images over North American woodlands open Danis Goulet’s dystopian feature. The first has a narration in Cree speaking of giant mosquitoes causing pain and a promised saviour from the north. The second shows surveillance drones invading even these unpopulated regions. These are the first clues that not all is as it seems in this vision of a war-torn North America.

NIGHT RAIDERS follows Niska (Elle-Máijá Tailfeathers) and her eleven-year-old daughter Waseese (Brooklyn Letexier-Hart), a Cree mother and daughter living in isolation to avoid the new policy that has declared all children state property. However, this constant state of running is unsustainable against the long arm of totalitarianism, and the story leads both on arcs of discovery and survival after Waseese is injured, kidnapped, and taken to an “academy.”

Goulet, herself Cree and Métis, uses language’s hierarchies and the stories told by her characters to drive her narrative. As Niska joins a First Nations underground organisation trying to rescue the children, stories are traded in their Indigenous language from the members’ lives and further back: long oral histories that have survived numerous occupations. This tradition sharply contrasts with the new mythologies indoctrinated at the academy where Waseese is imprisoned. The “One country, one language, one flag” chant enforced at these academies brings to mind the schools Native children were forced into to “assimilate,” aiding North American colonial cultural genocide – a facet of continental history not far in the past. Naturally, nothing but English is spoken there. Language is an overt tool for repression as it is for liberation.

NIGHT RAIDERS never lets up its atmosphere of dread, in large part due to the meticulousness of its worldbuilding. Between drones and traps in the forest, vans full of soldiers on every road, and supplies airdropped into populated areas, this vision of post-war rebuilding paints a bleak picture of a future where a colonising power has used conflict to suppress all differences. While many sci-fi and fantasy elements emerge in this world, the horrors enforced and the obliteration of Indigenous voices mirror reality. “They will always come for us,” Niska is told – but in the same scene, there is hope in organised rebellion, liberation for love of their lost children, and eventual prophecy fulfilment. Goulet’s balancing act between social horror and mythic hope is a masterful cinematic parable.