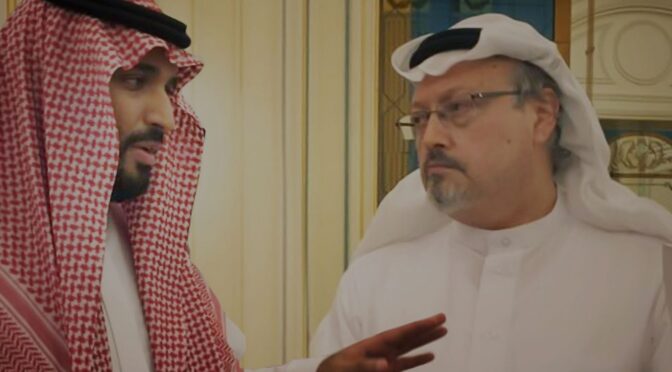 Bryan Fogel’s new documentary feature, THE DISSIDENT, dives into the timeline of Jamal Khashoggi’s assassination, looking behind the curtain at the political powers at play in Saudi Arabia. Much like Fogel’s Oscar-winning documentary ICARUS, he goes to dangerous levels to expose the political grit under the surface.

Fogel analyses the timeline deeper than we have ever seen before, looking at the news of Jamal Khashoggi’s disappearance and murder that unfolded during October 2018, in connection with the Turkish Embassy, the Saudi Arabian Monarchy, and Khashoggi’s conflicts with the regime.

The documentary opens with an interview snippet from a heavily featured Saudi dissident and friend of Khashoggi – Omar Abdulaziz. We learn of the macrocosmic scope of the political unrest surrounding Jamal Khashoggi’s assassination, with all networks leading and pointing to the Crown Prince Mohammed bin Salman at the centre of the plot. From ICARUS, Fogel’s reputation precedes him in a way, as the whistleblower director; an approach he continues with the Jamal Khashoggi case in THE DISSIDENT. Many people might go into this slightly sceptical of Fogel’s ability to penetrate and illuminate more than we already know from following the news a couple of years before. Fogel’s form of the story allows the people who worked with and were close to Khashoggi to regain control over this story without the Saudi Government’s interference in the narrative.

There is a particular emphasis on the social media control that operates within the Saudi state. Fogel does very well to illustrate, with Omar Abdulaziz’s aid, the power the state has over the information that can pass through platforms such as Twitter, with trolling accounts belonging to the regime capable of silencing politically critical voices from reaching audiences. In many ways, Fogel concentrates his documentary on the difficulty society has in trusting information under constant moderation and state monitoring. With higher powers possessing the capabilities to distort and change information, in what ways are all forms of news limited, particularly in areas that are not under democratic rule?

When discussing heavily political topics, it is easy to fall down a rabbit hole into one aspect of the narrative’s investigative side. Despite the case’s development remaining, at least legally, very up in the air, Fogel does very well to build a clear foundation to the story. We have personal links to the case through the people closest to Jamal Khashoggi, dissidents who remained in continuous contact over the web, and Turkish law enforcement investigators who were active during the case. Fogel does well to instil a compelling and thought-provoking argument into the desolate realities of the illusion of free speech, the reality that some people may be above the law, and what that may mean in terms of the sociological and ethical structures we claim are absolute.

What slightly dilutes the documentary’s tone is the overuse of dated graphics. These are mainly shown point the audience to an examination of power struggles on social media platforms between the regime troll farms and the dissident members growing in numbers to overcome the censorship imposed by the troll accounts. It wasn’t particularly necessary to have images of wasps landing on and stinging flies as a depiction of the uprising, and it almost cheapened the look of the documentary to a dated 1990s education video you’d see during your school years. But while some aesthetic trends propel us back to Netflix’s documentary catalogue, graphically mirroring THE SOCIAL DILEMMA, Fogel never loses the edge he has mastered from his electric debut ICARUS.

THE DISSIDENT is a powerful documentary that encompasses the intrigue, thrill, and in-depth analysis of a mystifying structure that makes it difficult for the discussions on screen to leave your mind after the experience.