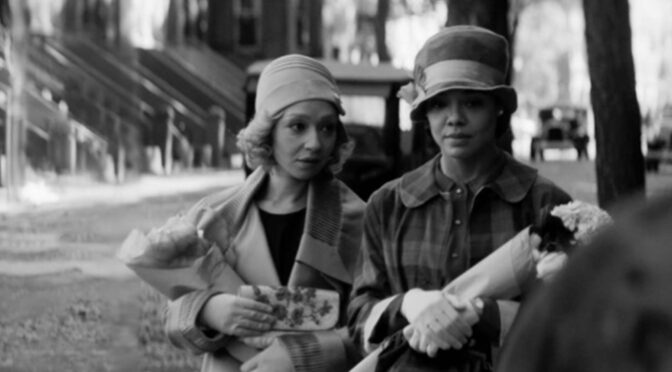 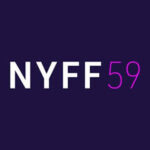 Rebecca Hall’s debut feature, PASSING, is a sumptuous-looking tale with a layered story anchored by subtle performances from Tessa Thompson and Ruth Negga. However, that sumptuousness frequently tips toward a visual and auditory fussiness that distracts from the flow between and within scenes and the contemporary echoes of Nella Larsen’s source novella.

Tessa Thompson leads as Irene, who bumps into a childhood friend, Clare (Ruth Negga), one day. After meeting Clare’s husband, John (Alexander Skarsgård), it becomes apparent that Clare is ‘passing’ as white, with her husband’s blatant racism evident when he assumes Irene also to be white. Indeed, Hall has already introduced us to Irene as she does something similar in miniature; buying a gift in a white-owned toy store, obscuring her face slightly to protect from too much scrutiny. Shocked at John’s bigotry, Irene is nevertheless fascinated by Clare’s life, even more so as the former friend indulges her own curiosity and begins to ingratiate herself with Irene’s husband, to the suspicion of Irene.

“…the black and white photography is the headline triumph and stunning to observe – especially around Irene’s household’s high contrast dark woods and bright windows. This look also focuses the viewer on a narrative that is driven by the visual perception of others.”

There is significant attention to period detail from Hall and her team, right down to the film’s audio. However, the black and white photography is the headline triumph and stunning to observe – especially around Irene’s household’s high contrast dark woods and bright windows. This look also focuses the viewer on a narrative that is driven by the visual perception of others. The clash between how Irene and Clare shape others’ perceptions of them and, indeed, of each other is where the primary thematic tension of PASSING resides.

Both women have sought refuge of a sort in a racist society. Irene has made a home where she feels she belongs (even if her husband would prefer to have left), taking fleeting advantage of ‘passing’ – Thompson even hinting towards pride in pulling it off – to make her way when needed. On the other hand, Clare has seemingly gone for a higher risk, higher ‘reward’ pursuit of fitting into this racist framework, even if she seems to lack satisfaction with what she has gained by passing for white with her family. Part of the tension derives from Clare’s desire to reconnect with her roots, but her increasingly overbearing presence threatens Irene’s carefully pitched life.

There are other strands to Hall’s film, including a colourist attitude on Irene’s part towards her darker-skinned housekeeper, echoed in the relationship between Irene and Clare, but much is left to lingering shots of the women’s faces. Thompson and Negga do an admirable job of delicately conveying the interior lives of both women. Still, when so much rests on their expressive but very understated interactions and individual close-ups, Hall’s aesthetic starts to feel a bit fussy.

“…when so much rests on their expressive but very understated interactions and individual close-ups, Hall’s aesthetic starts to feel a bit fussy.”

Whilst both the performances garnered and the overall visual scheme show considerable skill, the acting holds greater interest. Although individual frames can look wonderfully crafted, the film lingers in its ornamental visuals to the detriment of its pacing and general storytelling flow. The story progression feels a little stilted, with transitions between events struggling to carry meaning and subtle moments across different scenes. The visual beauty always leads ahead of the story, and the film’s momentum begins to sag, to the mounting cost of engagement and clarity.

A striking finale manages to regain some of the film’s focus, and PASSING is, overall, a commendably assured debut from Hall. Unfortunately, the performances she elicits aren’t blended harmoniously with the precise aesthetic; they feel in competition with one another. A story of how two women carve out their position in their society, PASSING still manages to find its position as a rewarding film with a unique angle on the issues its characters embody.